Life can feel like you’re in a tailspin with three kids.

Imagine for a moment you have a brain. Now think of an airplane flying through the sky and then imagine there is this heat-seeking missile that shoots out the back of the plane and stuff and the plane starts spiraling towards the ground. It doesn’t feel like that at all. What is wrong with you? Three kids feels like you don’t have any money and you’re tired.

Fifi had her christening/baptism a few weeks ago. She now can officially get into heaven. We had the immediate family over and a handful of friends from the area. Even though things were low-key, Anna and I were exhausted. The priest who married us conducted the baptism but he forgot he was supposed to be there and raced in 30 minutes late. It felt a little rushed but that is how our whole life feels right now. Fifi cried most of the time because she was hot in this oversized white dress. Poor doll.

My brother was the godfather and Anna’s friend Kim from medical school was the godmother. My brother came into town with his girlfriend MacKenzie (sp?) who was not the daughter of Michelle and John Phillips from the band “Mama’s and Papa’s” who later went on to have sex with her father. Disappointed yes, but I suppose things are better that way. Everyone had fun but we were exhausted.

The saga of Stella and Xavier’s toddler beds continues. They will not stay in their beds and some stupid law says you can’t chain your kids to the bed. I don’t usually follow the law like when I drive around town using my feet to steer the car but this is just too risky.

During every bedtime someone will start crying and it’s usually Stella. When we walk in the room, she always says the same thing, “Sa-voosh hit me.”

Xavier gets called by is cutesy Polish name and that is what Stella is using. It took us a while but we later figured out that he isn’t always hitting her or he hits her after she bites him. Nice huh?

We went for plan B; and I don’t mean the morning after pill. Which would actually be the “800 mornings after pill” and it wouldn’t work.

Anna got this baby monitor that not only lets us listen in on them but also has a feature where we can press a button a yell at our kids through the speaker. We put the intercom in their closet during naptime and got ready.

Why did we put the monitor in their closet? Because for the last three weeks no matter where we hid the baby monitor they found it and unplugged it.

Why do we still use a baby monitor? Because we can’t hear them crying form the first floor of our house.

Why can’t we hear them without a baby monitor? Because we are so loaded we bought a house that is so big we can’t hear what is happening in the south wing. We also have a Yacht name “ Paris of the Sea”. It is very skinny.

Let’s get to the punch line. Things start off typically enough, we hear the kids jumping around on their beds beating the crap out of each other. Anna yells at them in Polish through the new baby monitor.

Greek people are supposed to beat their children with a wooden spoon but I didn’t feel like putting in the effort to go upstairs because our house is so huge it’s like a mile to get to the bedrooms.

Things got quiet for a little bit and then things get quiet for long enough that as a parent you learn when too quiet means trouble.

Next thing I know I hear the kids playing with the baby monitor. Oh crap! I hop up and run five miles to the bedroom. When I open the door all I see is this big pile of clothes on the floor and one of the closet shelves removed. Since we are rich they have tons of clothes; all name brands, mostly Prada. I threw the clothes on the floor of the closet and told the nanny to clean it up on Monday. The nanny’s life must suck.

Then they start yelling, “Mama in closet”. What the hell is wrong with these kids? They clearly saw their mother walk out of the bedroom. How in the world would she get in the closet? I give up. They are going to live with nuns at the orphanage for special needs children. Do they even have those anymore? They better build one. 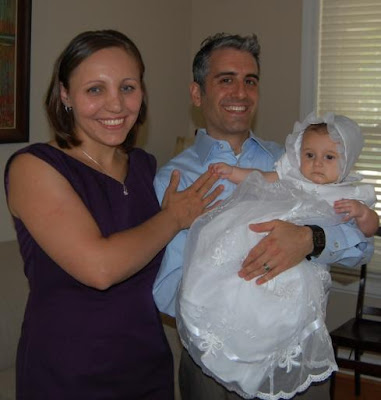 Here's a bonet now wear it and like it. 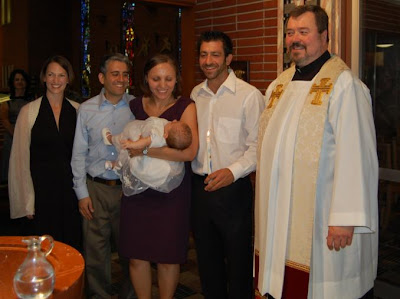 Everyone in this picture is pure and holy. 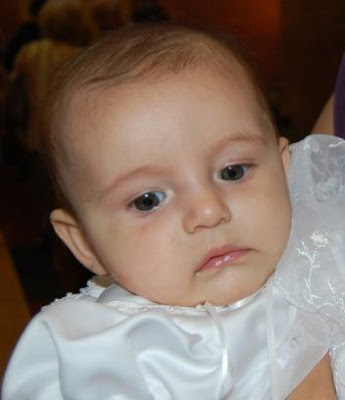 Someone make a doll out of this kid.
Email Post
Labels: baptism