August 29, 2011
We finally got some money from the insurance company to repair our basement’s water damage. Now I have the funds to get that brain operation I’ve always needed.

The check was enough to cover new floors with extra left over to put towards installing a back flow system under the front lawn to prevent this from happening again. Obviously, we’re not going to use any of the money to replace the kid’s stuff.

They have too much already and our kids are not a priority. You know they’re going to grow up to be spoiled brats no matter what we do. Fo-Shizzle. Sometimes I wish we were on welfare so I could use that cool card at the grocery store that makes food free.

The twins haven’t even realized that many of their toys are missing. In fact, once we finished having the new carpet put in they were so excited about all the extra space they had to run around in. That’s good to know. For their next birthday I’m throwing all the toys away and giving them extra space like what poor kids play with.

We had vinyl “wood” planks put in the bedroom and carpet in the man room. I love the vinyl planks. They look like wood and don’t feel fake like laminate flooring or silicone breast implants.

Wood should always be your first choice in flooring; by the way, then tile. Never carpet! I hate carpet so much I could murder it. But, it’s the basement and the kids need somewhere they can run and fall without cracking a head open. I always tell them, “If you’re going to fall and get hurt, do it at a rich person’s house so we can sue the living hell out of them.”

Do you remember when everyone and their mother had wall to wall carpeting in every room in their homes including the dining room, and sometimes even the bathrooms? Now you can’t even find that much carpet at a lesbian Christmas party.

The carpet we chose was from the Martha Stewart collection. I’m a total sucker for anything that says “Martha Stewart”. My right brain tells me it’s only marketing but my center brain thinks it must be better because Martha Stewart puts it in her own home. She does right?

Home Depot did the install. I'm not a fan of dealing with their poor customer service. It's like Home Depot hires one really competent person and then fifteen brain dead people that refer everything back to the competent person. But, I'll put up with it since it ends up costing at least a thousand dollars cheaper than a carpet store. And, Empire carpet is awful. Never use them.

Topic change: Bill Clinton is now vegan. As a fellow vegan, you go Bill and don’t ejaculate on any more interns. 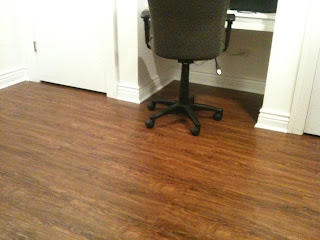 Check it out! Plastic floors made from earth killing oil look just like wood. It's better than linoleum or carpet. The pictures came out a little blurry. Click to enlarge. 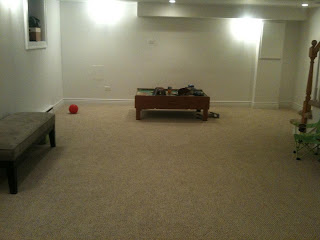 The kids still have some toys. They've got that there red ball and that train table.