We have left hell home


Finally we have moved out of our first floor rental into our new very old home.

It would not have been right to move out without some more rental property drama.

The guy that was throwing rocks into our windows came back. I shit you not! So it’s like 10:00pm and we are all in bed when someone comes knocking at our door. After some back and forth yelling through the door to figure out who it was I opened up.

It was the next door neighbor (the same one the called the police when the window was broken only a few weeks earlier).

She tells me she saw the guy that broke the window sneaking back and forth across the front lawn looking into the basement windows and hiding behind the cars in the driveway. She watched him for 30 minutes until a dog walker came by and then he ran away.

I assumed she called the police. Except no police arrived. So I asked her “Did you call the police?” "No", she tells me because she wanted to wait until he did something.  But, she showed me that she had dialed 911 on her phone and was ready to hit “call”. 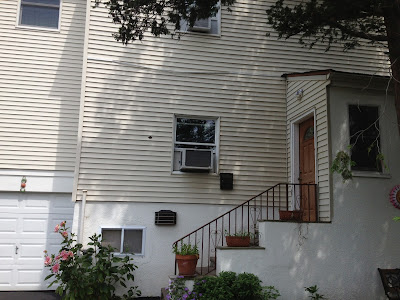 This is the door where the neighbor was knocking but not actually
calling the police.

Ok. Argh. I called the police. He took a statement and the land lady reviewed the security camera. This time she could tell who it was and admitted to knowing the guy. She would not elaborate on how she knows him and as of this point I have no idea if he has been arrested.

The day before we moved out (and a week before we legally had to be out) the land lady was all, “I think you forgot to pay rent for the last month you were here.”

I’m all like, “One, why are you telling me this after an entire month has gone by? And two, no, I paid you”.  I have NEVER missed a rent payment or mortgage payment my entire life. 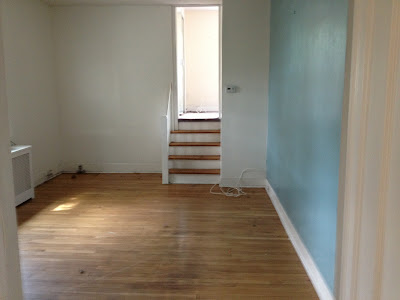 This what our place looked liked after we moved out.
It's not so bad if you don't mind being MURDERED!

I pulled all the check records from online and typed up a letter matching each check with each month we lived in the house and gave it to her. She called me the next day saying she was confused and still thinks we missed paying one month yet could not tell me which month we missed or how many payments she was expecting.  I told her to call when she figures it out. I have not heard from her since.

Our move went smoothly. We moved back into the city but it was only about 10 miles from our rental house and we don’t have that much stuff.

The family on our one side is a Greek family and the guy loves to talk. He told me how much he loves the neighborhood and told me the ethnicity of each neighbor;


There are going to be a lot of dead baby lambs on this street next spring.
Email Post