As the French say, our Toilet is eating Foi Gras

It's been a little over a week since our bathroom remodel has started and it's moving along pretty smoothly. We have this great Albanian family doing the work. At least, some of them are related. I know there is a dad , brother, son , cousin and another cousin. Luckily, this isn't West Virginia or the Dad would also be the brother! 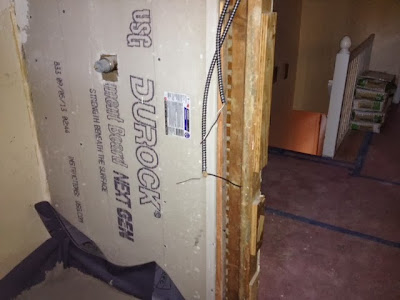 Don't things look great? This is the wall that divides the shower wall from the hallway. It used to be a door. The door was taken away and now it's a wall. This is known as science. 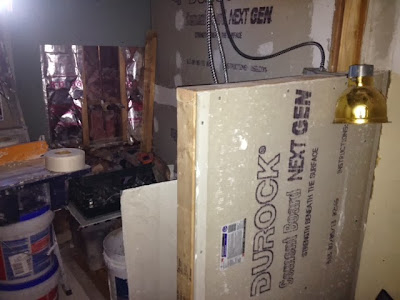 This is the wall dividing the shower and the tub. If I provided a floor plan it would be easier for you to understand what is going on but just try and do your best like what we tell kids that suck at everything.

It really was like The Crusades trying to decide on a height for this wall. At first I wanted the shower to have three walls going all the way to the top of the 10.5' ceiling with a a single frame-less glass door. But, that really closed off the bathroom...and the shower isn't that big already; maybe 33"x 36".

So, it was definitely better to have a partial glass wall separate the shower from the tub and make the bathroom and the shower look bigger. What would Jesus do? I have no idea, but the wall couldn't be too short or the tub on the other side would look weird. More about the tub in a future post. (can't wait right?...too exciting....bathtubs).

The wall ended up being 4' tall. Yes, 4'. That little line thing above the 4 means feet. We'll have to get a glass company to make the wall because I really have no idea where glass comes from. 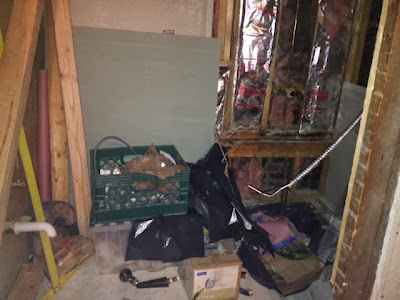 This is what it looks like from the hallway. That green thing is where the closet door once was and on the other side is the new shower.

We haven't been too inconvenienced by this project as you would have thought. I take that back. I have no idea what you are thinking. I'm not a mind reader!!!! I never said I was!!! Screw you man!!!!!!!!!!!
Email Post