July 26, 2015
The hot summer reminds me of when I was little , living outside in a park, after my parents were evicted from our apartment for running a Chinese prostitution ring.....would be a cool narration for the opening scene of  a movie.

We have two nannies. "Mean nanny", who is experienced and serious and "fun nanny" who is the not experienced but is young and has lots of energy. "Mean nanny" is the main nanny and she takes the kids to the beach or zoo and then they do stuff like this. 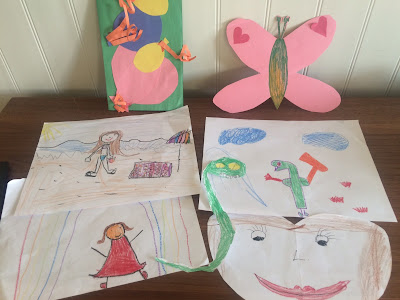 And then there's "fun nanny" 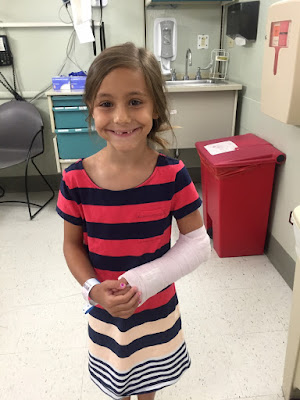 So "mean nanny" was looking a little exhausted after five long days with the kids so we had "fun nanny" watch the kids for one day last Thursday. Towards the end of the day she called Anna all alarmed and said Stella was climbing up the slide and her brother was going down the slide and crashed into her. Stella fell off the side of the slide and hit the ground and was complaining her arm hurt. Anna was all "she falls all the time, don't worry about it."

When I got home from work "fun nanny" told me the same thing and I was also all like "oh, she falls all the time". Anyhow, Stella was complaining and complaining so I gave her some ibuprofen and Benadryll so she'd shut up for two seconds.

I'd like to back up for a moment because I don't feel like editing this post so it is in chronological order. "Mean nanny" and "fun nanny" were both our top choices for nannies but we picked "mean nanny" because she had more experience and could drive. We kept "fun nanny" around when we needed a backup.  These two are like complete opposites and I really should have had them fight it out in giant Sumo wrestling costumes to see who could be top nanny.

Also, "fun nanny" can't remember the kids names. She refers to them as "the boy" or "the little girl" or "the other girl".  I mean like, WTF.

It's ok because the kids can't remember her name either They refer to her as, "the one that watched us yesterday" or "the one that took us to the big park".

Maybe this is a sign they've had too many nannies.

Ok, so back to Stella's arm. The next morning was Friday. I had already taken off work to give both "mean nanny" and "fun nanny" a break.

Stella was STILL complaining about her arm hurting.  It wasn't bent in half or anything but there was a good chance the bone had a crack in it.

Regardless, Stella wanted to go to ballet class. Anna worked the overnight shift in the ER so she was already in Manhattan a few blocks from the ballet academy. The plan was to hand broken child off to Anna after ballet.

...A quick blurb about that, it was recommended to us that we move Stella to an actual ballet academy because she was showing more ability than the community ballet school. Hopefully this will save us on food when she learns about anorexia, amphetamines and cigarettes.  I read once that parents should always raise girls to feel bad about their bodies.

I parked the car with the three kids and took Stella up to her ballet class. The class had just started. I opened the door and was all "Hi, we think Stella broke her arm at the park yesterday but don't worry , she's going to the ER right after dance class."

After class I dropped her off with her Anna and then they went to the ER.  An x-ray machine proved her arm was broken and stuff so the people who work at hospitals put a cast on it and gave Stella kid's codeine. It tastes like heroin.

The kids were very excited about the cast,

They told me, "It's just like our other friend who fell out a window last week and broke both her arms."  That kid doesn't have a nanny. Her real parents let that one happen.