Orphans who have dead parents and Elves that don't care.

Stella is the lead in her school Christmas play. The play is about kids living in an orphanage and and how much they love it. Their only wish for Christmas is to be adopted together so they can still be a family since God killed off their parents apparently.

WTF! This is a Catholic school FYI if you wondered how the hell any sane person would come up with such an idiot idea for a play. Does anyone still live in orphanages?

Ok, sit down and shut up. Let me tell you how I would have written this play.

All these kids are in an orphanage run by stressed out, underpaid nuns that have no experience raising children. They use the kids as slave labor to make crap in the nun factory which is then sold for a profit. Most likely they make sweaters.

Kids  get beaten on a regular basis for no apparent reason. (We will use ketchup for blood).  Occasional the kids are told they will be going on a fun day trip but instead are put on a boat to Australia. The kids get sexually assaulted a few times a week but no one seems to care.  Queue the music.

Merry Christmas. Jingle Bells , Batman smells......Sinead O'Connor walks onstage and rips up a picture of the pope, "This is the real enemy!" Then, Tiny Tim "walks" onstage and proclaims,   "God Bless us Everyone" . Then the entire cast from 1984's Band Aid performs  Do They Know It's Christmas .

Somewhere in my play we work in  a kid using a cardboard box to dress up as a Christmas present because I always think that's funny. There would be a red bow on said kid's head.

We have an elf on the shelf. I'm not a fan of it. I'm ok having one and telling the kid's it is pretend but I do not like pretending it comes alive and flies back to Santa to tell him if they are good or bad. I hate watching my little one talk to it thinking a stuffed doll will send a message to the North Pole. The elven-smiths of Eregion made the Rings of Power and you're bringing messages to Santa? Um, hello.

I'm playing along for now but each time they ask if it's real I say, "Why do you think it's real? Can you develop a hypothesis and test it?"

Anyhow, we bought a new Elf on the shelf this year because the one from last year went to the North Pole and didn't come back. This time, we bought the "dark skinned" Elf so we could have an elf that better reflected our friends. He's not that dark at all I might add. 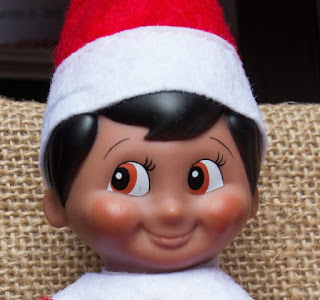 The next morning the kid's were surprised to see him on the picture hook. I listened in as they talked about naming him.

They decided to name him "Brownie". Um, no. They went with their second choice. "Smiley".
Email Post