The Ultimate Guide to Finding a Nanny

This would make the third post I've written over the years about looking for a new nanny.

Every time we buy a new nanny, they last only about 3 years.
Our current nanny only lasted 2 years because she is horrible with a capital whore.
Incidentally I re-watched the movie , "Don't tell mom the babysitter is dead" from 1990 and those kids put the babysitter in a box with a note that said she "died of natural causes" and dropped her off and the memorial place.
Kids were so much more resources in the late 80s early 90s.
While phone screening a woman I asked, "What are you doing now?".
She's like "I'm watching a 4 month old baby but it's too hard. I need something less demanding"  . I told her I'll call her back never. For Christ's sake we have three kids. It will be a lot harder than a porn stars penis!
Later we had this woman come over and interview in person. I asked her where she works now and her rambling answer was all like,

"I was working in a factory but the commute was too far so I asked my boss to lay me off. I've been collecting unemployment for almost 6 months and it's going to run out so I thought 'time to get a job'!"
Do you know when it was time to get a job? The moment you no longer had one. What, are we bringing "house wife" back as a career choice? I don't know if I was more surprised that she was not working for 6 months or that she didn't have a better answer.

Somehow in the conversation she managed to say, "I drive my fiance's Lexus" and "He just wants me to stay home so he can take care of me." Well, that's dumb.

And stop using the name brand of your car in conversation. It's "my car" or "my truck".

Another tip for some of you that is related. If you are talking about your mother it's "my mom etc...etc...." it's not  "mom is not doing well". It's not MY mom it's YOUR mom and "mom" isn't your mother's name.  Ok thank you. I waited a long time to say that.
Our final in-person interview was a man in his mid 60s. The moment I opened the door I wanted to close the door , "um, no."
He was wearing a bright gold and yellow shirt with matching tie and a blue suit with racing gloves. He also had some strange old fashion briefcase. This was the first man we interviewed for a nanny job. We are so progressive insurance. 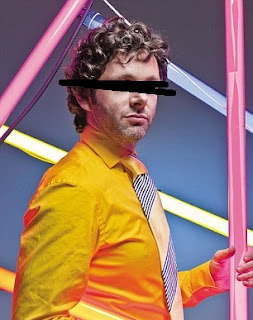 I don't have a photo but imagine he looked like this picture ,  but with a yellow tie and a blue suit and he was bald and a lot older with glasses and thinner.

This guy answered every question with a long drawn out explanation where he tried to anticipate all the follow up questions we would ask. He went on and on and on and on.
I was like ,"So what are you doing now?"
The short answer was he got into a car accident a year ago and he has been collecting disability ever since without a regular job. But he needs a "few extra bucks to get by" WAIT............WHAT?! You're disabled and you want to watch three children as your side gig?

If only he had died in that accident it would have saved me from this interview.
This is where the interview gets annoying because we know we don't want him but ending the interview this early would have been to uncomfortable. Sidebar, this happened years ago while a co-worker and I were interviewing someone. It was like 3 minutes into the interview and it was obvious this wasn't going to work. My co-worker stood up and said, "I'm sorry, this isn't going to work. Thank you for coming."
So back to the disabled man. He gave us his resume and he worked for some very wealthy families as the LIMO DRIVER. Anna is like, "You're a chauffeur?" He's like "yes but they would make me take their kid's places".

Opening the door for rich kids is not being a nanny!! A nanny is a babysitter that has no upward career mobility.
The entire thing was so absurd.
Finally, we did interview someone great and once we fire our current Nanny she will start.
I have to fire her in a few hours. Wish me luck!!!
Email Post