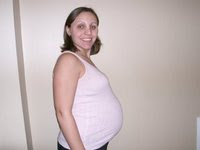 We’re 30 weeks!! Things are moving faster than something that moves fast.

In preparation for pumping out some babies we’ve been taking baby classes. We take a lot of classes….CPR class, breast feeding class, how to shake the baby class.

The other night Anna and I went to part one of a two part series about the trials and tribulations of multiple births. There were about 11 other couples and an enthusiastic instructor. We met some old couple, some non-descript couple and Jose and Salina. I looked over at Anna and said “hola” after Jose and Salina’s introduction. It was followed by me laughing at my own joke. The timing was just right, and I didn’t even prepare. Anna told me to shut up. I told Anna to shut up-o herself-o.

We learned so many things the internet would die if I listed them all so I’ll give you the top 3.

1) If you want to feel the tip of your spine, you’ll have to put some lubricant on your index finger, stick it in your rectum and keep pushing. When you no longer feel something soft you’ve found the bone. Hurray.

2) This guy across from us was squirming in his seat for awhile, and he finally got up the nerve to ask his question. “Would my dog get sick if he licked the fluid when the water breaks? He licks everything?”

3) When getting an epidural it is difficult to empty the bladder so most likely you’ll have to get a catheter put in. Seeing the look on some faces imagining the thought of getting a catheter, the instructor tried to be reassuring. She added, “They’ll attempt to empty your bladder without a catheter first by using some alternative methods like by putting your hand in warm water”. Ok, really? Hand in warm water? Um, probably not.
George
Email Post