We went with a couple film producer friends who make FILMS not MOVIES…as well as Xavier’s Godmother, who came into town to surprise Anna.

We got to the parade around noon. As usual, it was totally gay. There were already about a half million people lined up on the route so it was difficult to get a double stroller close to the action.

I swear, every year this parade gets more and more ridiculous. It’s like someone took a 10 block section of the city and told everyone, “Hey, this is the last time in your life you can act completely out of your mind so go ahead and do it now. “ That said, it’s the only half million person event I’ve ever gone to where everyone is happy and people say excuse me when they bump into you.

Eventually we had to split up. It was getting too difficult with the kids. I took Stella and Xavier on a walk around the block while Godmother Rachel and Anna headed into the crowd to dance with men in Speedos.

I did see an overweight guy in his late 60’s wearing a skirt but no makeup, no wig, no heels, no attitude. I was all like, “you’re not trying hard enough”…waving my index finger in his face.

After being there about an hour we took the kids home for naps. Godmother Rachel stayed though and somehow got “trapped” in the parade when she crossed the barrier. I’m pretty sure she was wasted. When I say wasted I mean drunk. When I say drunk I mean trashed….on drugs, i.e. speedballs.

We didn’t take any pictures because we were all wasted on gay drugs and gay sex and gay gayness. Didn't you know that's what happens? 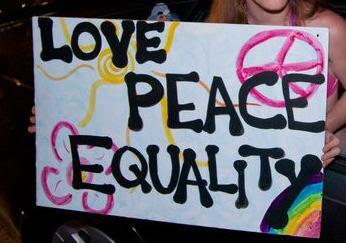