Hurray for airplanes that fly

We spent last week in New York and Rhode Island visiting the extended family on my mom’s side. Instead of driving a car 13 hours we took an airplane that flies but doesn’t shoot missiles. It was Stella and Xavier’s first time flying and they didn’t seem very impressed.

Mostly, they wanted to rip up magazines, throw food around and have a few tantrums. I’m pretty sure we won’t be flying with them for a few more years.

My hope was to use the flight to teach Stella how to reenact a scene from the movie Airplane. Specifically, the scene where the flight attendant asks a little girl if she would like cream or sugar in her coffee, and she responds, “I like it black, like I like my men.”

It didn’t go over well at all since Stella can’t talk and I was having trouble using her as a ventriloquist doll while performing the lines myself.

Once we landed in NYC, we met up with my parents, picked up the rental mini van and headed to Aunt Shorty’s and Uncle Husband-of-Aunt-Shorty’s home.

An hour later and right before pulling into the driveway, Stella impersonated a supermodel and puked all over herself. Let me tell you, this kid has a huge stomach.

Tons of thick chunky vomit just kept coming out of her mouth. Half digested cereal bars, crackers, bananas, cookies and rice cakes were mixed in with regurgitated milk and cheese. It was gross.

The mini-van smelled like barf for the whole week; sucks to be the next renter.

The relatives were so excited to meet the kids. There were gifts on top of gifts. I thought I was at a Daddy Warbucks’s Christmas party for orphans.

The house was wonderful and even came with food and beer. Who knew?

We spent many days swimming in the ocean, looking at big mansions in Newport and smoking pot. Stella and Xavier loved the ocean. It reminded me of my youth growing up on a Greek Island, which didn’t happen but could have if I was one generation younger.


On one of the days a “no swimming” warning was posted indicating high bacteria levels. I think it was the flesh-eating bacteria. My dad went in anyway and now he doesn’t have a penis.
…

Later in the week, while still in Rhode Island, Anna and I celebrated our 5 year wedding anniversary! Hurray for five years and two babies, it’s been wonderful. We had a night out alone in Newport and went to a sushi restaurant, which also had Korean food because Japan attacked Korea once and made them learn to cook Japanese food.

Sometimes when you’re in high school you’ll date a girl that wants to celebrate one month anniversaries so she can get in as many anniversaries as possible until you dump her for some other girl that just transferred from Catholic school who is easy. What can I say? That’s what happens.

On the way back from Newport we stopped in Connecticut to see my cousin Keebs(sp?) , Mr. Keebs and their two Keeblings. It was a relaxing pit stop until we almost died when a tornado ripped through the neighborhood. But, it soon flew away and we said our goodbyes and headed back to NY.
…..

Blah, blah, blah I need to wrap this bitch up….the flight back to Chicago was same as the flight out. Except, this time we gave Xavier Benadryl so he’d be docile. It kind of worked but the kids still managed to trash the airplane.

After a couple trashed airplanes, a trashed mini van and dozen ram shackled restaurants we made it home. It was really great seeing the whole family. 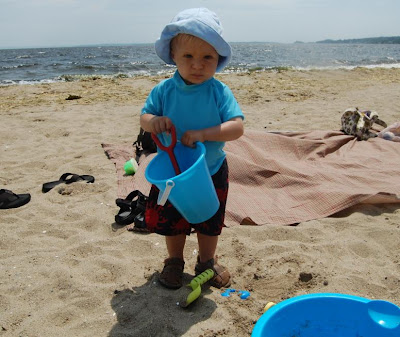 Xavier holding a bucket and a red plastic ho. He went everywhere with his ho. 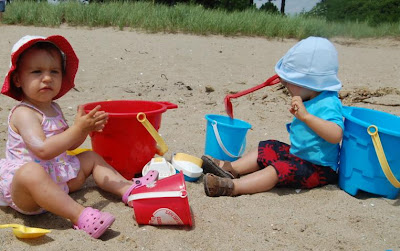 Babies at the beach. Notice the ho. 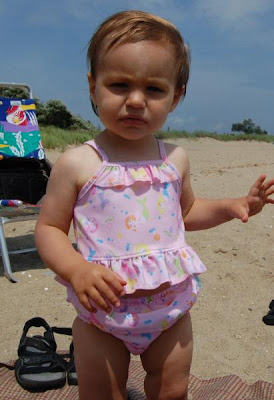 Stella had three swim suits for the trip. 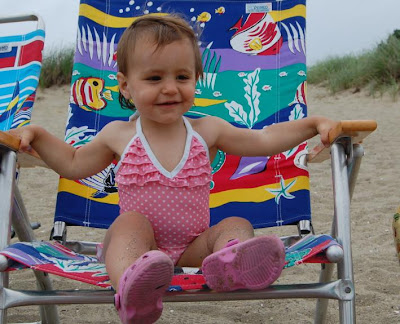 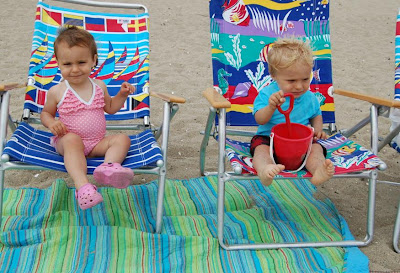 Here's a video from my iPhone of our plane ride back. Notice Xavier eating food off the floor and seat. Later he ate food from the toilet.