There are razor blades in my candy

My favorite religious holiday happened this past Saturday….HALLOWEEN! It’s the one holiday that hasn’t been taken over by marketing. Halloween has stuck to its core principles of worshiping the dead, decaying bodies and getting candy from strangers.

Before the Halloween celebrations kicked off, Anna and I took the kids to get vaccinated against the H1N1 virus, i.e., the swine flu. Our pediatrician ran out of the vaccine a week earlier so we went to one of the clinics setup in the city.

The doors opened at 9:00am and we got there at 8:00am. Everyone had to stand in line to get a number. This is probably how people bought bread in communist Poland. Once you got a number you were either guaranteed a vaccination or sent to a labor camp.

We left and went home for a few hours so the kids could run around and eat. When we returned, there was a long line; a very long line. If the line was a rope it would wrap around the earth 5 times and choke everyone.

Anna asked one of the helpers what number they were on. The guy was all like, “Did you leave? Did you leave? You need to get to the back of the line!” There was some exchange of words between this man and Anna that I tuned out but I’m sure it included one of them telling the other to talk to the hand.

Eventually a lady snuck up behind this man and whispered something in his ear while pointing at Anna. He looked back at Anna, looked down at her belly and was all, “Oh! You’re pregnant. Go right to the front”

We skipped the entire line and were vaccinated in 15 minutes. We never mentioned that Anna was already vaccinated until we got to the nurse.

Today we learned a valuable lesson. Pregnant women get whatever they want. It is the ultimate of all trump cards. 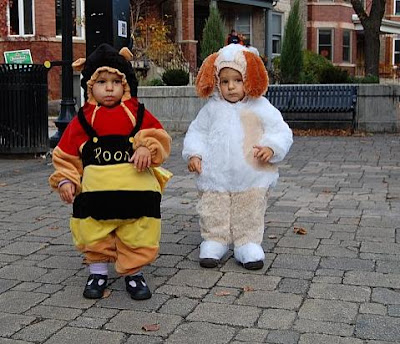 Stella is Pooh Bear dressed as a bumble bee (I don't understand that at all) and Xavier is a puppy. 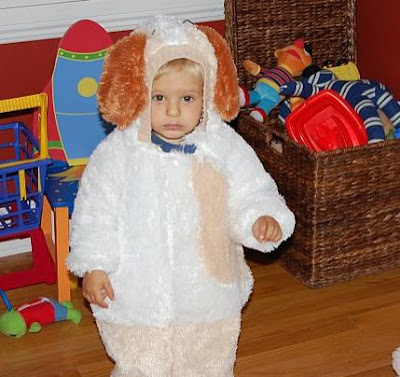 This is the most vicious puppy in the world. He bit me. 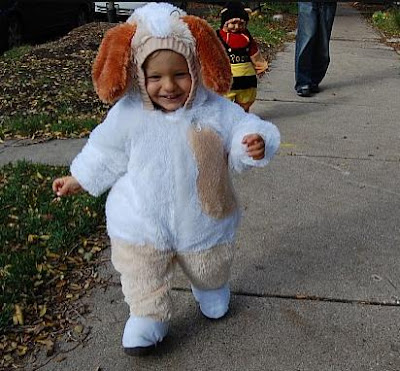 There should be a musical called "Puppies" and it will be a bunch of toddlers dressed in this costume running around on stage. There might be music but it won't be any good.

I'd like to point out, Stella's costume was a little big. 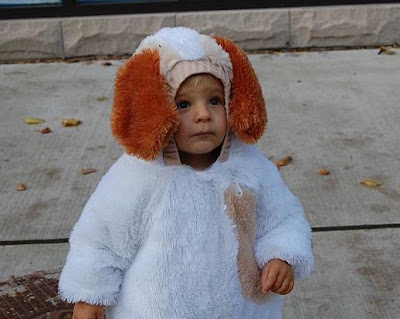 The ears are not functional. 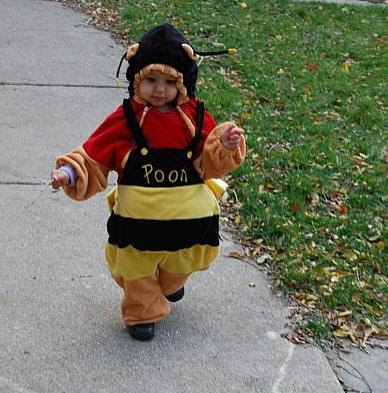 Stella stung her brother after this picture was taken. The costume came with a real bee stinger.

Kerry Lynn said…
I was thinking I would put a pillow in my shirt so I can enjoy the perks of being pregnant without the need to pee every 10 minutes.
November 2, 2009 at 10:12 PM