We moved and our nanny is younger and won't die soon.

A few weeks ago I mentioned that nanny #1 was going back to Poland so she could stand in bread lines. Well, she’s gone. We upgraded our nanny to a younger, thinner and smarter version. At first I was nervous. The kids were a little confused when this strange woman arrived one Monday morning instead of the usual old, falling-apart nanny.

After a few days they completely forgot about old nanny. This is good to know. If new nanny pisses me off, I can replace her without hurting the children. Nanny #2 speaks less English than Nanny #1. When I say “less” I mean she can say “hi” and “yes”.

Our old house has been sold and we moved into another overpriced Chicago house about a mile from our first house. It’s a lot bigger and closer to the lake. In reality (where I spend about 5% of my life) we lucked out big time. It’s a long drawn out story that I’ll repeat here and force you to read about.

If you’ve ever sold a house then you know it blows chunks; especially with kids. Each night we’d have about four showings. Usually we’d put the kids in pajamas, pick up a café latte at Starbucks, grab some sushi, and walk around the neighborhood pretending to be homeless. Homeless people should eat more sushi. It would help their skin.

Our first offer came from some first-time buyers using their roommate as their agent. I’m not sure if the two buyers’ and the agent ever had a three-way but I bet they did.

A few days after the contracts were signed, things started getting weird, like Michael Jackson’s face (may he rest in peace). They were slow to respond to requests, their agent didn’t seem knowledgeable and they were stupid idiots.

The final straw was the inspection. For the inspection, the buyer’s used an inspector known in the industry as “the deal killer”. The inspector did exactly that. He killed the deal. It was dead, like Michael Jackson (may he rest in peace). This inspector made everything sound like an emergency and the buyer’s got scared and dropped us.

With the deal dead and our house back on the market, the world started crashing in around us, like Michael Jackson’s life (may he rest in peace). Then, a miracle on 34th street happened and we got four offers within a few hours of each other!!! Two offers came in higher than the list price and we ended up selling the house to our next door neighbor’s sister. She’s Chinese.

We moved this past Friday and then my dad had a heart attack the next day. It was not very convenient at all. He’s fine now except for his heart. 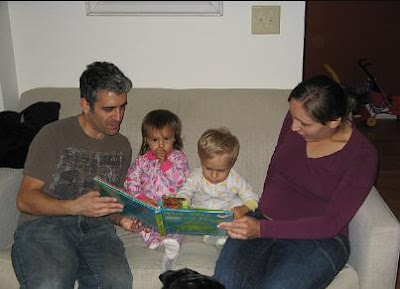 Here's the family reading one of our last bedtime stories at the old house. I've been dying my hair gray so I look more mature since I can't act more mature.

Kate said…
Congrats on a successful move! Did you know that Lili has a strange obsession with Michael Jackson (may he rest in peace)? We once listened to Jackson 5's "I Saw Mommy Kissing Santa Claus" at least 20 times in a row, until she finally cracked & couldn't take it anymore. That was fun.

I hope your dad's heart is doing okay. Now's an ideal time to try to veganize him! I will be veganizing my dad with a vegan Thanskgiving dinner next weekend.
November 21, 2009 at 4:30 PM

Michelle Cooper said…
Is your dad okay? Did he see the new nanny wearing something skimpy while she was reaching for a box on a high shelf? Or was he just thinking about that happening from Cleveland and it was too much? Glad the new digs are good thoug!
November 28, 2009 at 10:49 AM

Anonymous said…
I SOMEHOW FOUND YOUR BLOG........AND I HAVEN'T MISSED READING EVERY WORD. I DON'T KNOW WHY YOU DON'T WRITE BOOKS......OR MAYBE YOU DO....SOOOOO FUNNY.... MAKES ME LAUGH OUT LOUD. YOU DO THE WORLD QUITE A FAVOR, YOU AND YOUR BLOG. THANK YOU.
ARE YOU WONDERING HOW THE VEGAN TURKEY WENT OVER? IN MY HOME IT'D GO OVER THE BACK FENCE. JAN
November 29, 2009 at 8:59 AM

Kate said…
I agree with Jan. However, rather than doing the world a favor, I think that you & your blog are crapping on the world's face by only posting twice a month. What gives?
December 7, 2009 at 6:02 PM