Why don't hunters shoot Rudolf if he's so easy to see?

We’ve been in our new house for only a few weeks but we’ve already plowed through so many projects.

The basement floor has been ripped out and a new sewer pipe thing-a-ma-jig was installed along with new copper water lines and a drainage system. We did not find any bodies.

Somehow the plumber hooked up the new sewer line without telling us to stop flushing the toilets when the pipe was disconnected. I bet he caught all the poo in a bucket or his hands.

Anyhooooo, we’ve got to get this bitch done before the baby pops out of Anna in February. When relatives visit we don’t like them walking around the house dirtying things up or making it smell bad so we keep them in the basement. If you don’t like that you can complain to customer service at: 1-800-MY-BUTT-HOLE. Yes, I'm two years old.

I know turning a basement into a living space is so exciting so I’m going to tell you more. We’re adding another bathroom and a bedroom plus a play area. I don’t know what it is but I can’t stand having unusable areas of a house.

It’s like why would you live in a house for years and leave a complete section unusable? It reminds me of women that wear boxer shorts with the fly flap opening before having a sex change operation to attach a penis. It makes no sense, no sense at all. I should sue those people.

Ok, I need to go because we are hosting Christmas for the first time in the universe and I need to get the house ready. Let me explain for people that are new. Christmas is the celebration of the birth of Santa Clause. It is celebrated by buying things for people that they will return to the store using a gift receipt.

Santa will not bring poor kids anything because he hates orphans but one orphan girl will try to sell matches to make money for toys but instead, she uses them all up trying to stay warm. She meets a little drummer boy and gets pregnant with Jesus. They were only hugging. 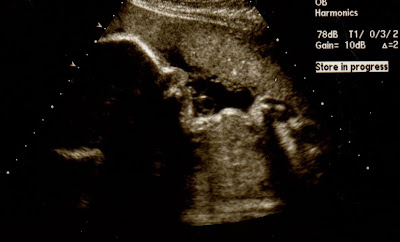 Here is a picture of baby number three. This picture is from inside the uterus. Early on, babies are black and white. They get color after they are born.
Xmas 09

Kelly Hutcheson said…
stop blogging and start working on the basement would ya?

and please don't post without pictures of S & X? that's offensive to your readers. almost as offensive as talking about poo in your post. You only posted your 3rd child - are you showing favorites already? sheez! (throwing hands in the air)