March 07, 2011
Our littlest Fiona Marie celebrated her first birthday two Saturdays ago. She turned one. When the twins turned one and we thought we’d only have two kids there was a giant party. Oh poor Fifi, only Anna’s mom and Grandmother came into town and the birthday girl was so tired she slept through lunch. We woke her up for cake. Can you imagine being the sixth or seventh kid in a family? Mom would be all like, “Does anyone remember when that baby over there in the corner was born?” 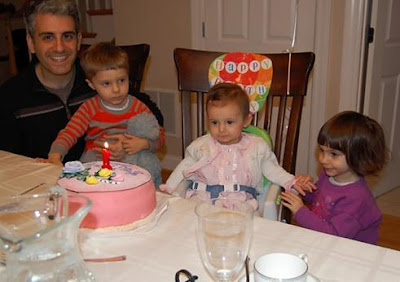 The Nanny also came over with her mother who was visiting from Poland. They came as guests so I didn’t make them clean anything except the bathrooms. Is the mother of our Nanny also our Nanny? How does that work exactly? 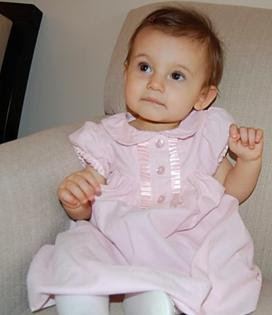 The next day we left the birthday girl with Anna’s mom and flew to Florida with the twins to meet my parents for vacation; hence the reason my parents didn’t come into town.

We did something for this vacation that Anna and I swore we would never do again since the time Anna was just out of college, and that was go on a Carnival Cruise. After reviewing the cost of flying and feeding four on a five day trip as well as coordinating schedules this ended up being the best option.

So, two Sundays ago we got the kids up at 5:00am to make a 7:30am flight. I feared the worst with these two being up that early but low and behold the moment I opened the door they were like “we going on cruise” and ran right out of the room. Everything else since then went so smoothly.

The only issue we had was when Xavier’s teddy bear went through the scanning machine at the airport. He never let’s that thing go and I had to rip it away from him and boy was there a tantrum until that bear came out the other side.

We met my parents on the boat Sunday evening and set off for the Bahamas. Anna and I thought we’d end up leaving the kids in a 2-3 year old program for at least one afternoon to do stuff on our own but that never happened. They were behaving so well we didn’t feel the need to get rid of them.

Also my mother spoiled them. Each time they saw their Yiayia’ she had more stuff from the gift store. This is how I remember my childhood minus the gifts and the fun times.

The twins were very popular with the service staff. I have this concern they are starting to realize how cute they are and are using it to get away with murder; literally. They might have murdered someone this week. I think it was the mail man.

Stella is specifically singled out by strangers who say things like, “you are so pretty”, “you’re a little princess”. I HATE that. Princesses want to be saved and grow up to be spoiled bitches. Stella is no princess. I call her my little Midget Japanese Quantum Physicist to balance things out.

Here are a few highlights.

The room had a “king bed” (it was two twin beds pushed together), a cot and a bed that flipped down from the wall. The kids slept in the king bed with Anna in the middle and I slept on the cot. We decided not to use the pull-down bed on the wall as it would give the kids another thing to jump off of.

There was no room left for me so I had the cot. But, whenever I got into the king bed to watch TV with the kids they would yell “No, dada! Little bed” and pointed to my little bed on the floor. I have never felt more loved then at that moment.

On the cruise we saw two live singing/dancing shows. Stella was fascinated with both of them. She perched herself on the edge of her seat and mimicked all the dance moves When a song ended she clapped with such enthusiasm you’d have thought Jesus just started letting Jews into heaven. 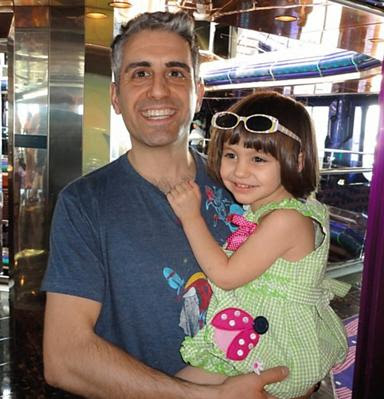 Stella got ice cream on this dress and insisted on wearing it the following day with a big chocolate stain on front. That's the way we roll in this family.

Moments after this picture was taken we were at the beach for our first day. I forgot to have someone put sunscreen on my back after I had already put on as much as I could. Before I knew it, my back was burned into a ridiculous pattern with hand prints around my shoulders and lower back. I spent the rest of the week walking into the ocean backwards so no one would see. 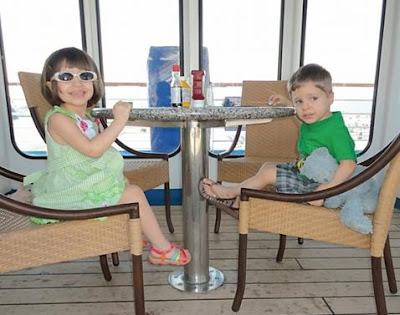 The kids learned about french fries at the pool side deck and asked for them at every meal. 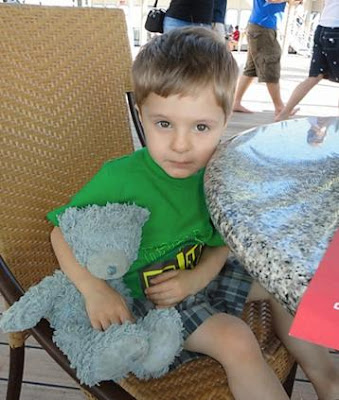 Notice the bear in every single picture. 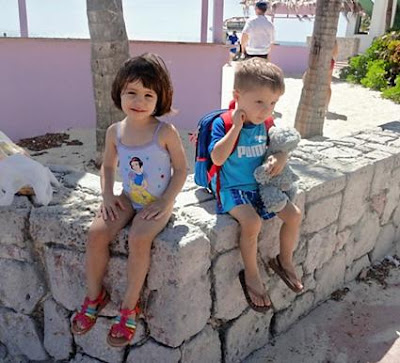 Waiting at the beach. 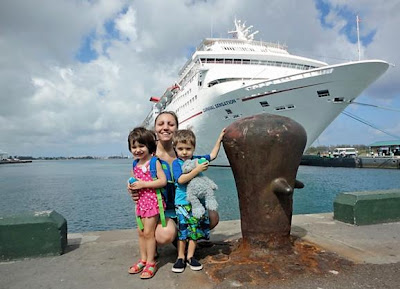 The whole family is as tall as that metal thing. 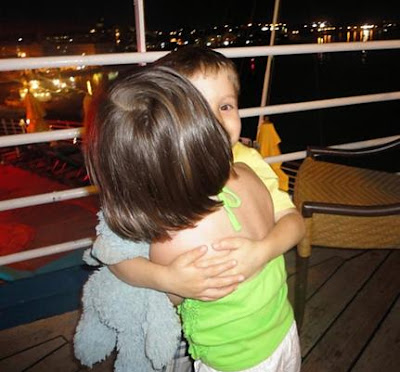 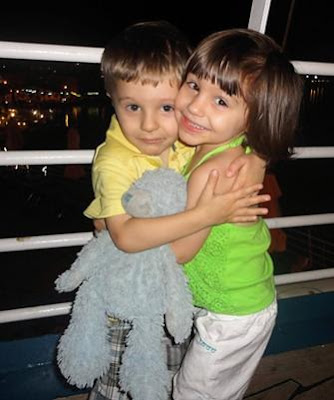 HUGS! That bear smells so bad. We really need to wash it. 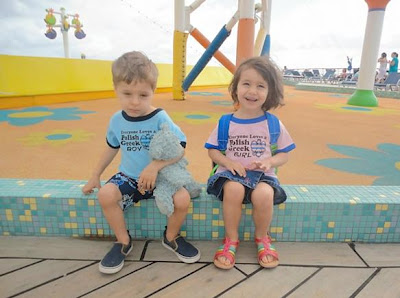 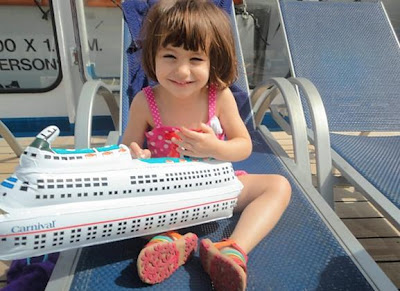 My mom bought the kids these inflatable boats in the gift shop on the cruise. While in line at the store she told the kids that once we left the store she would "Blow up the boat". The entire store got quiet. My mom tried to cover and point to the inflatable boats and kept saying, "I'm going to blow up this boat. Not like that kind of blow up. I'm going to blow up this boat." She really should have stopped talking. 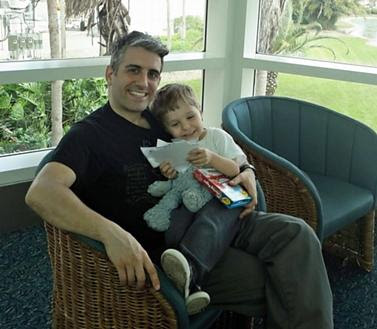 This is during the 4 hour wait at the airport coming home.

On the way home Xavier had finally had enough and threw a major tantrum when the plane landed. I had to carry him over my shoulder literally kicking and screaming the entire way from the plane to the taxi. He finally stopped screaming when we got in the Taxi.
Fifi Birthday