When the twins were babies we bought every battery powered plastic thingy just to get them to sleep at night or stop crying or get on a TV show that paid tons of money. The baby industry convinces parents that a vibrating swing will stop your baby’s colic. There's NO SUCH THING AS COLIC. It's a baby. It cries...you idiots. Save your money and hire a day laborer from Home Depot to get up during the night. It’s a lot cheaper.

Boy, have times changed and Molly Ringwald still doesn’t have an acting career.

Now, we spend bundles of money on new ways to keep the kids from beating the crap out of each other. 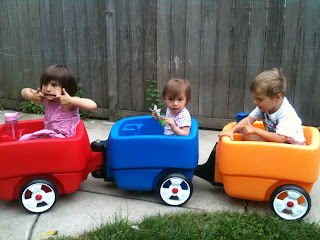 We got a three-kid Choo Choo Wagon.  I thought I would be the hottest piece of ass in the neighborhood pulling around this gem. A slim,  hairy man...veins popping, a slight sheen on my forehead, maybe I’m shirtless…maybe short-shorts with a rip at the sides.

That didn’t happen at all.

Some woman yelled, “you should have a forth” out her car window and some guy laughed at me. Anna got a Facebook post from her friend, “just saw your husband go by….” Whatever you people… I know I’m awesome. Go suck it. 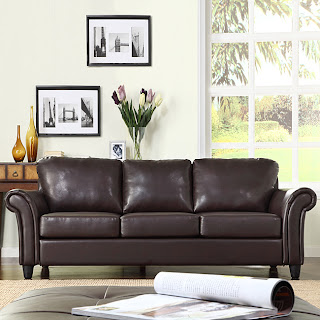 We got this faux-leather sofa. First, it’s faux leather because I respect non-violence and think people that use animals for clothe or furniture should be f-ing MURDERED!!!

Our old sofa had been puked on, poo-ed on and peed on…etc . It’s for sale for $75 if anyone wants it. Shown above is a picture from the catalog. Our house doesn't look so nice and I don't want you to see it.

We had a love seat before and it was so small that when the kids sat together their legs touched. God forbid. And when that happened, they pulled off their fake finger nails and threw down. Hair weaves were flying. Which meant I had to get up from playing on my computer and see what was happening and that pisses me off.

BTW, none of these items have kept the kids from fighting...the twins specifically. They can reach each other from from their wagon compartments if they are sitting in sequence. Who makes this stuff?

Listen now company that makes kid's crap. If you are making a wagon I want walls that I can raise and lower between the seats so my kids can't hit each other. Same goes for side-by-side strollers. Also, you need to have a fake stirring wheel in the last wagon caboose so one kid gets to be FIRST and the other kid gets a steering wheel. This will mitigate the fighting over who goes in the first wagon.