Three kids and a wedding.

My sister got married this past weekend to a man.

Everything went very well. I thought for sure my mom would crack under the pressure and shove gerbils up her butt. That didn’t happen at all this time, publicly, in the United States.

One of our biggest concerns was getting three kids to not have a royal flip-out during their duties as two flowers girls and a ring boy. Any parent can tell you dressing up kids in fancy clothes and getting them to do things on cue is a bit like trying to get a cheerleader to count how many football players she slept with; it’s just about impossible. Yeh, go team…I had five abortions before finishing high school.

In the end, everything went swimmingly.
They walked all the way down the aisle in an almost straight line. No one cried. No one punched a sibling No one threw up pea soup. 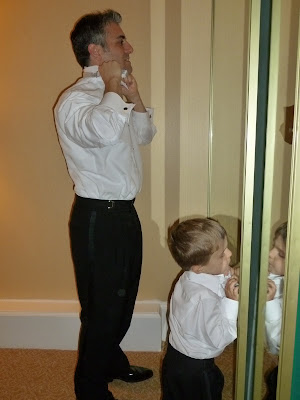 When the ceremony ended, we had pictures taken at the church by a bald photographer who used every combination of relatives you could possible think of. 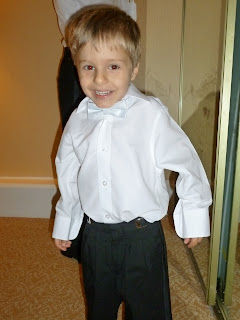 Fast forward to the reception…zzzzzoom. My mom got a babysitter to watch the kids in the hotel room so that Anna and I could enjoy the night unfettered. I’m not sure who the babysitter was actually but the kids liked her and that’s good enough. She was a little chubby but tries to watch her diet.

With the kids gone, the machine hit the dance floor. I am the machine and I was at full power.

Everyone dancing that night was really good, kind of not really. Nothing weird or inappropriate happened if you have low standards.


On the way back to Chicago we had a minor incident with this guy driving the rental car shuttle from the rental car place back to the airport. So here’s what went downtown Julie Brown.

So this guy is taking us back to the airport from the rental car place with a bunch of other people. We tell him we’re on Southwest airlines and he says to me, “That is the first stop”. Ok, got it. Then another couple gets on the shuttle and they are Continental. Continental comes before Southwest in the terminal.

We make the first stop and the driver yells out “Continental”, so we figure this isn’t our stop. The Continental people get off and he continues on. He drives past Southwest. I stand up, “Sir, we’re Southwest”. He gets totally PISSED. “I told you Southwest was the first stop. I told you. You didn’t get off” We only make two stops!!!”

Um, ok. I’m thinking. You yelled out Continental but not Southwest. It was a little confusing. We’re running a little late, so when he finally does stop, I grab one kid and start unloading bags while Anna grabs the other two kids. I’m annoyed with him but thought this whole issue was over.

The driver gets out of his seat and starts up with us. “You’re mad at me. I told you where your stop was. You shouldn’t be mad at me”. This went on and on and on all the while he is standing in the way. I finally get annoyed enough to tell him, “Shut up already”

Can you believe that people? CAN YOU BELIEVE THAT?

He didn’t exactly threaten to slit our throats but I could almost tell he was thinking it.

Then this random lady, who was probably attractive 15 years ago, saw this crazy business happening and is all like, “Let’s get out of here!” and grabs our bags while we grab the kids and we all push past him. I tried to rub my entire body up against his to see if I could absorb some of his testosterone into my super powers that I want.

When we got home I called the transport company and they knew exactly who this guy Tony was. I asked if they could put me on speaker phone when they fired him. They said, “No” but would consider bitch slapping him. 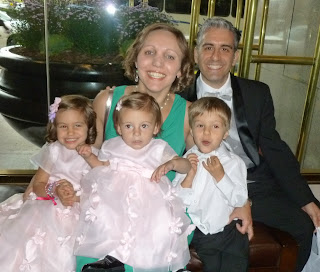 We don't have any of the official pictures yet, but here are some my sister in-law and I took. 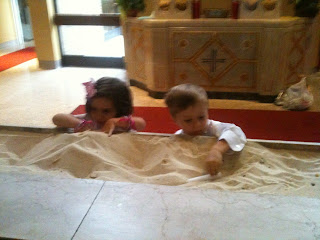 I haven't been in this church for maybe twenty five years.. When they found out I married in a Catholic church instead of a Greek church I was excommunicated; so I let my kids play in their holy sand where the candles go.
Email Post
Labels: wedding

Anonymous said…
Could your family be any more gorgeous? I feel like one of you has to write a tell-all autobiography some day because the picture of you & Xavier has to go in the photo section in the middle of the book. It's awesome. And the pic of you & glamorous Anna & your ridiculously good-looking children. Can your believe your sperm begat such beauty??