If a man in South Carolina can kill two  people , burn their bodies and then bury them in his backyard all the while being found not guilty by invoking stand your ground ...then I can smack people around that act like morons.
(click... man-claims-self-defense)

There is nothing interesting about the following story.
Over a year ago we paid a family to remodel our basement. They had a company LLC but it was basically dad, grandpa, son and other son and random friend with an over bite.

During that process, we corrected the dryer from venting into the garage to venting outside. This resulted in the post  The dryer vent war which I have referenced many times.
When our basement was being remodeled, the dryer was moved from one side of the basement to the other. The guys doing the work mentioned that they would vent the dryer into the chimney. The same chimney that the furnace uses! WHAAAAAAAAAAATTTTTTTTTTT,   WHAT IN THE BUTT?    (click the butt link)

That was the first sign that, although their general carpentry work was great, they didn't understand a lot about air, HVAC, electricity, water, man-on-man-on-man-on-man eroticism etc.. The dryer makes lint. The air is heavy with moisture. That lint would build up in the chimney and could start a fire. Not a camp fire, a real fire.

The lint would not be able to blow out the top.

You can vent a dryer out the roof but you can't make it drink like that horse. You need to use a booster fan and you can't ever just vent it into the chimney.   WTF was wrong with these people besides mismatching outfits?
Anyhoooooooooooo, when they were doing the duct work for the dryer vent, I told them a million times , "Do not seal up the wall until I see what you did, whores." Of course, I came home from work and it was all sealed up. They described what they did and I decided not to make them open up the wall even though I should have.
A year later (last week) the dryer was not drying well and the auto sensor kept turning the machine off. I figured the dryer vent was clogged like people that die of heart attacks.

I pulled out the machine and saw that they had used duct tape (not aluminum tape for high heat) and taped the dryer "slinky" flex tube directly into the back of the dryer.

Then, they crammed the flex tube up and into the wall all the way to the outside. It was crushed into the wall. There was hardly any room for air. We need air to breathe. Fish breathe water. 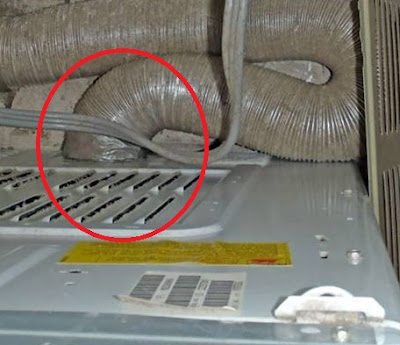 The tube got so hot it was falling apart and the wall was filled with lint.

I called my new "go-to-guy" to ask him his thoughts and to fix this..

We decided to use all rigid venting with rigid flex tube and try to make the best of it like having sex on prom night. We left enough access so I could pull off the tubes and clean out the lint. 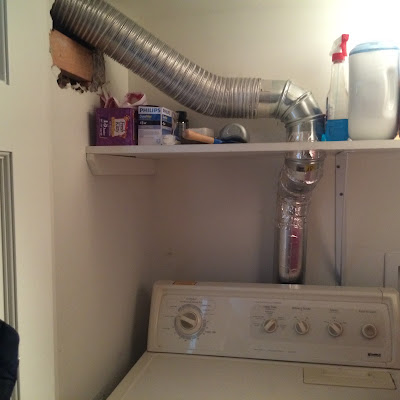 Yeah, now we have a nice, hard shaft. OMG, I love long hard shafts. They are so amazing. Yummers.

I left this hole in the wall because I didn't have a brick. It's just one more brick in the wall. Why did that guy shave off his eyebrows anyway? Why does Wendy Williams still have a TV show? 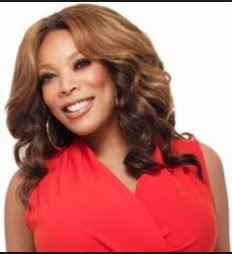