A few weeks back, during a windy day, I found a piece of unframed art blown up against the front of our house. It was a chalk  and paint project and I thought it looked kind of cool, so I rolled it up and put it inside. 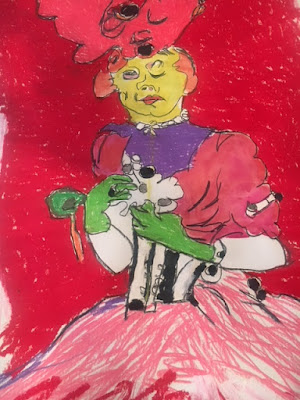 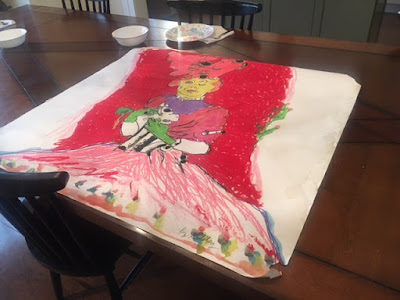 This gives you a better idea of the size.

I decided to look at it closer and realized the artist 'Liz Goldberg" wrote her name in pencil at the bottum.  Why pencil? I don't know.

Then I found the exact picture! It's called "Lady Dona" and it was created in 2009. It had a frame at one time. How exciting! I was being chosen to fulfill some destiny's child!!!!

I decided to send her this email:


Hi ,
I live in Astoria , NY and one windy day about two week ago I found one of your paintings blown up against my house .
I searched your name and saw this picture on your website . See the attachment .
Did someone lose it ? :-)


Hi ,
Yes its mine. trying to figure out how it ended up in Astoria?
Was it damaged? We will talk further.

Well, her response was very underwhelming. This is a giant mystery and she doesn't care that I was chosen by the art.

Her response doesn't make sense either. The computer in me is saying that something is off. "We will talk further?" I mean, did she sell it or not? Did she notice it was missing? Doesn't it seem odd it was on the front of my house?

No it is not damaged. The bottom edge is a little roughed up but otherwise it is fine.
Was it stolen or purchased by someone?
Maybe you know someone around that area .

Argh, it was "purchased" um, "perhaps stolen". Vague talkers. They are really in the top 10 for people that should have been abortioned....one slot behind people that describe everything as "nice".   Is she trying to sound mysterious?  What does any of this have to do with her travel schedule? I may just keep the painting because I hate the way she writes emails. Yes, I have issues.

Oh no. just guard her. out of town tomorrow, but we can figure out something on Thursday.

I did not respond to that last email. It just made me hate her like i hate Nazis.

The art chose me for a reason and she won't take two seconds away from finger painting to help. I hope karma doesn't Jackson Pollock her. (Jackson Pollock got drunk and drove his car into a tree. Then he died. The tree lived. I'm the tree in this story).

Yeah, I'll guard her alright,,..some war lord is stealing all her paintings across nyc to put them together to create a super painting that will one day rule stuff.


She just sent this email: WHAT! I need MORE DETAILS.
How can she hot potato drop me like this?
This story isn't over.