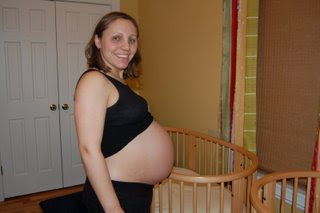 Here is a picture of Anna at 36 weeks! F-A-B-U-LOUS-AWE-SOME.
I can’t believe we have gone this long.

We just had our 37 week ultrasound and it’s a crap shoot when these kids are going to come out. Since they don’t like to let twins go many days past 38 weeks, we have an induction suction scheduled for next Wednesday. Ok, it’s not really called that but I like words that rhyme…don’t you?

What’s going to happen is, on Wednesday night a catheter will be inserted to open Anna’s cervix. If labor has not started by Thursday morning, drugs will be pumped in to start contractions. Soon after, the babies will fall out…just. like. that.
Email Post