For only one dollar a month, you can feed a whole family of skinny people.

Nanny left a message Saturday wanting to renegotiate the terms of her employment. When we hired her we said we could talk about salary at three months. We were hoping she might be too busy taking care of our kids to count to three.

Anna called Nanny back and offered her a raise but she didn't seem too keen on the amount.

So, on Monday morning I had a stack of one dollar bills ready. I took a dollar in my hands, crumbled it up and tossed it unto the floor in front of her screaming, "is that enough?", “is that enough?”

I boiled over like a tea pot and threw the rest of the money down, “There, take it all and let our children starve like Ethiopians. Let me call Sally Struthers right now and tell her there’s two more children that have to live on a penny a day.”

I totally came up with this technique on my own; not even the internet thought about it.

Either way, Nanny is fine. She just thought the work day was a little too long. I explained that Donald Trump has a long work day too and he has millions of dollars.

Nanny did voice her concern that she might die before June. Apparently all of her friends back in Poland are dieing. Hmm..., ok.

If she does die I’m going to ask her to try and make it happen off hours and to give us some kind of warning what day it will be.

I was thinking I might pre-program a message into her cell phone that's like "I'm dieing right now. You need to find a replacement. Call ambulance if you have time….you can have all my money ". She'll just have to press "send" when she's ready. 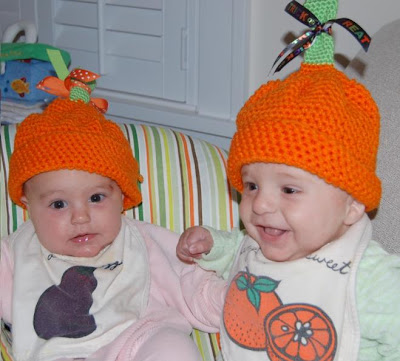 The next door neighbors gave us pumpkin hats for the kids. 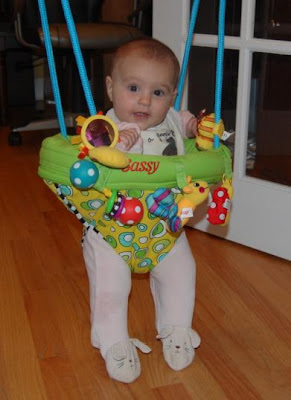 This is a bouncing swing. We put Stella in it and shoot her around the room like it's a sling shot. 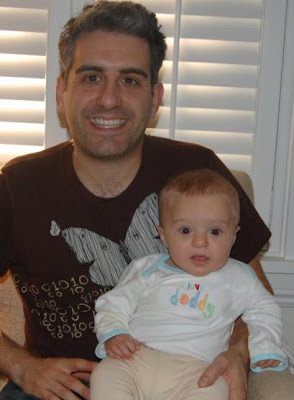 Dad and Xavier. So cute and Xavier looks cute too even if he doesn't have dark hair.

Scarlet O'Kara said…
Well, this was the "giggle" that I needed today! Thanks for making it possible.

And I just love those hats! Kiss and hug those beautiful babies...'cause they are getting bigger and more precious by the minute.
October 7, 2008 at 12:31 PM