Today, we are all Pilgrams and not Native Americans 'cause they lost.

We celebrated Thanksgiving Day this past Thursday. The holiday originally had to do with the harvest and then pilgrims and then murdering Native Americans for land. Now it’s about getting wasted. Just like Christmas and Hanukah

As is tradition, Anna and I headed to Ohio. The same state that turned blue in the last election. We couldn’t drive five minutes without seeing someone having gay sex or burning bibles or trying to get affordable healthcare.

It took about four hours to get to my in-laws and the kids were really tired from the drive.

Aunt Duda and Anna’s parents were there. Everyone had lunch; it was good, blah… blah… blah, no drama, which makes for a boring post. I’m bored writing this. Each kid passed a big loose poo and we left.

After leaving my in-laws we headed two more hours to my parents place for Thanksgiving dinner. Stella and Xavier got passed around the room. Someone tried to take a hit off Stella’s head until they realized we weren’t passing joints. Its Thanksgiving people not Christmas!

Well, everyone was so happy to see the first kids of the next generation on this side of the family. It’s especially exciting for Anna and me because we still sit at the kid table at my parent’s house.

We headed back to Chicago Saturday morning making one more stop at my in-laws. This time the grandmothers were there because they’re only allowed out on Saturdays.

I’ve got to say, the trip was exhausting. Packing up two kids and all their stuff and breaking their routine is difficult.

Stella and Xavier were so worked-up after we got home they cried for a while before I fed them sleeping pills. 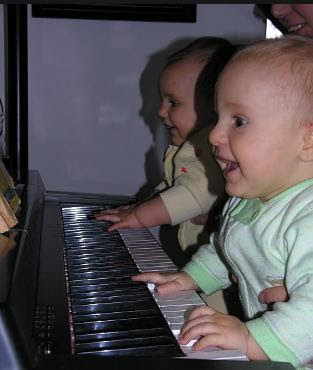 Stella and Xavier playing piano. They're playing the Russian Sailor's Dance. I thought it was a little too harsh for the holidays but the kids pulled it off. 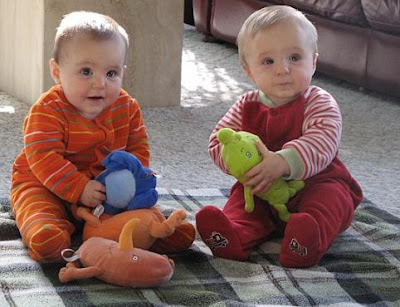 My father in-law gave the kids organ stuffed toys. The thing on the ground is a kidney. I think Xavier is holding a pancreas. The stomach is in Stella's lap. There's also a liver. Don't worry, there isn't a stuffed penis. 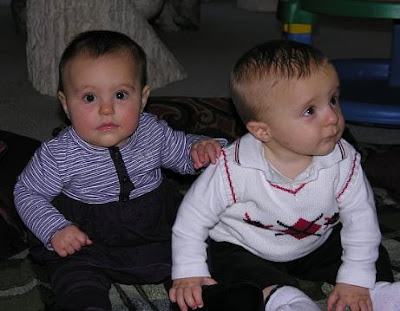 All dressed up in Thanksgiving Day outfits.
Email Post

Anonymous said…
Sorry we missed you guys. We couldn't sort out the childcare situation and leaving the kids alone overnight with their northernmost grandmother was not a viable option. Maybe we can come up and visit some weekend...with or without our kids. We need to see those babies up close.
December 1, 2008 at 7:21 PM

Anonymous said…
"Someone tried to take a hit off Stella’s head until they realized we weren’t passing joints."