Six diseases that the flu shot won't do anything about because the government is stupid.

And yes, they got the flu shot. Apparently the flu shot only works against the flu which is the stupidest thing I’ve ever heard.

The symptoms start with a cranky baby, then a fever, and then a rash that covers their entire little body. Kinda like that rash everyone gets in college from having too many sexual partners in one night. Five is too many.

Stella and Xavier have been up at all hours of the night for a week now because of this virus.

Why can’t you give babies alcohol to sleep? That wasn’t a rhetorical question. Contact me if you know why because I’m about to give each of them a shot of apple pucker in their next bottle.

Yes, I said apple pucker. It’s cheap and they can’t appreciate the good stuff yet. The only time I ever drank pucker is when my friend got married and all the bridesmaids drank it. The one bridesmaid is now a stripper and the other one I won’t say because it is too personal but she is a homeless meth addict.

See what this has come to?
These viral infested babies need to start sleeping people. 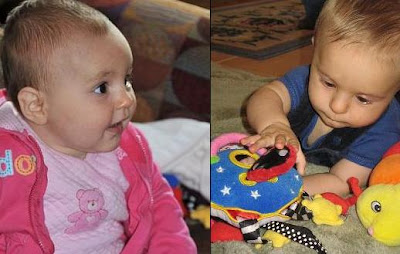 Anonymous said…
Okay George I have read this blog while my beautiful baby girl is taking her much needed nap! Nice to read that you are still funny as hell..I literally was laughing out loud. Your family is gorgeous! You are kinda sporting the George Clooney look with the graying hair...NICE!!! You guys are truly blessed..looking forward to reading some more crazy posts. Is that Rod WIGGINS as the Rodfather? What a blast from the past!!!! Shannon Malone
November 15, 2008 at 1:57 PM

Anonymous said…
Were they sick when I was there? Is it contagious? I don't want any baby STDs... I have enough problems with my love life as it is without having to have that conversation with someone. And my mom used to give us vodka/rhubarb slushies... and look at how well I turned out :)
November 18, 2008 at 11:40 AM