The boy baby is keeping us up at night. He is going through a crazy period of shaking his crib and screaming at all hours. We think he may be coming off heroin.

The book says this is not teething. Teething at night apparently is a popular myth and everyone that thinks its teething is a stupid loser.

Anna said we need to get this because another multiplies family from here uses it. Ok, I trust them but this is creepy.

I like the idea. In a few years when they start talking back I’m going to use it to slap them across the face. They’ll hate the hand but not the hitter. I wonder if the hand is related to the Hamburger Helper hand. …better Google that later. I bet they’re siblings.

In other news, we transformed our basement into a human zoo. Not the kind of zoo which tries to mimic nature but the old kind with fences and concrete where the animals stop mating and eventually die. Anyhow, we put the kids in there.

We used a hodgepodge of adjustable gates to mark off an area of the basement. Then we sold two sofas and used the proceeds to buy a flat panel TV to put on the wall and removed the TV that was on the floor. Now we can let them party like rock stars while we go out line dancing to Personal Jesus.

We are such smart parents. I just winked at myself. You are so awesome. No you are. Oh hush, you are. Stop it, you are more. No you are. God I’m tired. 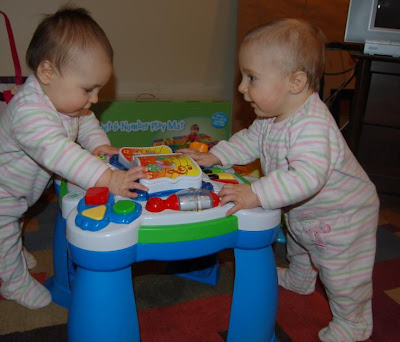 Here they are in matching pink stripped sleepers. Evil baby is on the right. Look at him!! ...acting like nothing's wrong.
Email Post

Anonymous said…
There's nothing worse than a baby coming off heroin.
I'm sure the boys shaking crib thing is just a phase. And once the boy stops the girl will start. Trust me.
February 24, 2009 at 9:14 PM

Erin said…
That is one of the funniest things I've read in a long time. I have many similar pictures of my two evil babies having a (pa)jam(a) session, but I we trend more toward blue sleepers, I think we need more pink!

An Urban Story said…
Ha ha, I just embeded my links sissy girl. I was being lazy.

Carey said…
LOL The Hand is super creepy!! But the damn thing works!! We used it last night on one of our boys who cried out every time I moved my hand from his back... I just put The Hand on him and he was happy - and more importantly - he did not wake back up!
February 25, 2009 at 11:21 AM