I shot the Sheriff, but he didn’t own a restaurant

February 03, 2009
It’s been a long time since my last posting like the long time spent in Vietnam.

So we were in Jamaica for a week getting a much-needed vacation. The kids stayed home with the nanny and partially the mother in-law because they don’t have passports. We also thought we could use an adult vacation.

Just like chocolate without the sugar, Jamaica was bittersweet. Not having the kids around was kind of sad in a ‘wish they were here’ sort of way not an 'I have cancer' sort of way. This is our second time to Jamaica, and we plan to go every year but next time with the kids.

On our first full day, we made it to the beach by 9:00am and were drunk by 9:10am. The maintenance people were selling pot to everyone and their stoned mother. Even the security guard was getting baked. I tried to buy Quaaludes but they just looked at me weird…because of how good looking I am and hairy.

The food was great, by the way, but their interpretations of some ethnic foods were royally off mark. We ordered miso soup from the asian restaurant and were served mushroom soup. It was good but me want my miso, people. The vegetable tempura was strange. I almost kamikazied myself.

Jamaica is funny. It’s so poor and filled with murders yet there are these huge resorts with so many French, British and Germans trying to get down with the Reggae. The Jamaicans really push the Bob Marley image because it’s what people expect; shooting sheriffs and whatnot.

Every night at 9:00pm we were greeted with entertainment on the main stage that was one level above a high school talent show.

On the third night of the show, we were serenaded by a Michael Jackson impersonator who had all his clothes ripped off during his routine. Then, there was a Whitney Houston impersonator doing the Body Guard song and the body guard was beat up by a bunch of people then “peed” on by a man in a dog costume. I did not understand that at all. Why didn’t the dog pee on Whitney Houston?

It took me about half way through the second night to realize all the dancers/entertainers were the workers from around the swimming pool and tennis courts.

Honesty, I think someone in the hotel's management group was like, “hmmm, we don’t have any entertainment or money in the budget. Let’s round up some of those bitches from the pool and have them come up with something crazy.” 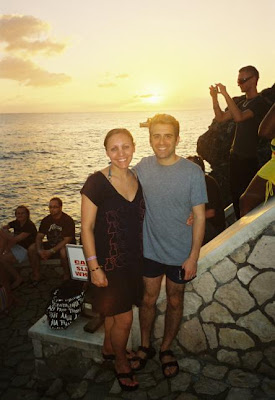 Look at my legs. Nice. 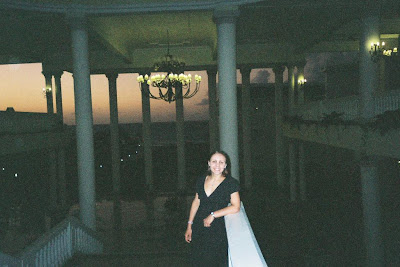 We forgot the camera and bought this digital disposable camera. It doesn't work well in low light but Anna still came out looking sweet. Yummers. This is the lobby. 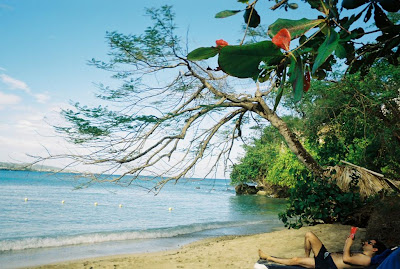 The beach and some hairy guy which is me reading a trashy novel about this serial killer that butchers people in Napa Valley. 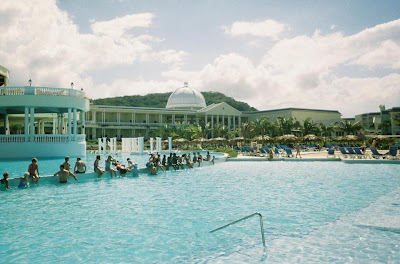 This is the pool at the hotel. Those people on the wall are doing water aeorobics. Anna didn't want to join in and I didn't feel like going by myself. 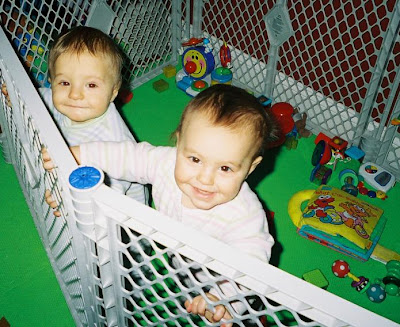 Xavier and Stella are 10 months old!! Still cute. They both can stand and "cruise". Stella finally has teeth. They live in this play area. We never let them out.

Anonymous said…
a) Hubba hubba on that picture of Anna!!!!!

b) I'm ready for the Valentine's pictures!