Not much went down. We survived our first full year as parents, we had sex without protection, Anna got pregnant, we realized our house was too small to fit three kids; we sold our house and bought a bigger house. Currently we are renovating the basement and getting stuff ready for baby number three. I just finished putting the crib together.

A steady stream of money has been exiting our bank accounts like urine coming out of a urethra. Kids cost so much money. I have no idea what people did before money was invented.

The new baby is transverse and will most likely be cut out on Feb 26th. When Xavier was transverse (and before we knew him) I illustrated the situation to you awesome readers. So, I’ll do the same for new baby. 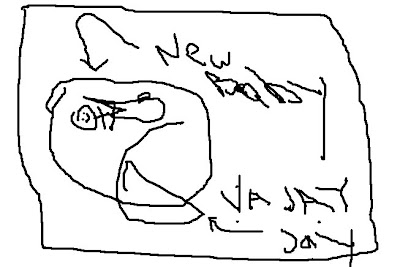 This is what a transverse baby looks like. As you can see, the baby is perpendicular to the vagina. The baby is inside the uterus. Sometimes when a baby grows outside the uterus it is called a chicken. 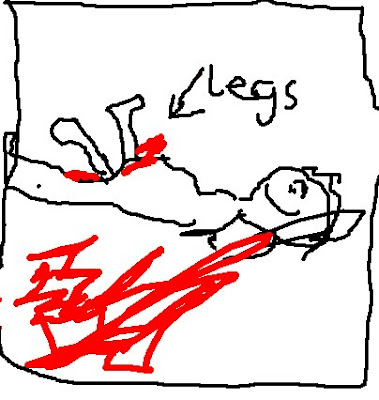 This is what will happen during a c-section. Xavier came out just like this, legs first!! He was deducted one point from this rating thingy they give babies being born because he didn't cry immediately. I think he was in shock from being pulled out legs first.
Email Post

Kelly Hutcheson said…
Thank Goodness for Anna because your children will turn out normal. I'm a counselor and from your words and drawings, I think you need psych help. teehee :)
January 19, 2010 at 10:08 AM

anna said…
Dude, surprise baby is BREACH! I hate to tell you now that you've spent all this time on that silly picture. Poor confused daddy.
January 19, 2010 at 11:04 PM