Our kids honored their mother Sunday by getting up at 5:50am. Anna was already up at 4:00am to get some work done and I’m sad to say I didn’t hear them and slept in until about 6:30am.

Let’s back up the car and run over an old person for a second. Yes, I said Anna got up at 4:00am. Her work schedule is so demanding she gets up everyday at 4:00am to finish typing up patient notes. She is such a hard working, unlike that mom in the movie Precious.

The thing that sucks donkey balls is the kids are waking up earlier and earlier. They used to sleep until about 7:00am but with the sun rising at the butt crack of dawn they’re like roosters getting up at 6:15 in the morning.

With the kids up early we all headed to the zoo. Chicago opens the zoo at like seven in the morning to let people coming home from having sex use the walking paths. A lot of people had sex Satuday night.

The indoor exhibits weren’t open that early but some animal were out. Things went well. We saw a lion, a tiger a bear and they all looked really sad trapped in the zoo. 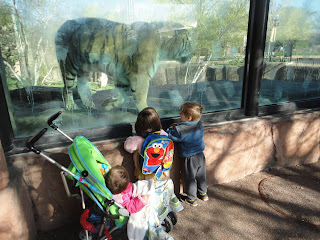 This tiger almost ate the children

A few hours later, things headed south in a hand basket. Xavier started grabbing his sister and fighting with her the whole car ride home. When we got home, we set them free in the backyard and Xavier knocked his Mother’s Starbucks coffee off the picnic table onto the ground.

She had it up to HERE with him so she took “Fifi” inside for her nap and at that very moment Bella (the oldest dog) poo-ed all over the family room carpet.

After said shenanigans the twins went upstairs for their nap. Thirty minutes later I could still hear them horsing around so I busted down the door of their crack house.

“What are you two doing?”

(They were standing on a mound of pillows, blankets and stuffed animals piled on top of Stella’s bed )

“We’re trying to reach that!”


Well, the last thing in their room that could have passed for “decorating” has been removed. Why do we have the only three year olds with a bedroom that has two beds and nothing else? This isn't Guatamala.

Things leveled out by the end of the day though. We got a baby sitter for the twins and took “Fifi” to dinner with us. Afterwards we got ice-cream (soy cream, for me) and ran into some friends we hadn’t seen for a while.

Being a parent and especially a mother is so hard and tiring. If you’re thinking about being a parent, a word of warning. All the friends that said they’ll help disappear when you have a kid. No one wants to help once they realize how exhausting it is. The only people that understand are other people with kids and those people HAVE kids so they have no time for your kids.

But remember, even with all the hard work, sleepless nights, the puking, tantrums and a bundle of money flushed down the toilet, your kid could still grow up to be jerk. Oh, and boys are harder. 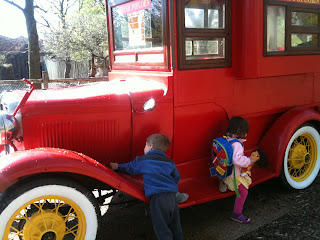 Xavier was more interested in this truck than the animals. This is what Chicago is still using to fight fires. 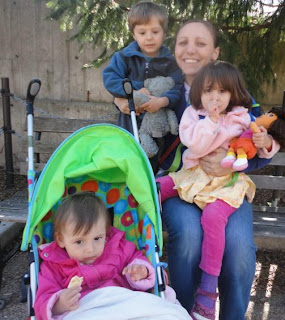 Kerry Lynn said…
Normally I hear the humor and sarcasm in your posts. I'm afraid this was actually serious. 3 is HARD! HARD HARD HARD. And there're two plus another one that needs attention. Hard I tell ya. 4's been good to us. I never thought we'd make it so just do your best to hang in there.
May 11, 2011 at 7:36 PM