Milk comes from boobs and cows

I took the twins out for a walk last week and the guys around the corner from us had these cows on their tree lawn. In Chicago the tree lawn is called a "parkway". I don't use that term because it's stupid like Sarah Palin.

At first I thought it was one of the city's public art projects but later in the day Anna found out that one of the guys is from Michigan and he won them in a contest; a hotdog eating contest is my guess. 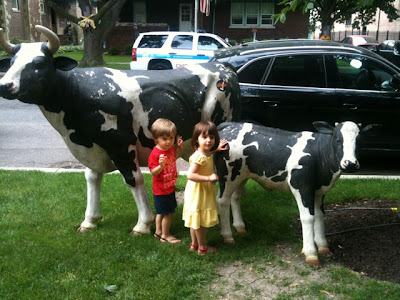 I'm pretty sure they had no idea the cows were fake. They're city kids. They think Whole Foods is a farm. 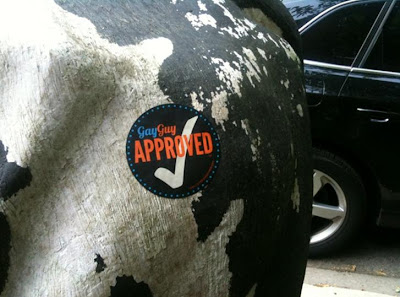 Sticker: "Gay Guy Approved"
The guy who won these cows has a blog 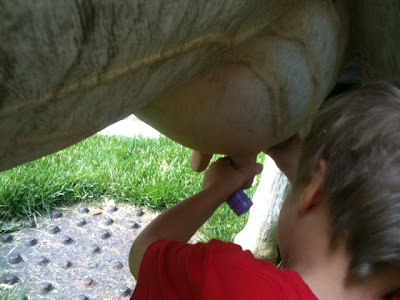 Wow, someone worked really hard on those veins.I can't even believe Amish people get their milk this way. If I was Amish I would NOT grow a beard without a mustache. 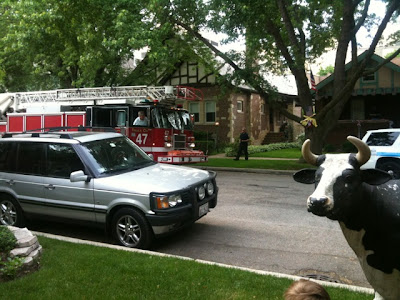 A fire truck showed up across the street from the cows. There was a fire that killed the entire family. Just kidding. It was a false alarm. I'm lying. I have no idea what happened. 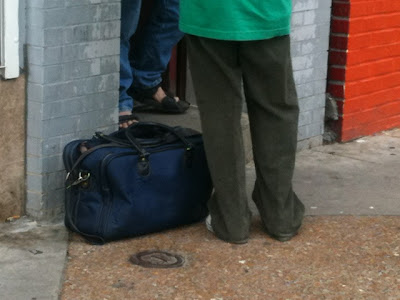 Anna and 'Fifi' caught up with us and the whole familia walked to Vietnamese Town for some sticky buns.


While I was waiting outside with the kids, some guy  tried to sell boots out of his bag to some other guy . I tried to take a picture while holding my phone by my waist so they wouldn't notice. Hmmm... Oh, that butt -not gay guy approved.

At the same time this transaction was going on, different men from all different directions kept coming up to the car behind me taking packs of Marlboro cigarettes out of the glove compartment.
Vietnam Town is nothing like the musical Miss Saigon. Nothing at all. Nothing.
Email Post