Our youngest Fiona a.k.a Fionka aka “Fifi” needs glasses.

Not in the fun way like if she’s playing the ugly girl in a teeny bopper movie who suddenly transforms into the hot girl by taking off her glasses and redoing her hair to attract the attention of some popular boy.

No, not like that at all. She needs them because she is significantly far sighted. FYI, that girl in my above example could have accomplished the same thing by being a total slut. Actually, most women can accomplish their goals significantly faster by focusing less on brains and more on sluttyness. One word, “Former governor Sarah Palin.” 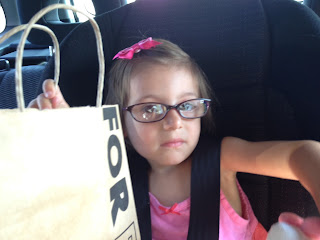 Anyhow, she won’t wear the glasses and we are really out of ideas. She grabs them off her face and throws them back over her head giggling, “No glasses!” 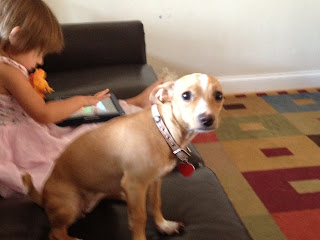 File under increase our stress for no reason….Anna came home from work Friday with this dog.

One of her patient’s friends, was being evicted for not paying property taxes in 10 years. Anna felt bad for this four-month-old Chihuahua and brought her home. This would not have been my way of handling this. I would have called a Korean restaurant.

Now we have three dogs and three kids. Anna renamed her Danusha.  The kids like her because she fits in the dollhouse and the doll beds. She has also poo-ed on the floor two times. 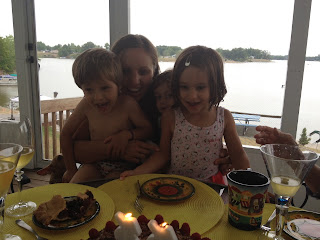 We went to Anna’s parent’s cottage to celebrate her 33rd birthday. We brought Danusha with us. When Anna blew out the candles, I wished that Danusha would grow wings and fly away. It did not happen. 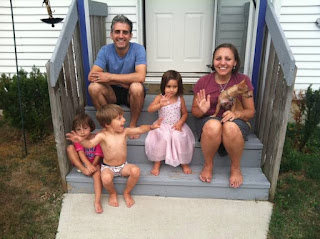 Our son wears his underwear in public. We don’t even try to be civilized anymore. Prior to this photo, he took off all his clothes so that he could swim in the pool nude. It's his European roots. 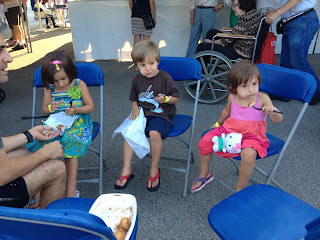 After we got back into town Sunday, we went for a run in the triplet stroller then stopped by the Greek festival and fed the kids loukoumades for dinner. Do you see the woman in the wheel chair in the background. I bet she has about a week left.
Email Post