NYC Wedding. How do you like them Big Apple?


We went to New York City for my cousin's wedding and then spent the week with my parents visiting relatives, etc...etc.

After landing at LaGuardia we got a rental mini-van and headed to the hotel.

We got to the hotel and left the van for the valet and then went inside to check in. Our room was ready first, so we left my parents in the lobby and took the kids upstairs to rest before the rehearsal dinner. 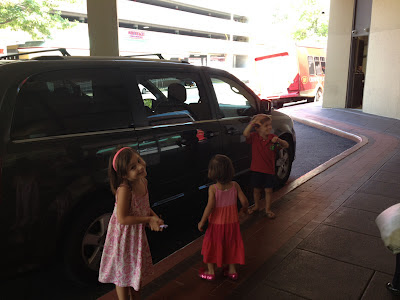 
Isn't this a great mini-van?
I really hate mini-van's.
I hate them more thanI hate cupcake stores.
Why are there so many cupcake stores!!
A few hours later, I called down to have the mini-van  pulled around by one of the servants Heidi Kulm slept with. The valet tells me he needs the number on the valet card. I didn't have the card so I called my dad and asked for the number. He's all, "I don't have the card your mother has it." He wasn't in the room with her. He was wandering around. Typical man. I called my mom, "Can I have the number off the valet card?" She's all, "I don't have the ticket, your father has the ticket That stupid SOB (my words)." I'm like, "He said you have the ticket!!!"
She then gets all worked into a tizzy because she thinks she lost the ticket. A three-way back-and-forth ensues over cell phones because no one can talk in person because we are not that type of family. We use technology
Finally, we go to the lobby to resolve this and looky there. The van was still in front of the hotel, with the key in the ignition,  still running, two hours later! We forgot to tell the hotel we were valeting the car.
When we go outside, the valet guy is like, "Is this your car? We didn't know what to do with it." I suppose maybe turning off the ignition would have been nice. 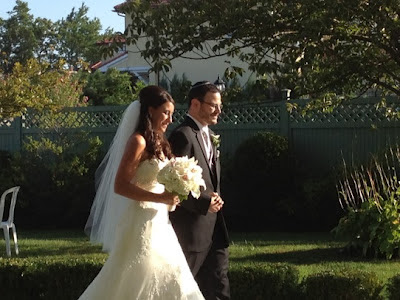 The following day was the wedding.  My cousin married a nice Jewish man.
NYC is 90% Jewish and 10% everyone else.
She's half Italian and half Greek.
Can you image the accents at a Greek, Italian, Jewish, New York wedding?﻿ 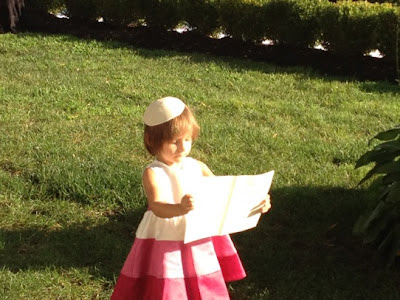 'Fifi' thought the Yamaka was her hat.
She kept saying, "Where my hate" when it would fall off. 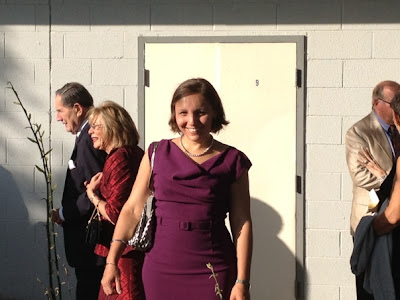 Anna wore  the same dress to the wedding that the bride wore
to the rehearsal dinner.
Just to clarify, it was not literally the same dress. 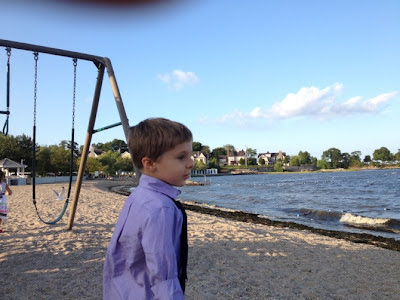 The ceremony was at a country club that overlooked the ocean.
During cocktails and before the reception, I took the kids to the beach
to trash their wedding clothes. And "yes" I wanted my index
finger in the top of the picture. 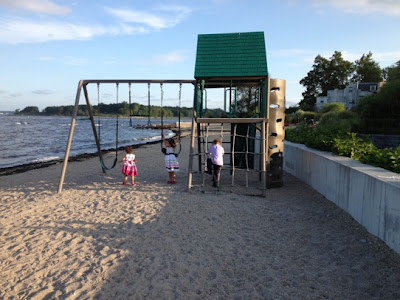 The slide becomes a water slide when the tide comes in.﻿ 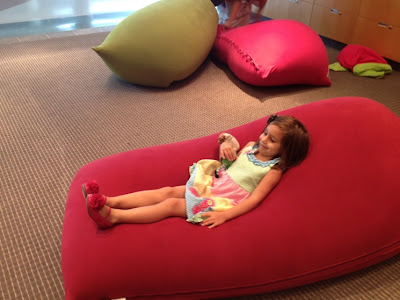 The next day we went across the street to this store that sold overpriced bean bags. The kids actually wanted to play on them. The sales person showed us how to make them into a chair with extra support. Do you know what else I can use to sit on with extra support? A chair. 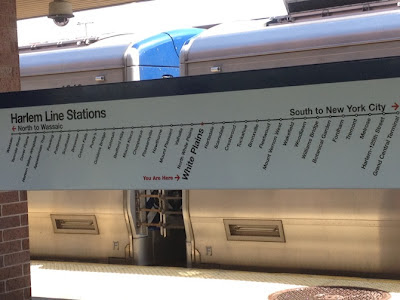 Tuesday after the wedding, we left the kids with my parents and headed into the city to meet some friends for lunch. I love NYC. I know there's a song about this and all but it really is the best city in the entire country. 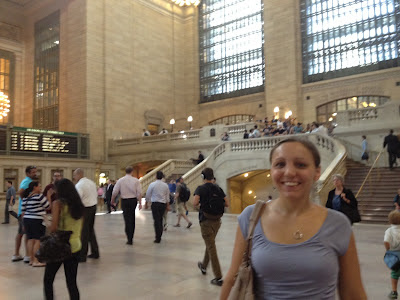 We got off at Grand Central Terminal/Station. I have not been here since Jackie Kennedy Onasis pushed the city to remodel the place. Sorry about your husband being shot. Grand Central is amazing. It's an entire world of restaurants, shops, cafes, an Apple Store. It was nothing like the bus stop that criminals use to get around the country after being let out of jail only to murder some hitchhiker. Let's get tough on crime!! 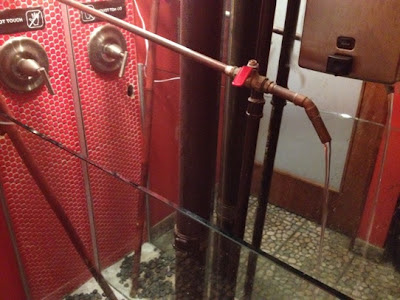 This is the sink in the restroom of the Thai restaurant where we met our friends. WTF! They plumbed this for a shower. Then they did not seal the pipe into the wall, left off the shower head and bent the pipe forward and added a valve.  It drains unto a pile of rocks into a hole on the floor.I peed into it until I noticed the toilet. The food was fantastic. 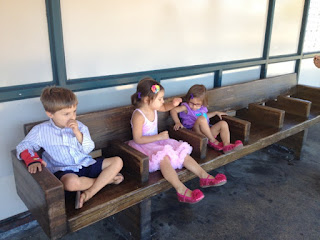 The next day we took the kids on the train to central park. Let me tell you something and this is a fact because I said it. The people on the trains are way nicer than in Chicago. Every single train we got on (and that is a lot in NYC. You have to take like the number 2 to the number 4 to the B then switch to the C then magic happens and you are there)...well, every train we got on, someone offered to let us have their seat when they saw we had three little kids. WTF!
In Chicago, you could have two broken legs, crying on the floor and everyone looks around like they don't see you. I know because that's what I do. Hey, I'm not perfect. Yes I am; a perfect ass. The kids played in the giant central park sand box.  It was like the Sahara dessert.
That's a big dessert you have to go through to get Out of Africa
where a man named Lawrence Arabia lives who slept
with Meryl Streep. 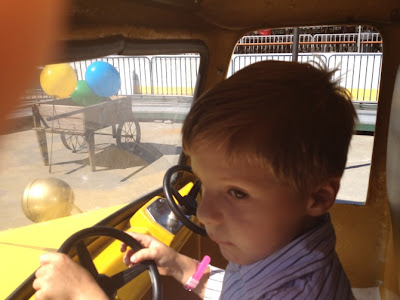 The kids went on the rides at the Central Park amusement park. Yes, there is an amusement park inside a park. The concept is amusing to me. I think it cost like $60 for all of us to get in the park and ride one ride. Then another $15 to buy the smallest ice cream cone in the world.
I really think it sucks these days,  the way you can't do anything with your kids without spending a fortune. I know there are free things. But when you want to go to a sporting event, aquarium, zoo or skydiving it costs so much money. We are fortunate enough to be totally loaded, but that's beside the point. It's really getting absurd.
My parents spent $100 taking the kids to the Bronx Zoo. Sucks to be them. It was free when we were little because my grandparents always lied that they knew someone important that said that they could get in for free.
Some of these things have free days but on those days everything is so packed with people you could die in a stampede like in India. 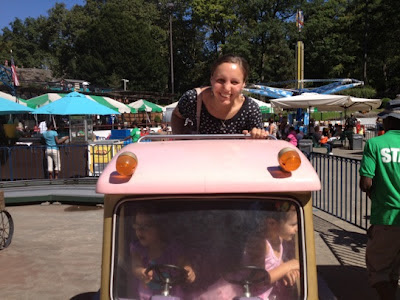 Anna rode in the pink car with the girls. 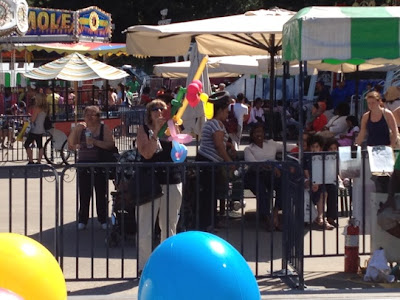 We made my mom carry all of our crap while we had fun on the rides.
Sucks to be her! She even paid for the ride.
FYI, she's carrying balloon animals some stranger/child molester made
for the kids in the park.
Email Post