Skip to main content
September 19, 2012
The other morning, we woke up to blood in our bed. I was NOT murdered if that is what you were thinking. But it was a mystery theater.

Danusha and Bella had a fight the previous evening so we thought maybe Danusha was hurt. They are both girl dogs so it was a cat fight.

We couldn’t find any abrasions on Danusha so we were stumped. We waited; silently. You could hear a pin drop because we have wood floors.

A few hours later, Anna noticed blood streaming out Danusha’s vagina. If you went to a Christian sex-ed class, you have no idea what I’m talking about because you never heard the term “vagina”. “A baby is made when God blesses the mommy and daddy and God sometimes blesses daddy’s secretary.”

Put the pieces together people. Danusha is in heat. Male and lesbian dogs for miles are headed our way.

AND… the book “Chihuahuas for Dummies” told us that Chihuahuas menstruate for two weeks. Can you imagine the amount of car accidents there would be if this was the case with people women?

Basically, our dog menstruated on our bed. This is like college when a menstruating sorority girl pulls out her tampon to have sex. Let’s see here, I’ll place this little do-dad on the nightstand until we’re done .

The next night, we made Danusha sleep on a rag. She was literally on the rag! Ha! She was on the rag people. You can’t make this shit up. Anna went out and bought some doggie diapers. 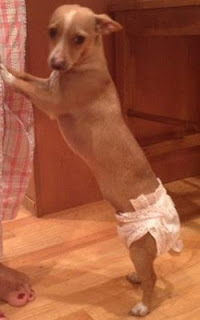 We have a kid still in diapers and now a dog in diapers.

I was not surprised they made doggie diapers because I worked at a pet store during my high school years. I worked with the girlfriend of the first Nine Inch Nails guitar player. She wore head to toe black every single day and had fake green contacts in her eyes.

These are the days of our lives as the world turns young and restless.
Email Post