The first thing you need to know before going to Japan is that Chinese and Japanese are two different things. In the West, not a single day goes by without someone saying something like,  “Chinese or Japanese? …Whatever, same thing”.
No, actually. They are two completely different restaurants.

My absolute favorite etiquette of the Japanese people is how no one talks on their cell phone if they are waiting in the vicinity of other people. This is what I can’t understand about people in the US.

If you are sitting at a table in a restaurant, if you are in a waiting room, if you are on the bus, if you are on a train, if you are standing in line DO NOT TALK ON YOUR CELL PHONE!  Move somewhere away from everyone else and have your conversation. Thank you. Now the world will change after I made my commandment.

The Japanese people are really, really polite. The strangest thing to me was how everyone stood in line to board the train or go up an escalator. If you are the first person at the train door, all one hundred other people waiting to board the train fall right in line behind that person. The line could go a mile and no one would cut. NYC is just like this except without line and occasionally someone gets pushed onto the tracks. 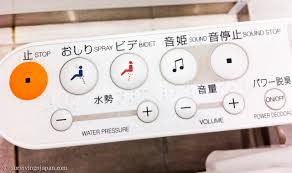 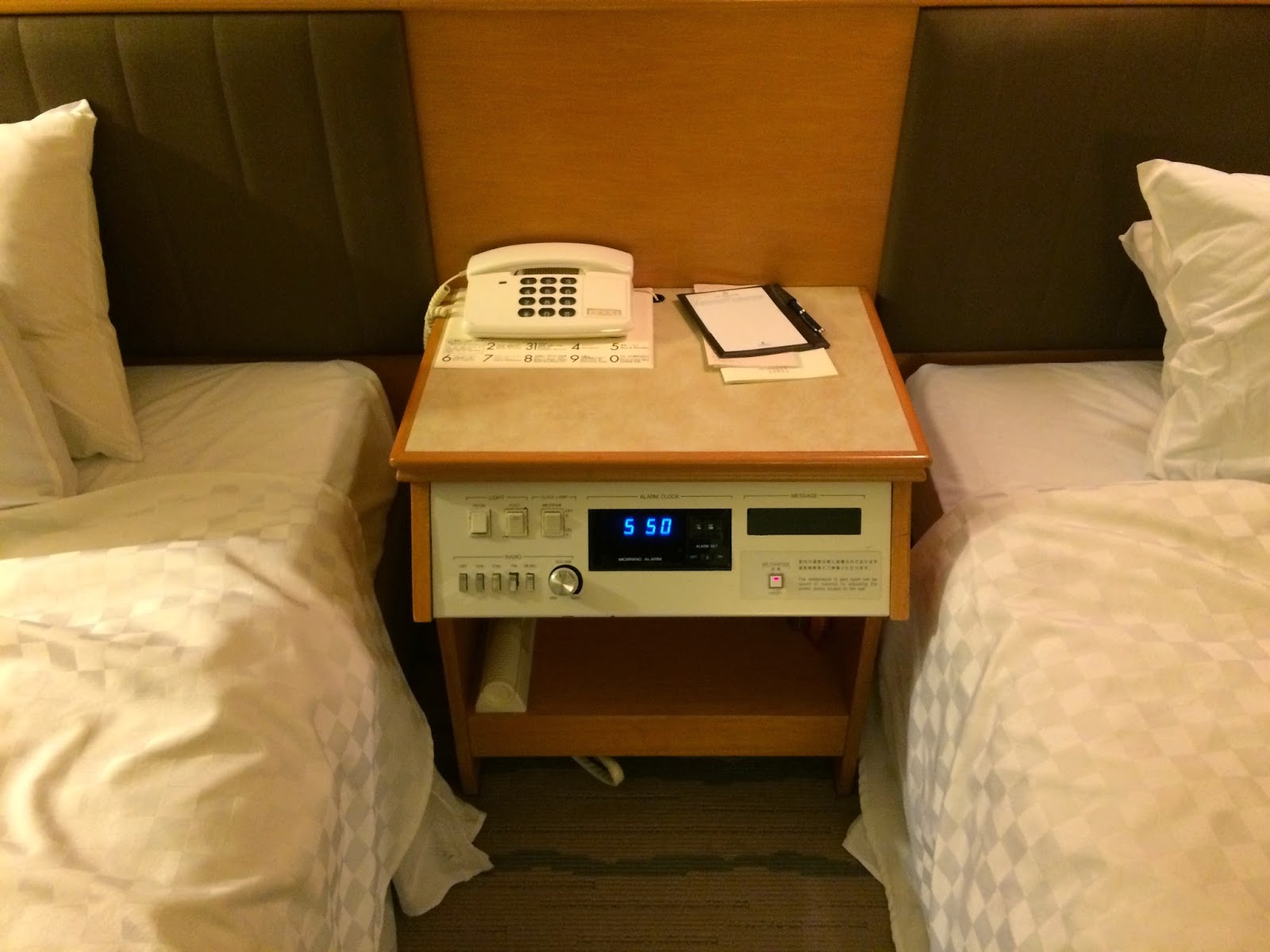 Our hotel room had this great radio from a James Bond movie. When I pushed the button that said "music" a lady speaking Japanese would start talking.

Whenever I learned a new Japanese word, I would sing the 80’s hit, “Turning Japanese” by The Vapors. No one laughed because they aren’t allowed to laugh in public. But trust me, my delivery was perfect, I was HILARIOUS. 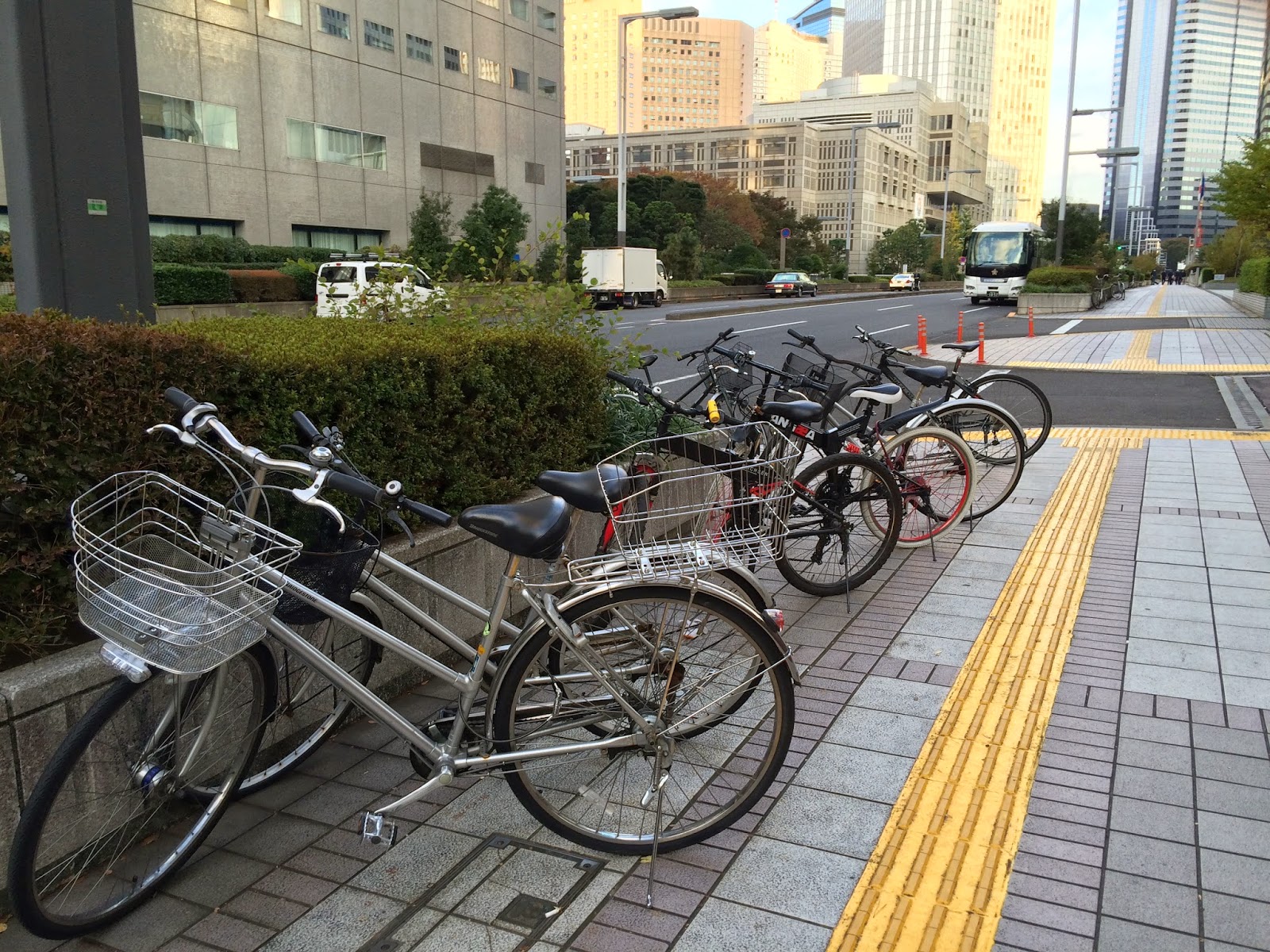 The people park their bikes like this all night with only a little lock attaching the back wheel to the frame. No one wears a helmet and people ride on the side walk like savages. 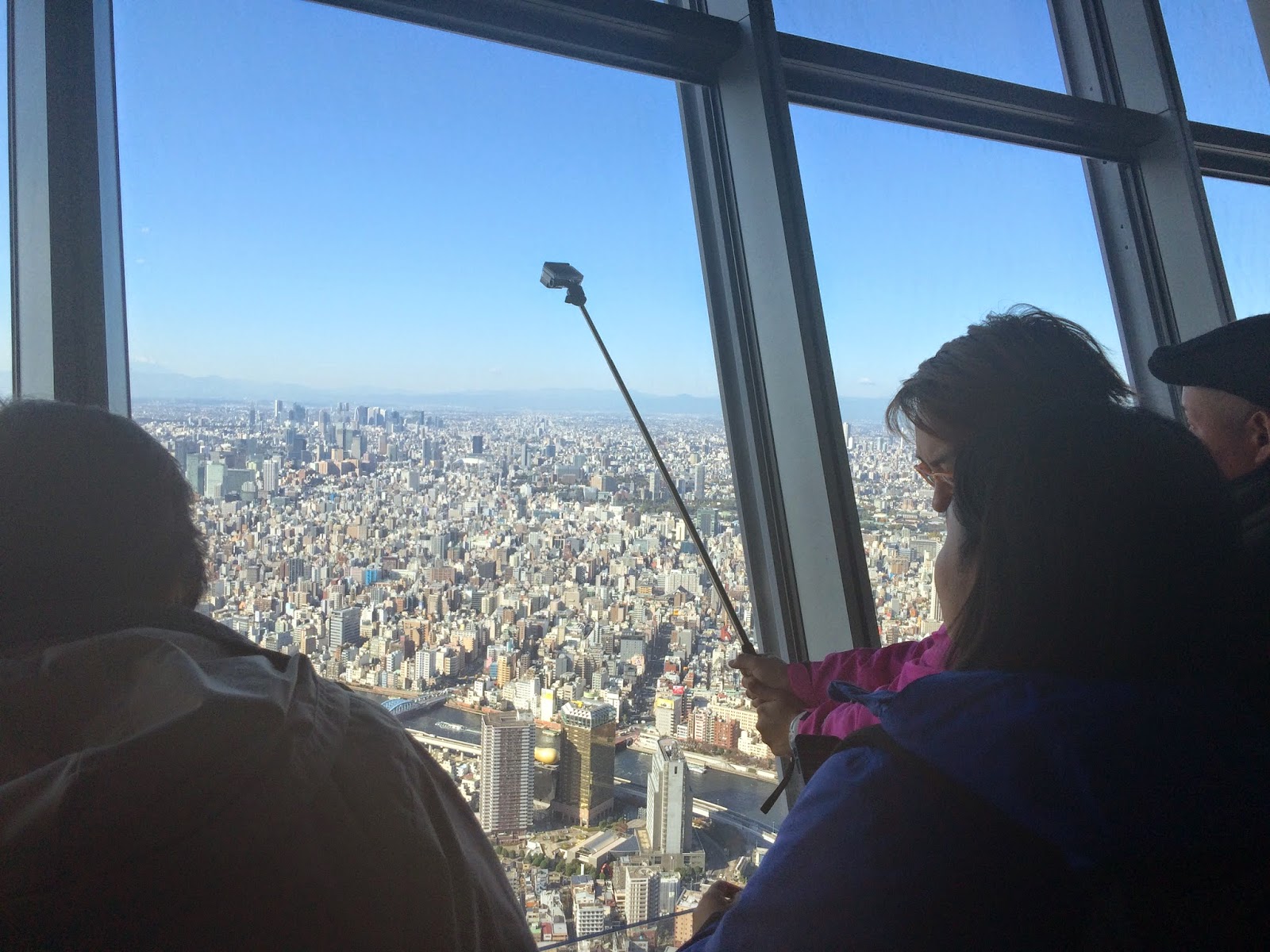 Many people had these extension poles to take self-ies with their phones. I would pretend it was a light saber if I had one of those. 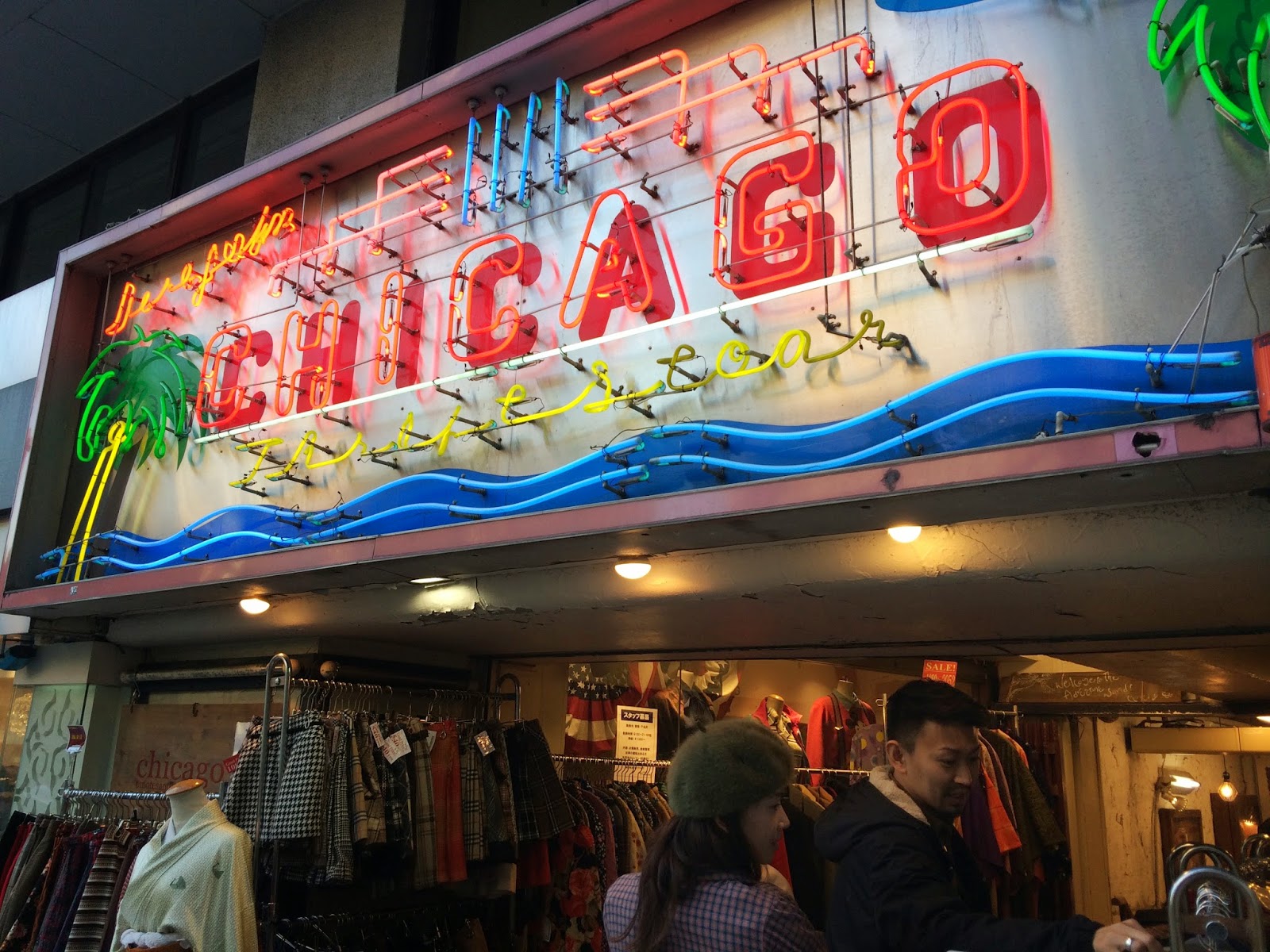 This was a store that sold "Chicago" clothes. In their version of Chicago there are palm trees. There was also one of those stupid Garrets Chicago popcorn stores in Japan and the line went down the street like in Chicago. People, it's only popcorn...seriously. 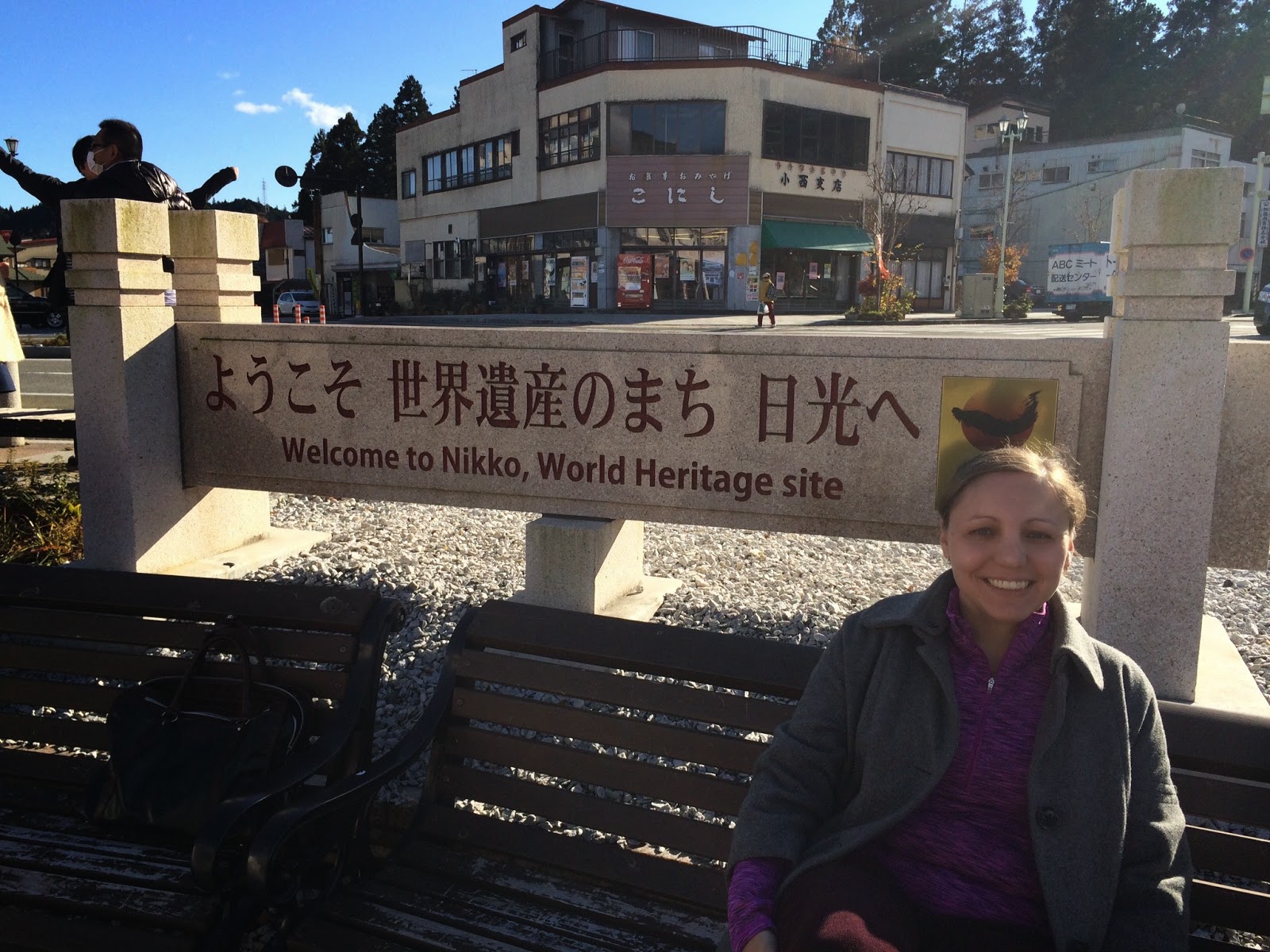 We went to Nikko for the day using the bullet train. Nikko's specialty is tofu "skin". The outside part you can peel off tofu. We ate a ton of it. Yummy tofu skin just like baby skin. 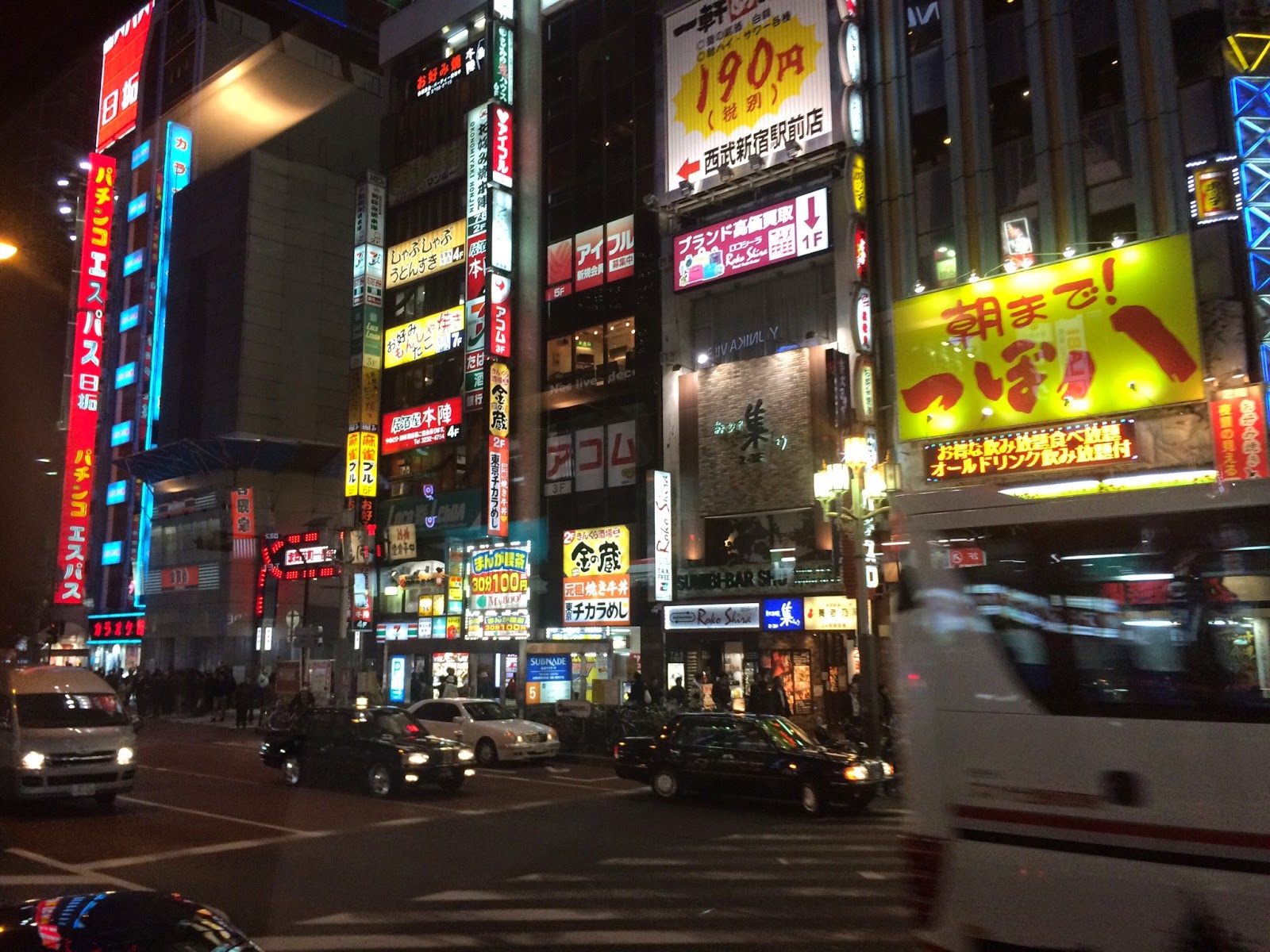 Some part of the city at night. I can't remember where.

There are a lot of surgeons in Japan and they like to wear their surgical masks everywhere. I wanted to start a photo series on this but people seemed to be getting mad when I kept taking their pictures. 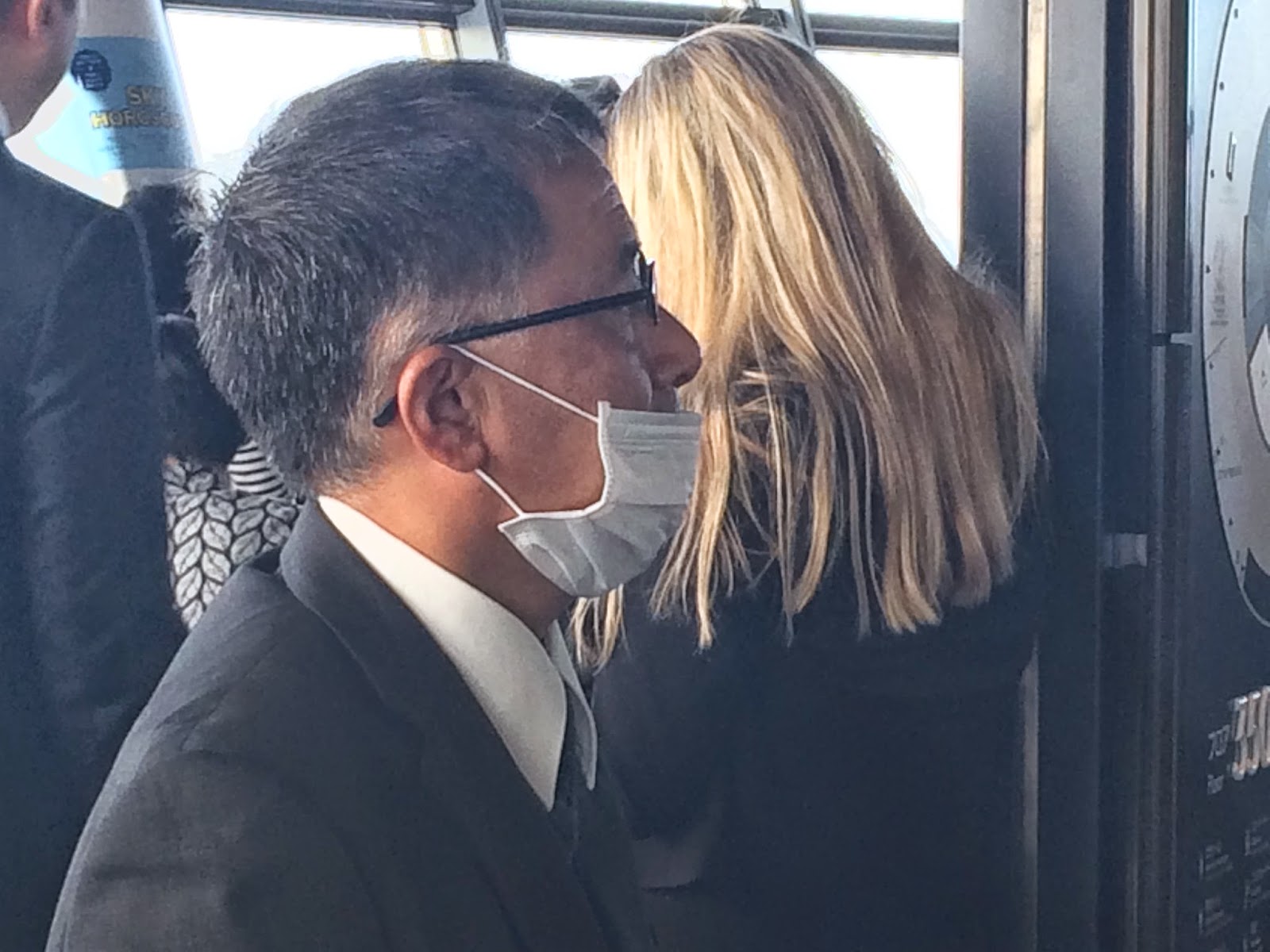 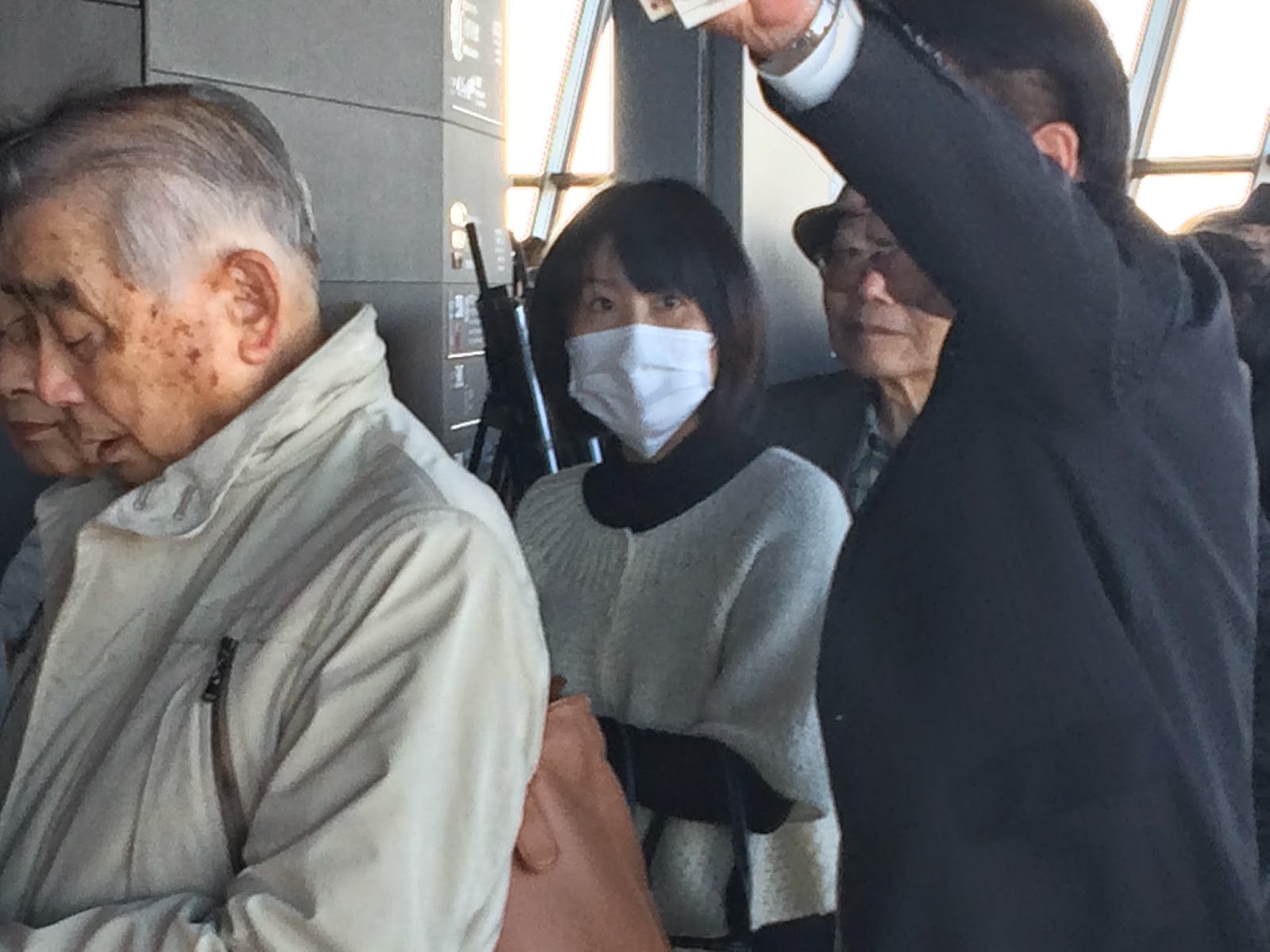 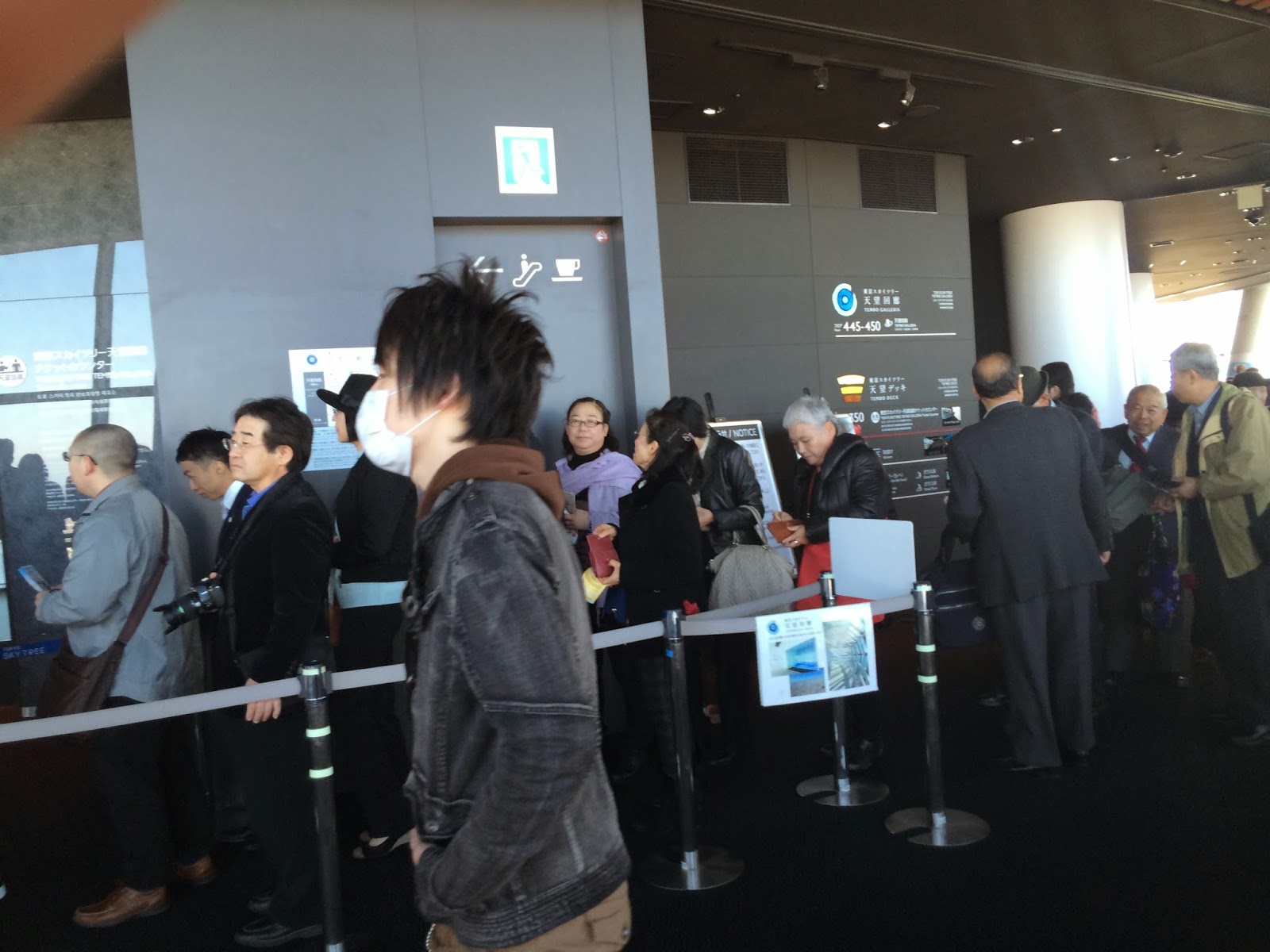 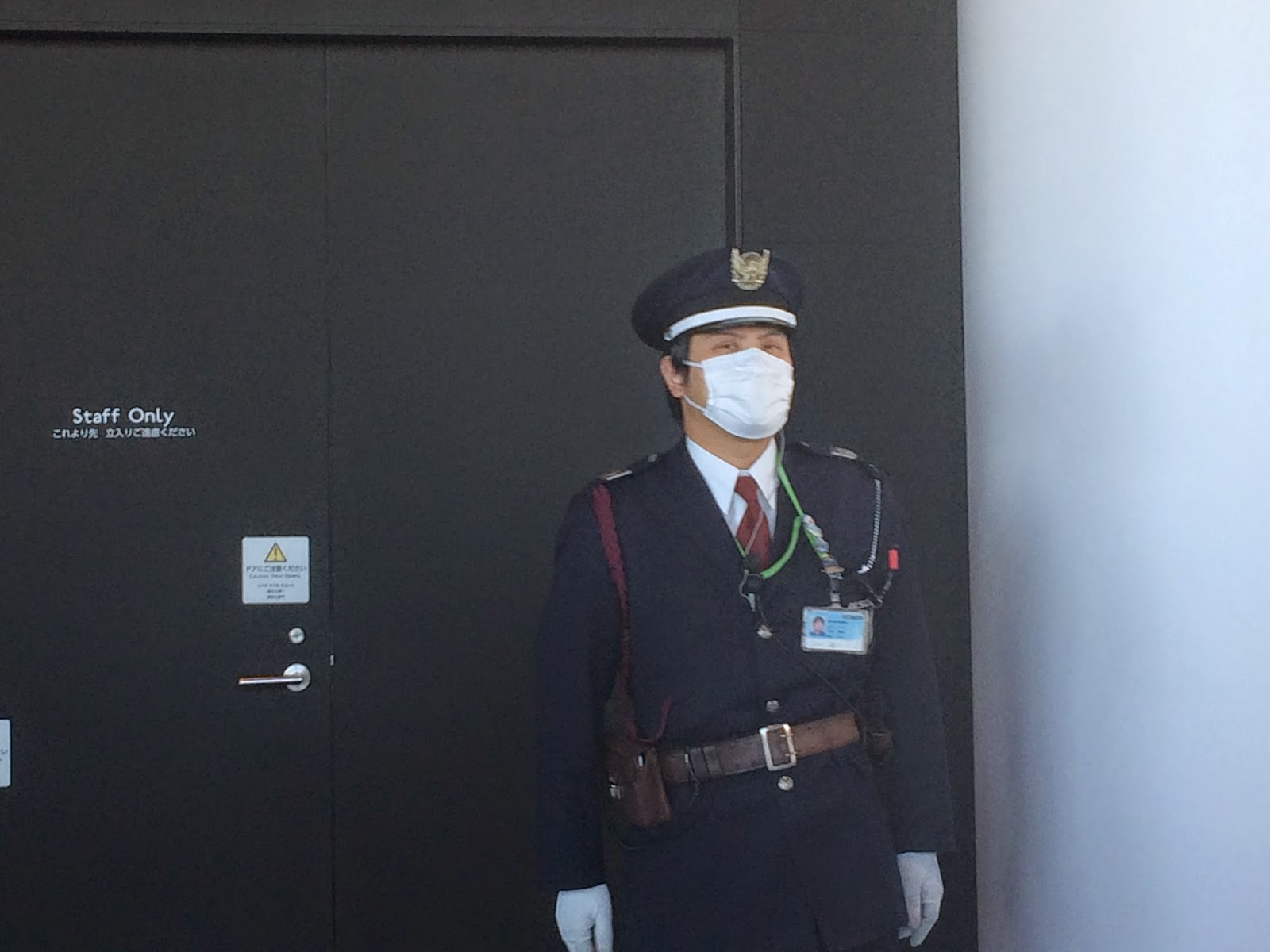 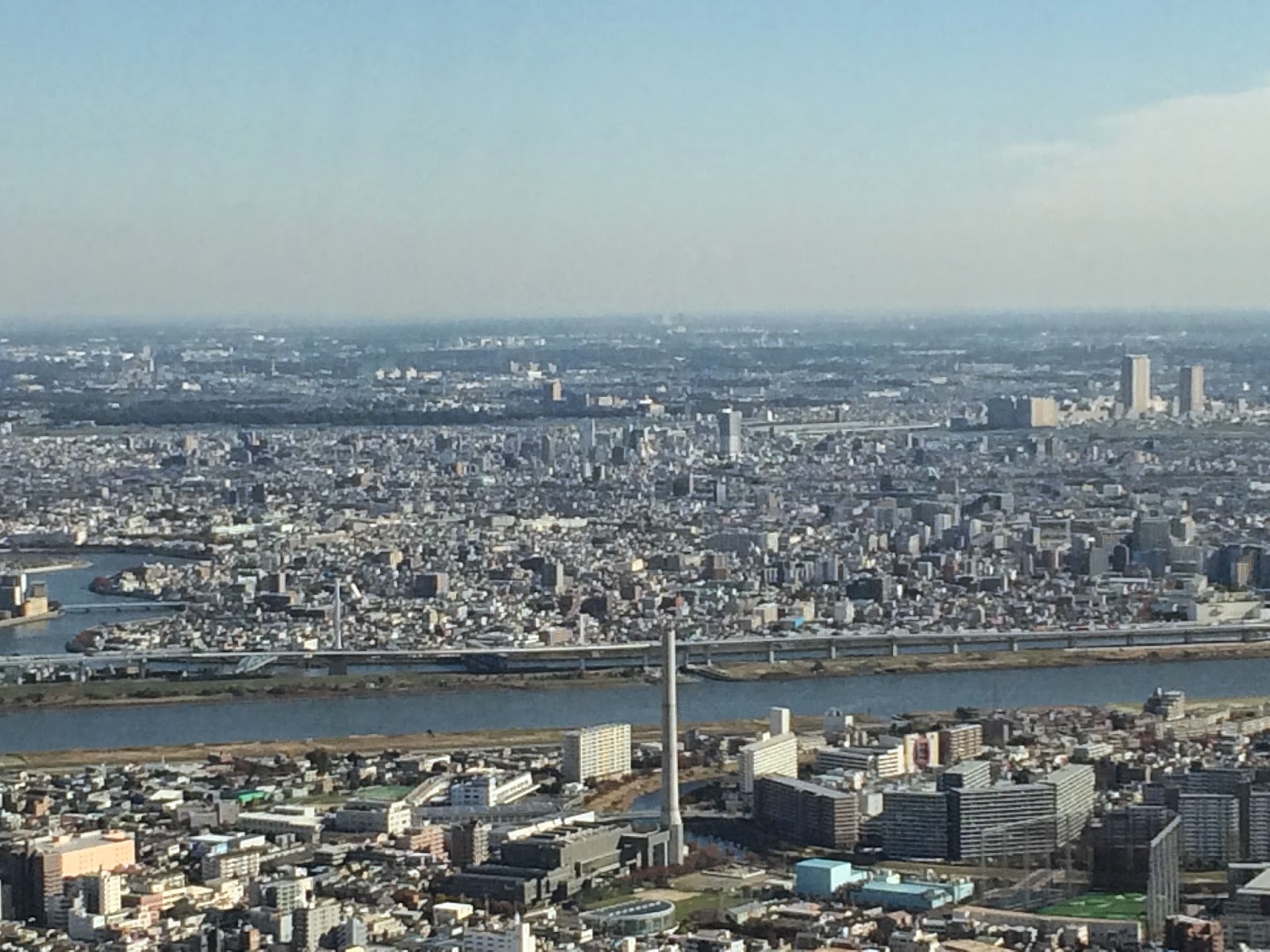 This is a picture from the top of the "Sky Tree" or "Sky Tower" or whatever it is called. There is a window at the top and I took this.

The Fuji Mountains are in the way way back. Yes, they named the mountains after a Fuji camera company; that's such a Japanese thing to do. 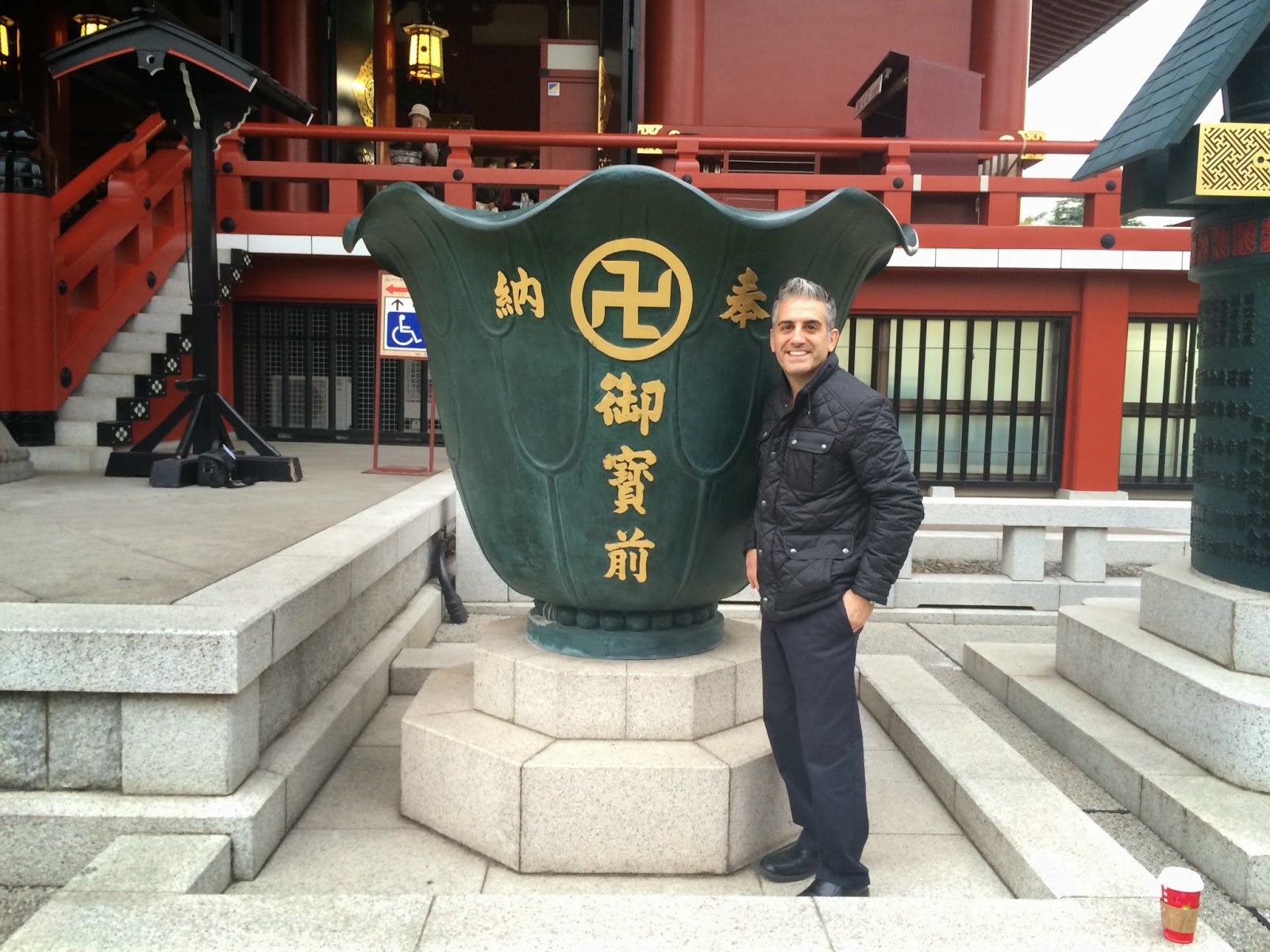 Holy Crap! Fooled you. The symbol is the pre-Nazi version.
Crap, I though I put my Starbucks out of view. In Japan, when you order soymilk at Starbucks they give you this card explaining how they care about your milk allergy. Japanese people care about me. 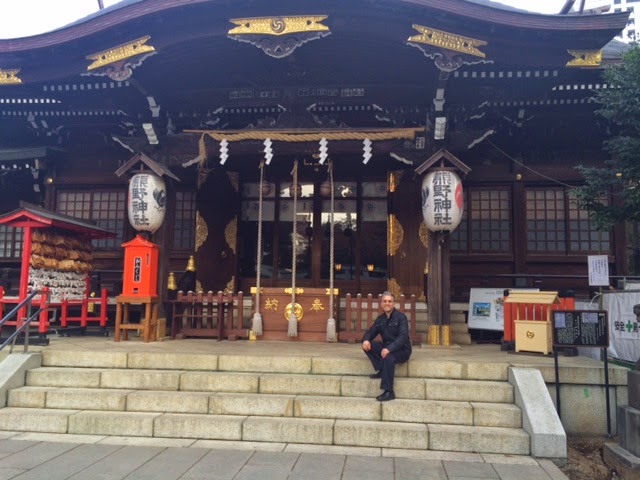 This was a shrine by our hotel. I went there every morning to pray that some of my greatness would rub off on others. 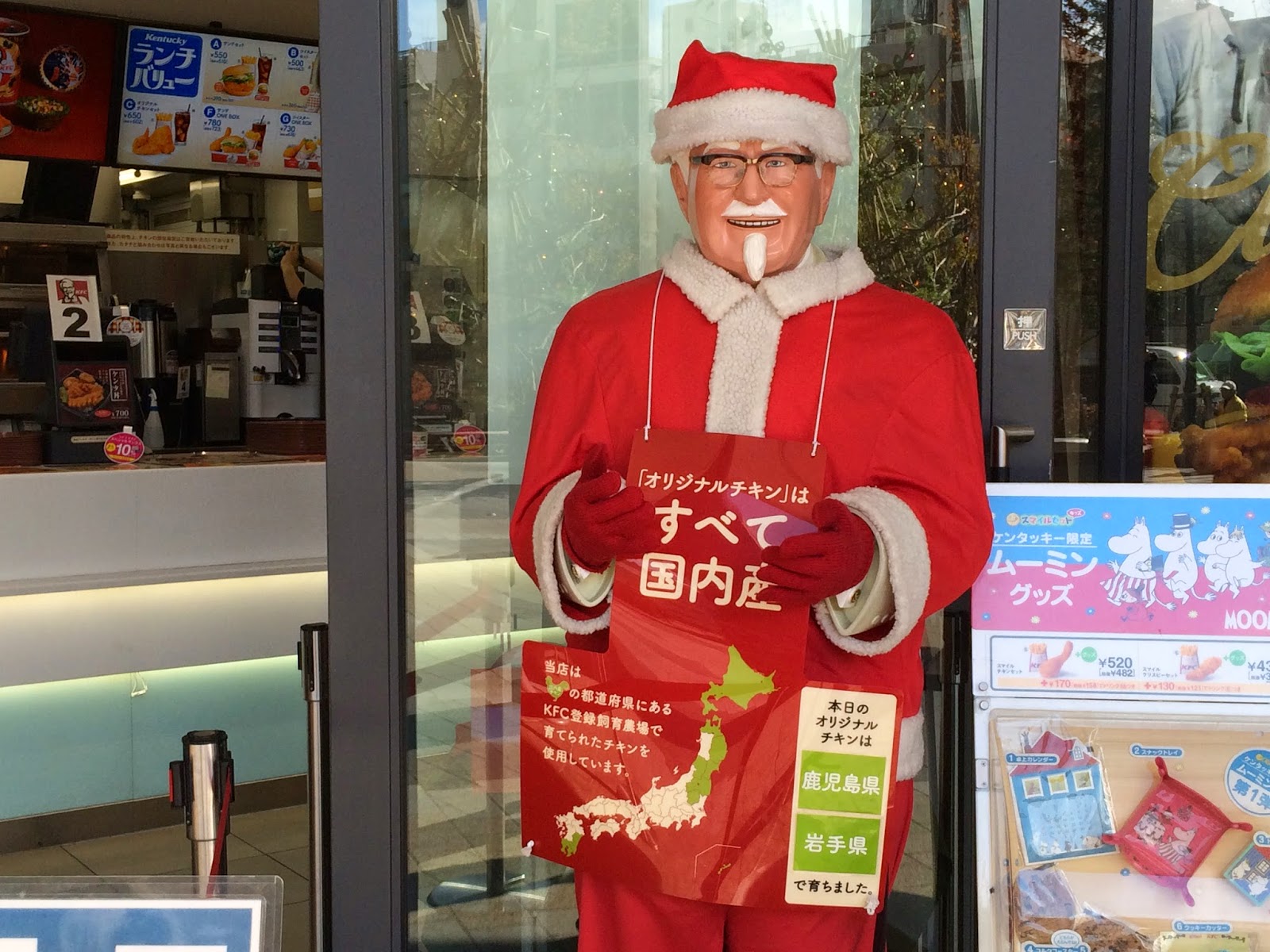 Japan is less than 1% Christian yet they LOVE Christmas; the Santa Clause version. Wait a minute. You mean they're a highly educated,  hard working people with a strong commitment to family and more than 99% of the population isn't Christian!! Kirk Cameran, how is this even possible!?!!?!?

There is Christmas stuff everywhere and this was November before Thanksgiving, 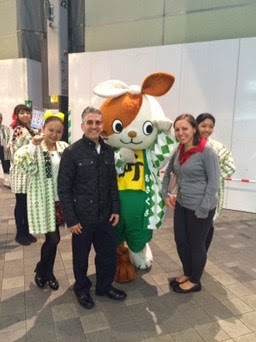 The mall was advertising their mall and wanted a picture with us. Whenever they promote something in Japan you get a free pack of tissues with some company logo on them, Such an advanced and clean society. 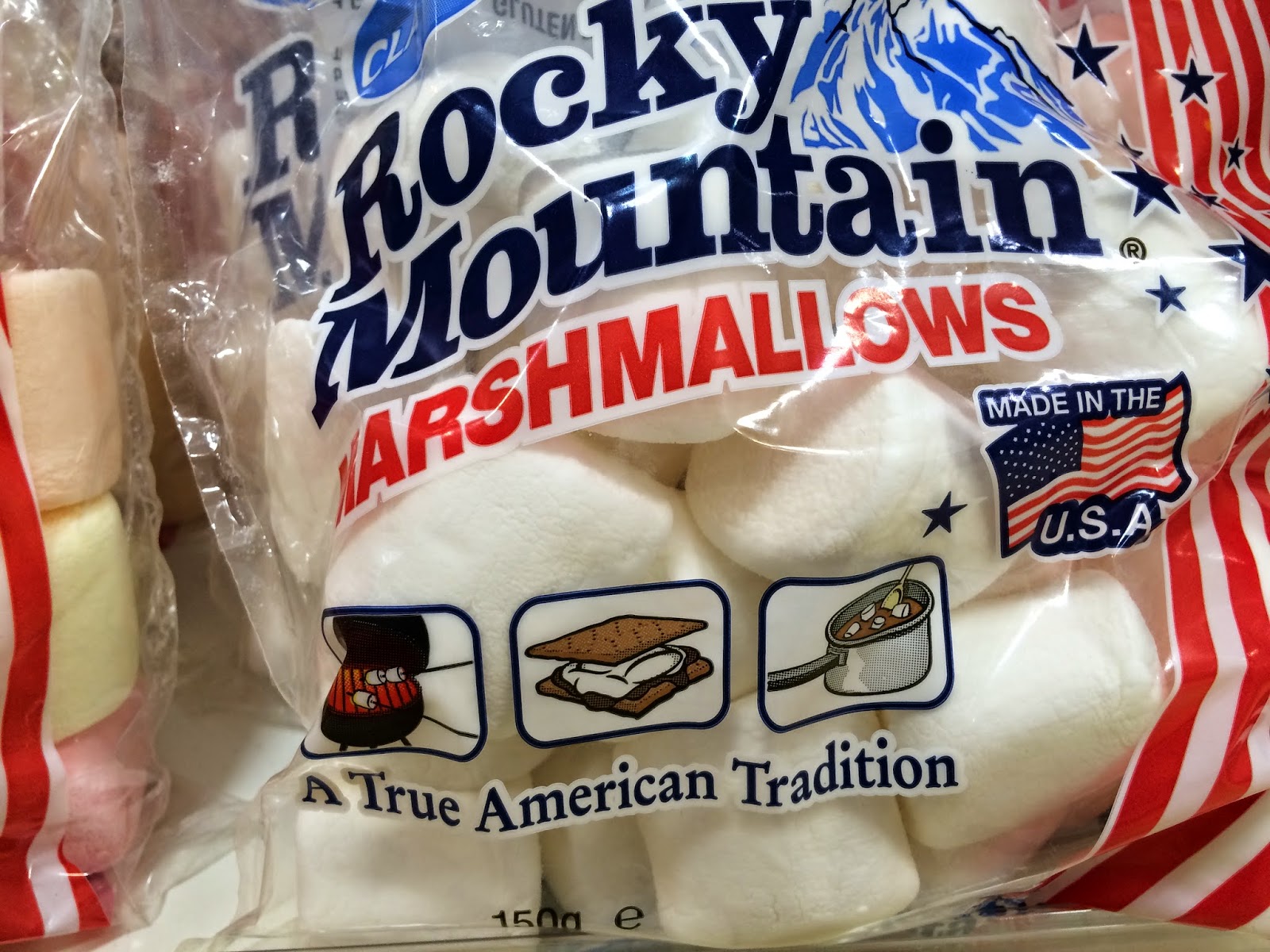 This was for sale in the store at the hotel. So this is what they think of America. Notice how the picture shows roasting marshmallows on a grill. 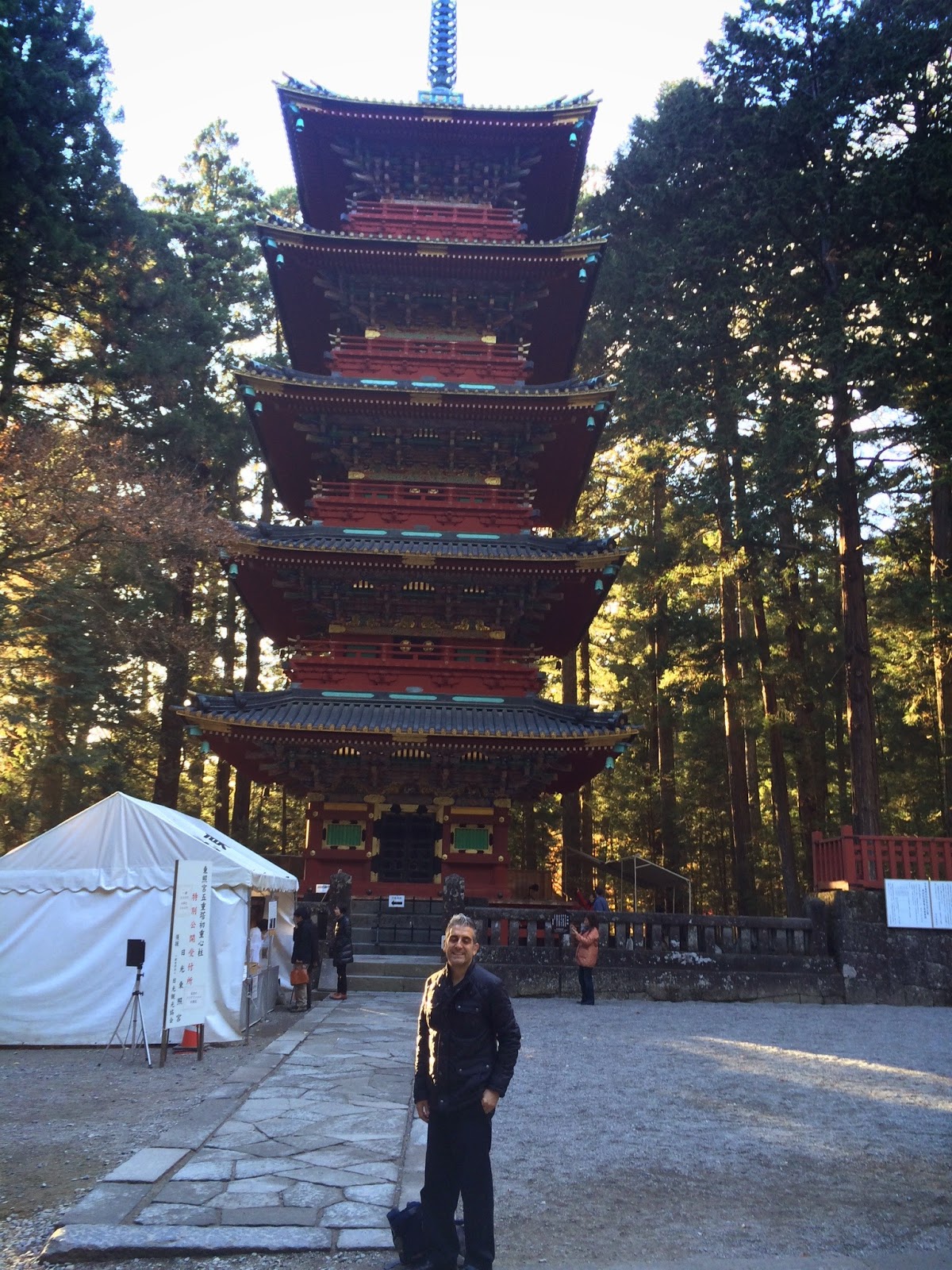 One of the pagodas where Buddha's ashes are buried .  There is some significance to the height but I can't remember how high they are or what the significance was. 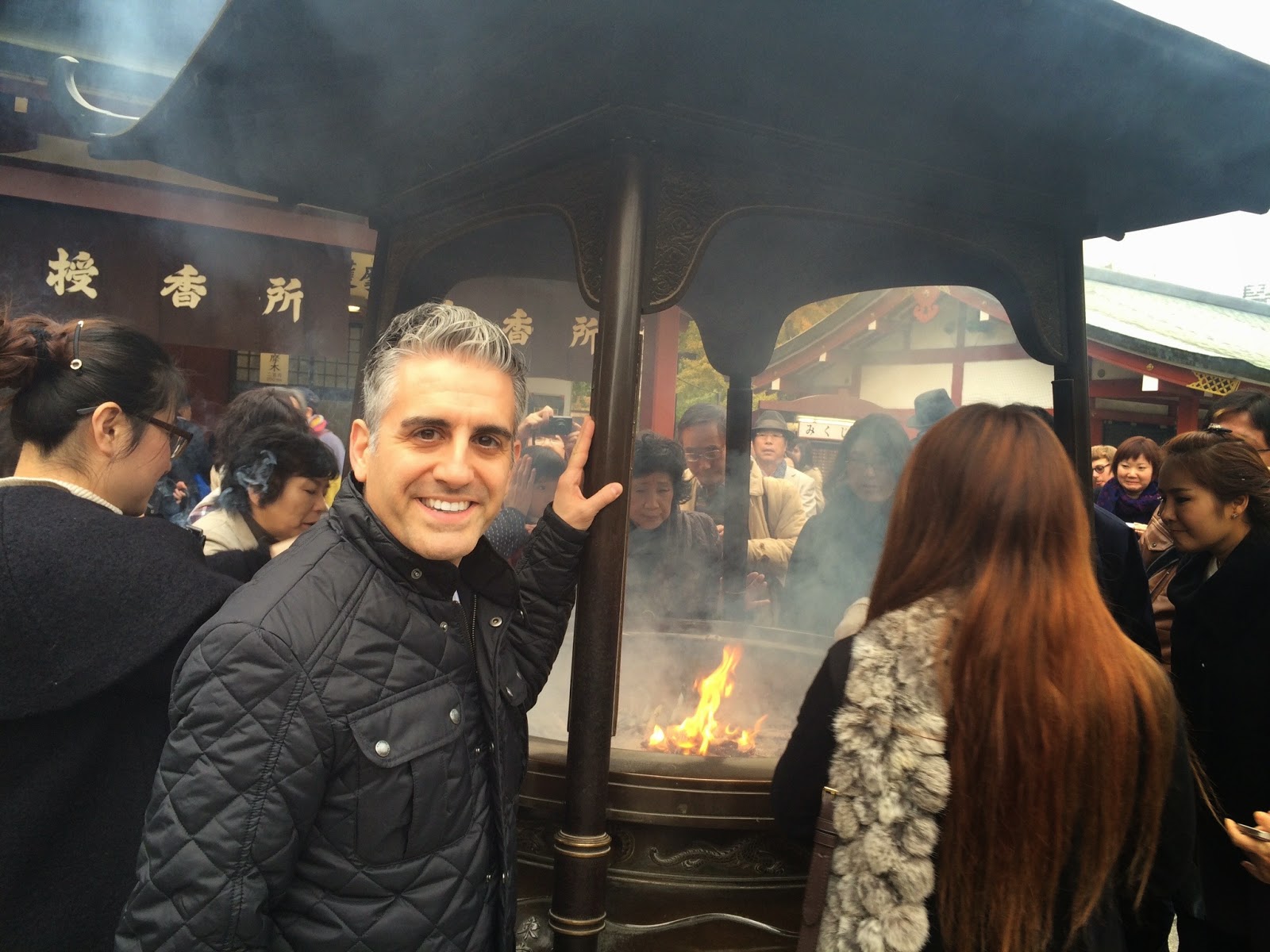 Here is me at another Shrine. Most of the shrines are a Shinto / Buddhist mix. People wave the incense smoke on them to cure their ailments but all it does is give them cancer. 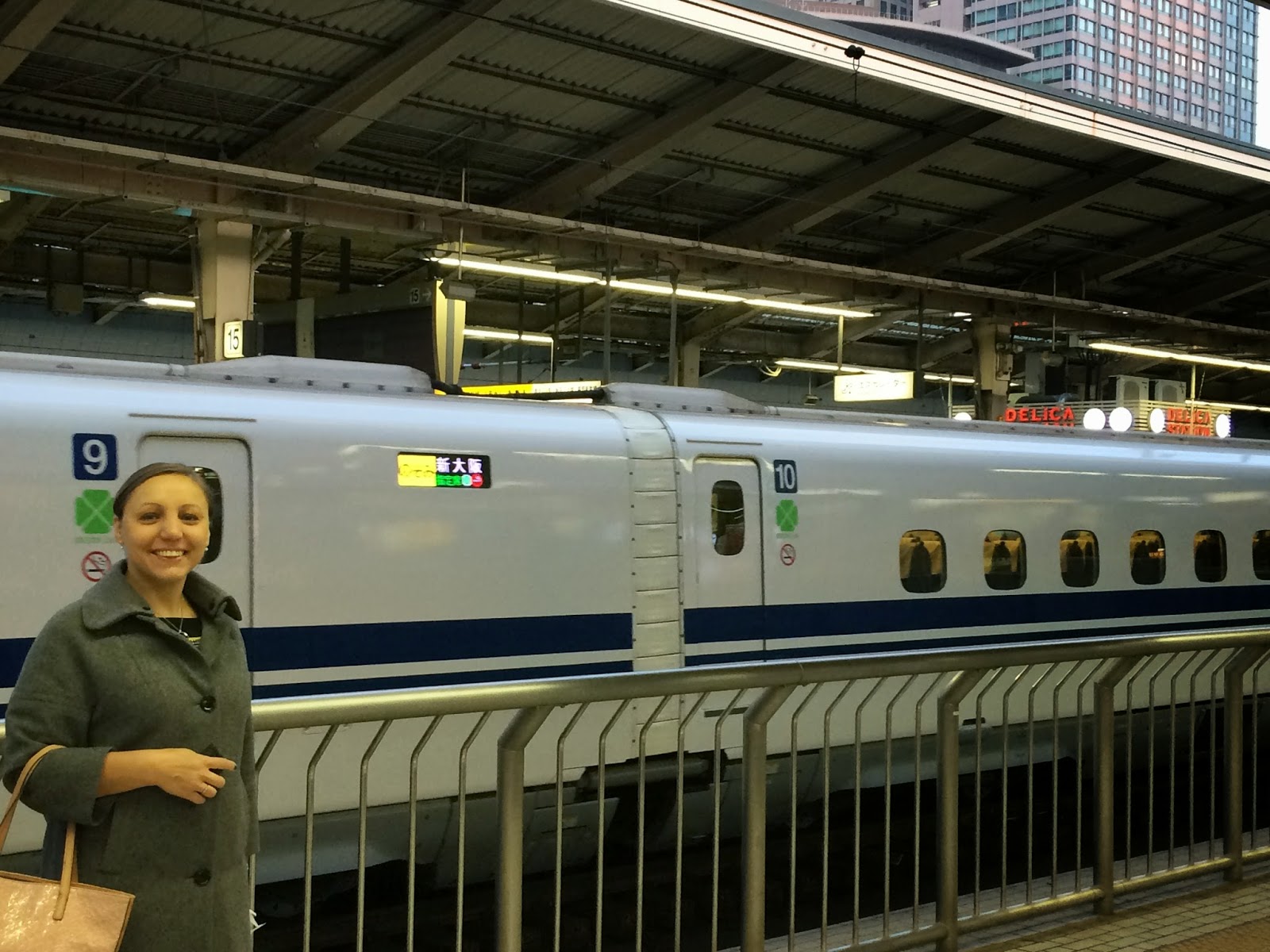 Anna and a train. I'm not sure what train or where this one was going. We did take the bullet train to Kyoto where the environmental treaty that no one used was signed. 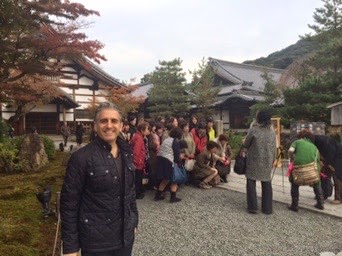 I tried to photo bomb these people taking a group picture. 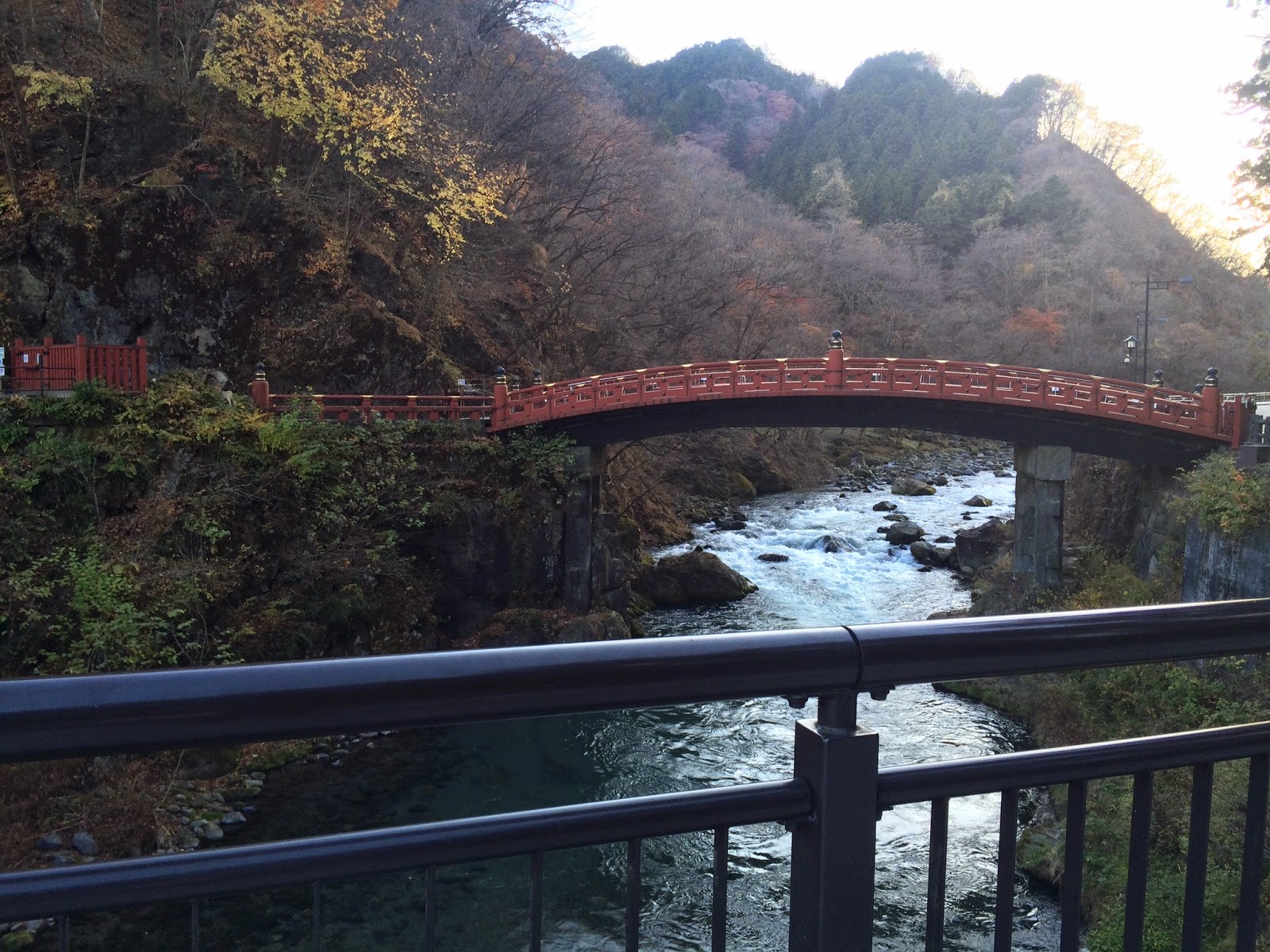 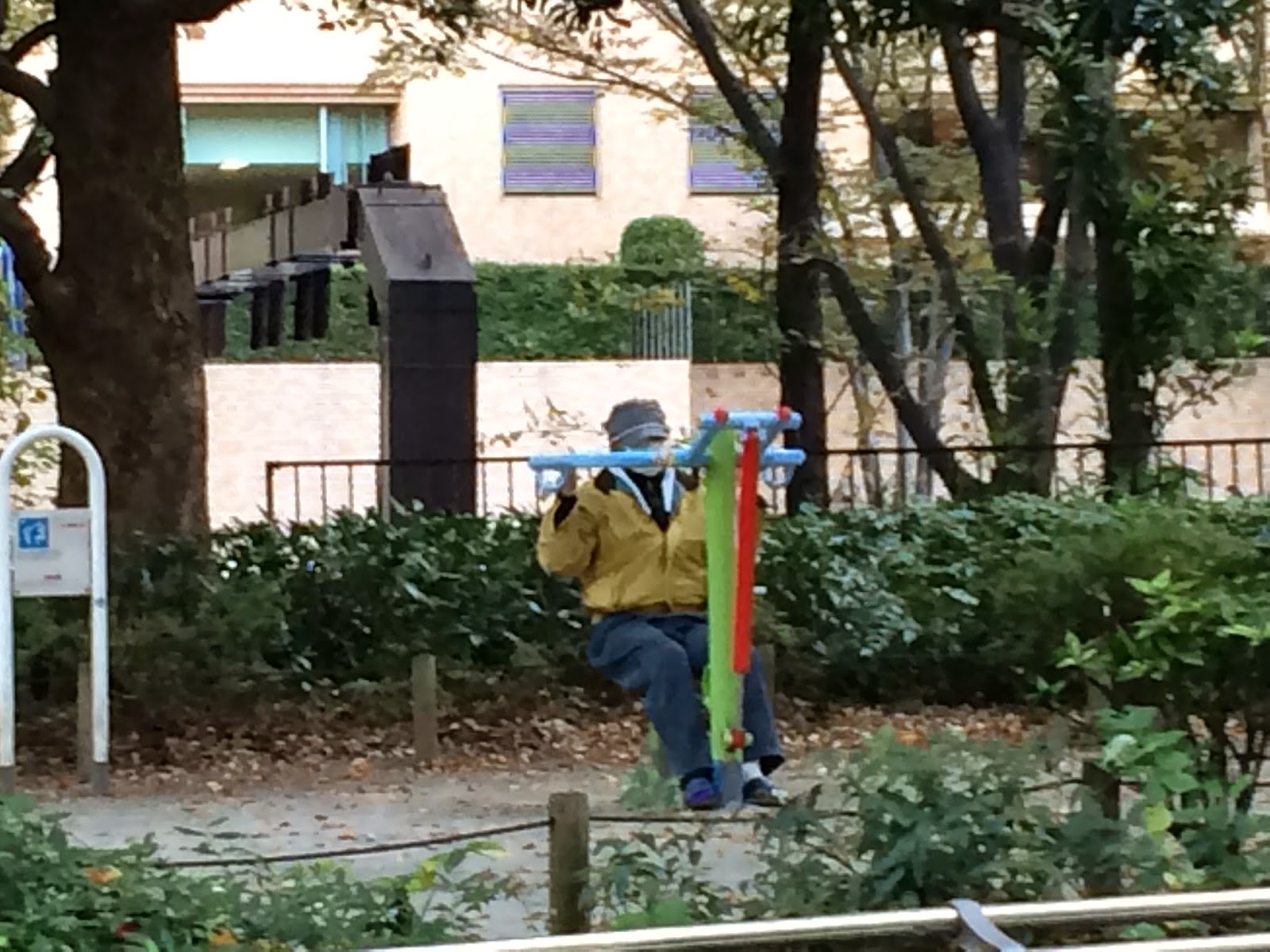 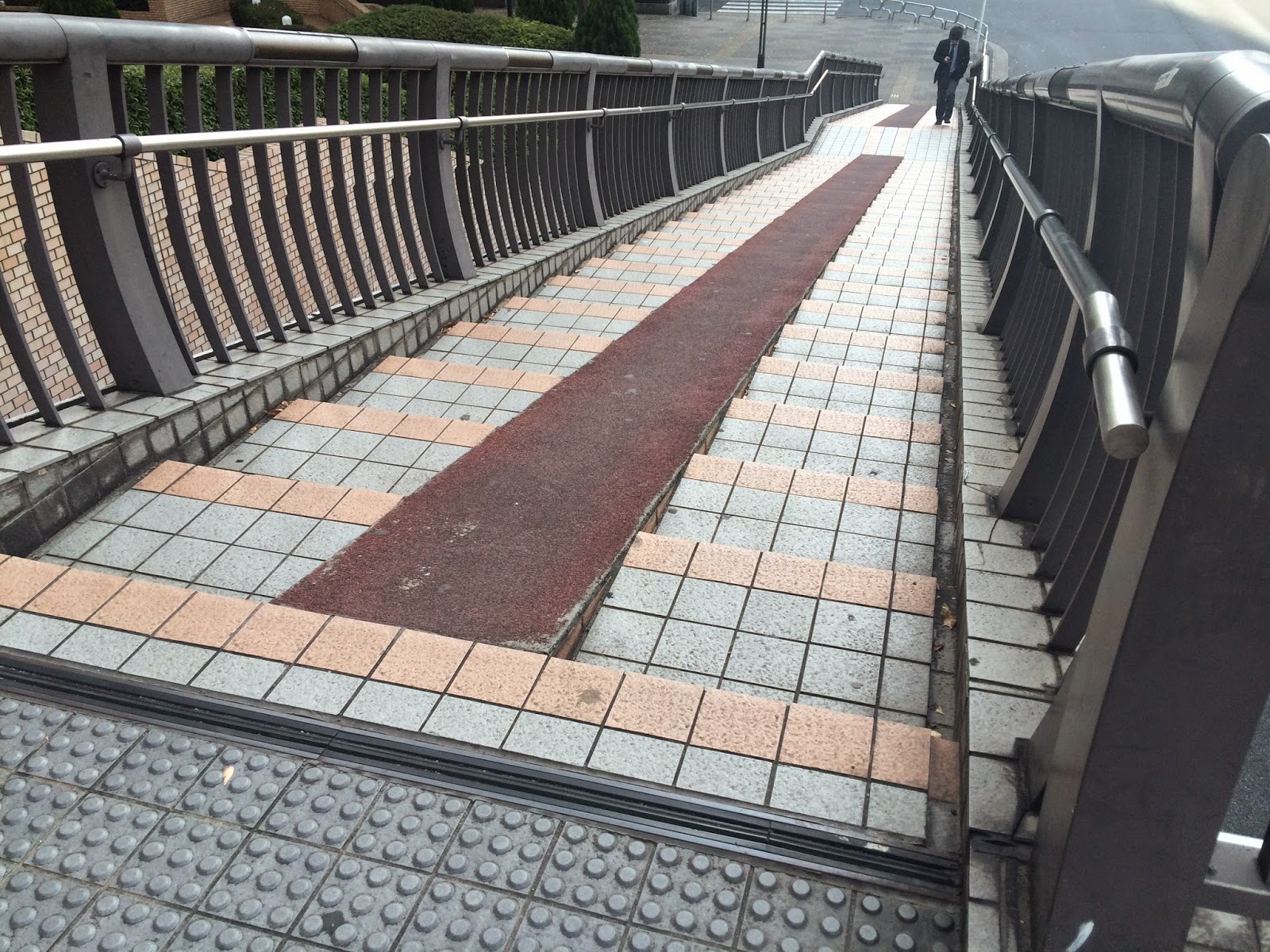 A lot of outdoor staircases had these ramps in the middle. Out of respect for the elderly, when they are too old to care for themselves, they load them up into a wheel chairs and send them down into traffic.