Everyone almost died in a car accident

November 30, 2018
We were in a car accident and everyone almost died. But luckily, we are all ok. Yeah!
I wish I was being sarcastic but sadly I am not. And sadly, Imagine Dragons is a sucky band and the radio keeps playing them.

We were in Ohio for the day of giving thanks a.ka. Thanksgiving, aka. the day we celebrate murdering the native Americans. Anna was driving and we were headed to meet her sister and her son to go to the movies. We pulled onto a country road and we were t-bonered  in the side by another SUV at full speed. Maybe 55-65mph. This particular intersection had houses on the corner with trees and the cross traffic did not have a stop. Visibly was not good. It was like driving as Helen Keller but with hearing.

We got hit on the passenger side where I was sitting. All the airbags went off and we were pushed into another car that was stopped at another stop sign.

I remember looking out the side window the moment before we got hit and thinking, "why is this car not stopping?" It was one of those moments where people say time slows down. Actually, that is not scientifically correct. It would be more accurate to say "my brain sped up". So, at that moment it felt like my brain was speeding up. 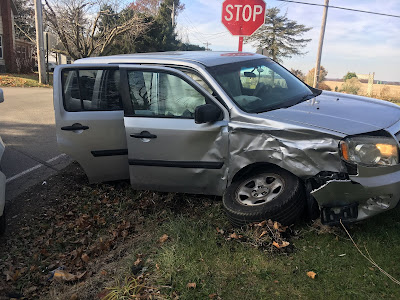 I asked the body shop if they could fix this since only one wheel fell off.
They said, "no"

Anyhow, after we came to a stop, I looked behind us and all the kids were ok. That made me not as concerned.

The couple mentioned that "we get 30 accidents here a year!".

The kids were still a little hysterical and they saw blood running down my face. I had a minor cut by my eyebrow but it was really minor.

I called 911. An ambulance came. The police came. The tow truck came. My sister and brother-in-law came. Stormy Daniels did not come . Not then and not with our president. Everything got wrapped up in about an hour and our Honda Pilot was towed to someplace.

Then , we rented and mini van to drive home the next day. The kids loved the mini van.
They wanted to keep it. I just can't drive a mini van. I have a disease that make me not want to drive something ugly.

Anna went to church on Sunday to be thankful we were protected. I went to the internet and thanked the scientists for the technology that allows cars to crash lat high speeds and no one dies.