It was Anna's first mother’s day Sunday and she should win the national mother's day award for best mother that ever existed.

You might think you have the best mother but you don't.
Can your mother double breastfeed? The only mother that could beat that would be a mother of triplets that could triple breastfeed. That mother would have three breasts and would be a freak of nature and it sickens me just to think about it.

Anna is managing three days home alone with two newborns. She has help from our nanny part time on Tuesdays and Thursdays. Three days a week alone is just crazy and she's able to do it. Unfortunately, Stella and Xavier are still going through their colic/psycho phase. If there's a TV show that needs two babies to play the part of newborns that are possessed by aliens from another universe that communicate by screaming at each other, well these are your kids.

Taking long walks in the stroller is the only thing that calms them down so Anna has been going on a lot of long walks lately. The other day she walked to Ohio.

Our nanny, Kasia, will start full time in June. Anna and Kasia gossip in Polish a lot so I don't know what they are saying. Sometimes they giggle like little school girls. I think they're talking about me. They could make fun of me in English. That's what everyone else does. 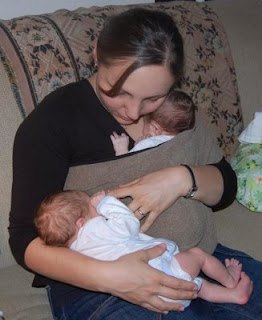