Yummers, tastes like something that doesn't taste that good..

We started feeding the kids rice cereal this weekend.

The truth is, we tried last weekend but Stella and Xavier cried too much so we decided to give up and let the nanny do it. That's why we pay her, right?

We gave it another try though, realizing we're not yet high enough on the social food chain where I can look at the nanny and be all, "Have the children dressed and ready by 3:00pm. We will be having tea with the chancellor and I don't want these dirty little kids ruining my efforts at entering the Arabian horse races. "

If we were having tea with the chancellor I would make Xavier wear knickers and give him one of those giant lollipops. I would not ride a white horse, though. It would get dirty.

I didn't know what rice cereal was before having kids because I'm dumb or not that smart.

Rice cereal is like that hot cereal Cream of Wheat or Farina that old people eat when they've lost all their teeth but can still feed themselves.

Xavier did not have the patience to wait for Anna to put the spoon into his mouth. The moment he saw the spoon approaching his face he grabbed it with one of his chubby little hands and shoved everything into his mouth faster then a particle accelerator propels atoms.

Stella, on the other hand, showed the grace of a little lady and smeared food all over her face and then ate some of it.

Overall, the kids did well until they started crying…probably because rice cereal tastes like crap. I got some in my mouth. It needed something, like less crap. 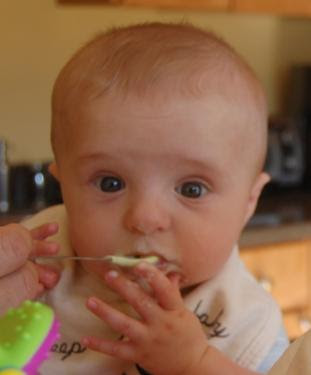 Here's a close up.

Stella is concerned about something. Probably this crappy rice cereal. 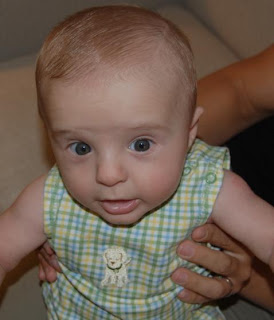 I put some stuff in Xavier's hair to give him a little part. Not sure if that makes me or him weird. 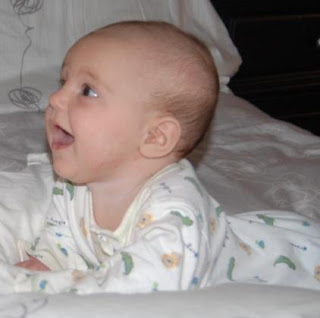 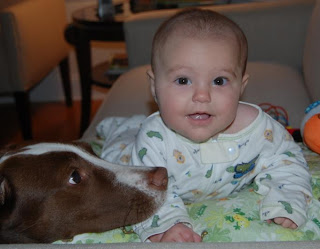 Roxie is waiting for Stella to burp up milk so she can lick it up. Yes, gross but it really makes cleaning up after babies easy. Sometimes when we're tired and don't want to give baths we put the kids on the ground naked and let the dogs lick them clean.