So, I had to go to the emergency room Sunday morning after having a relapse with my back pain.

I thought I was in the clear since my pain went down significantly over the last week and I was getting a lot stronger in my right arm. Lesson learned -no more high kicks during my David Lee Roth musical that I am working on it will be so awesome call if you are an agent.

The pain started coming back slowly like a retarded person Saturday evening and got so bad overnight I had to drive myself to the emergency room around 7am Sunday morning. It really sucked Barbie balls for Anna because she had to cancel a brunch with friends and watch three kids all day.

Let me tell you, I hit the jackpot. No waiting! It took not even 15 minutes to go from the front door to the doctor’s face. All the other patients died before I got there. Best emergency room ever!

First, the hospital people tried using Norco pills to stop the pain but it didn’t work. Then, they gave me an IV of Dilaudid, which took away the pain and my boner. After an hour or so, all the pain came back so they gave me another dosage. It was like being a Rock Star without the band and low self-esteem manifesting as a larger than life persona.

Finally, someone in the room determined that I needed an MRI. I think it was the cleaning person. Honestly, it could have been. The garbage can was talking so loud I could hardly hear what anyone else was saying.

The MRI was the exact same kind used on TV. It was a big tube and these people put you in it and someone says, “computer activate” and then it makes a bunch of noise and you pop out the other side. 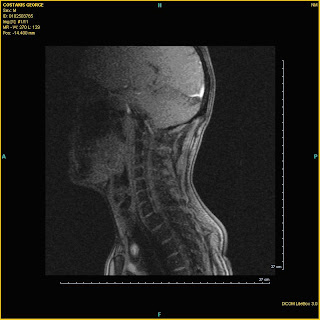 This doesn't even look like me.
The MRI showed that I had Foraminal Stenosis of the cervical region. Why do I have a cervix? What is a stenosis? Who is Foraminal? Why is the Earth Round? It’s not, it’s an oblate spheroid.

This entire situation is frustrating because I make a big effort to do a few hours of Yoga every morning and I’m very careful about not over doing it. Right now, I cannot do the handstands or arm balances because of weakness in my right arm and it pisses me off so much I could punch Mother Teresa's dead body. 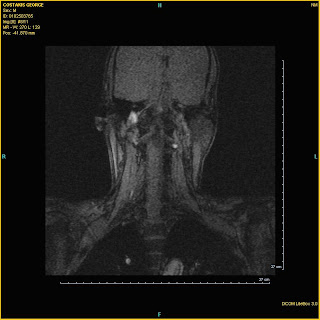 Unfortunately, the one thing I’m NOT careful about is the way I pickup our kids. I really need to watch out for this. From now on, no more touching the children. It is for my own safety.

Six hours and a bunch of drugs later they let me go out the front door like I was leaving some mental institution that lost government funding.