Skip to main content
October 02, 2012
Anna’s dad, Anna and I ran the Northwestern Ohio KomenBreast cancer 5k on Sunday. Every time someone dies from breast cancer, a relative (who is still living) sets up a 5k race to raise money and awareness.  In this particular case, it was Susan G. Komen who died.

When I die I would like someone to setup an all nude 5k because that is what the people want. 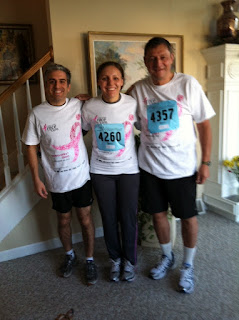 It was great running weather; cool 65 with very little sun.

I like running 5k races but I won’t run anything longer anymore. A 5k is just the right distance. By the time you feel like dying, you can see the finish line. A few girls from a high school cross country team passed me right at the end when we were going over the finish line. WTF Whores! You know they slept with the entire football team that morning.  I placed 183 out of 2414 at 22:52. I didn't want to post my numbers because this isn't about numbers, it's about breasts and we need to stay focused on that. But, after a lot of thought and conversations with my family I decided to go ahead and make the decision to do it.

It is important to note that I stick primarily to a rigorous Yoga routine Monday through Friday mornings and very little running. I’ll put in about 2.5 miles of running on Saturday and Sunday mornings. That's all. This is important for absolutely no reason except that I like to promote Yoga at every chance I get.