The Godmother has been hand-picked to fulfill the prophecy

We had an odd weekend.

Many long times ago, Anna treated a woman for health issues who went on to miss all her future appointments and was never to be seen again. This woman is Polish and was always accompanied by her mother-in-law who was also from Poland. They immediately thought Anna was family when they found out she was also from Poland. Well, said woman felt bad about missing her appointments and came with her mother in-law a few months back bearing gifts like it was the old country; apples, wine, chocolate, abortion hanger.

Then, they broke the news to her that they named the newborn baby after Anna. Then, they asked Anna to be the godmother. She declined because this was too weird but the mother-in-law insisted and Anna caved.

So, there we were Sunday morning at 9:00 am, headed to this family’s house on the way, way south side of Chicago to get pictures taken before baptizing a baby we did not know.

Our babysitter watched the kids because I was not going to watch three of them in church while Anna played fairy godmother.

Everyone was so excited when we arrived at the house. There weren't that many people there at all. It was only the mother in-law, father in-law, mom, dad, the baby and their three older kids plus the Godfather and his wife. They gave me a shot of Vodka in the first ten seconds.

Here’s the back story. The parents of the baby have eleven year old twins plus a seven year old son. The father quit is truck driver job for reasons I don’t understand and the mom doesn't do anything. The grandmother was pissed that her daughter in-law got pregnant again because the grandmother does everything around the house and the daughter in-law won't use a different hole . 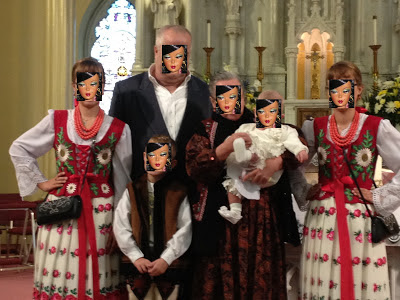 The kids wear traditional Polish mountain clothes
at church each week or all the time I guess. I didn't think I should put people online
we don't know so I picked a face that looks close to them.
I mean, the grandmother literally raises the three kids (now four kids). This grandmother comes over every morning before the kids wake up, gets them ready, feeds them, gets them to school, goes back to the parent’s house and cleans it, makes food, get the kids from school,….you get the point.  The parents are checked out or dumb or something. I have no idea. The dad clearly has a problem with alcohol which means he drinks too much of it.

Amazingly, the kids are really bright. They all play violin, they were well behaved, they spoke very intelligently. I was really impressed that “child protective services” hasn't had to take them away to the orphanage where Annie lives the hard knock life.

The grandmother confided in Anna that she hand-picked her as the godmother and namesake so that this child would grow up to be a strong, smart woman like Anna. Ok, doesn't make any sense but it seems to be working for the other kids.

We also learned that the first Godfather backed out so the grandmother found her third cousin’s granddaughter’s husband to do it. They had never met the family before that morning. 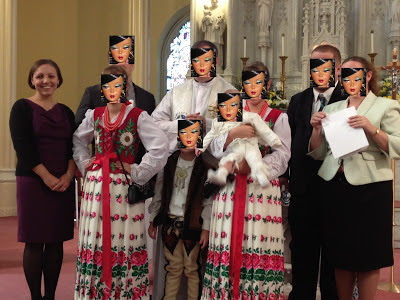 ﻿
The happy Godmother and her new family.﻿

The entire situation was weird on so many levels but it ended up being pretty fun. Everyone was actually quite pleasant and spoke enough English that I wasn't left out of the conversation. We went to a traditional “highland” Polish restaurant after church because this family was from the mountains in Poland. It’s like saying you are from the South if you are an American. Take that to mean whatever you want but we all know what it means.

The restaurant made its own Vodka. I stopped after two shots but everyone else had maybe ten or more because that was what God wanted for the new baby.