Spider dance and an Elf on the Shelf


Can you beleive this kid refuses to take dance class with his sister. Note the twirl at :24 seconds.

When Xavier comes home from school, the first thing he wants to do is change into his Spiderman pajamas. The pajamas are not an accurate representation of what the real Spiderman wears.  Some idiot added web "wings" to this outfit. It totally PISSES ME OFF so much that someone would do this I could bitch slap a puppy.

Anna's cousin's wife ( so our cousin in-law) and Anna's cousin by proxy bought the kids this book in anticipation of Christmas.  It is really cool...thank you cuzes.

Basically, it tells a story about how Santa sends out elves to report back about kids who have been bad.  It comes with an Elf. Kids get scared that the Elf will tell on them and they don't misbehave.

"The tradition begins when Santa sends his scout elves out to Elf Adoption Centers, waiting for their families to bring them home. These patient elves hibernate until their family reads The Elf on the Shelf, gives their elf a very special name and registers their adoption online. Once named, each scout elf will receive its Christmas magic and become part of the family's Christmas each year. At the start of the season, the elf appears and serves as Santa's eyes and ears and each night the elf travels back to the North Pole to report in to Santa. The gift set includes an elf (female with light blue eyes and brown hair), hardbound book and keepsake box. Imported. "


Anna read them the story last night and put the Elf in the box next to Stella's bed. After Stella fell asleep, Anna took the Elf out of the box and put the Elf on the window sill in the upstaris hallway. When Stella woke, she looked in the box, didn't see the Elf , and went running down the hall. She saw the Elf on the window sill and couldn't contain herself. She was so excited it came alive during the night she started yelling for me to come and look. 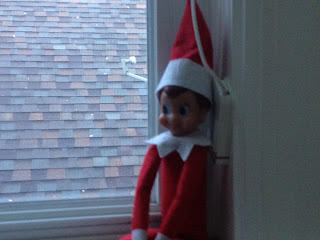 Honestly, I was surprised Stella believed it came alive. Xavier was confused. He wasn't buying the story but he couldn't explain how it got on the window sill.

I don't like using the" Santa won't bring you gifts if you are bad thing" so I won't enforce this idea. But, if this makes them behave for a day or so it will be a bonus.

Xavier's final declaration,  "If the Elf tries to tell Santa I am bad I will throw him into the fireplace".