So our youngest Fiona aka “Fifi” started pre-school yesterday with her brother and sister this week.


It’s a Polish school because of Anna being from Poland and all. Each time her brother and sister would leave for school on Tuesdays and Thursdays she would cry and cry.

Each day leading up to her first day we kept telling her she was going to go to school for the first time. I can’t tell you how excited she was.

Anna took them to school Thursday and said she didn't cry at all. She was so beside herself that she was allowed to stay. I suspect it’s because we are awful parents and going anywhere is better than being at home. But we have a Nanny, so we’re not home anyway. Ok –theory wrong. 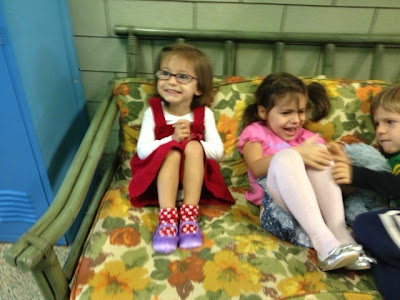 Here is our dilemma though. The Nanny has no kids to watch on Tuesdays and Thursdays and doesn't want a pay cut. She offered to clean the house all the time and we could stop paying for someone else to clean because yes, we live in the Hamptons and are a snobby rich family and won’t lift a finger to do any manual labor unless it’s to show someone the door. “There’s the door. It’s a wood composite made to look like walnut. Isn't it beautiful? ”

She also offered to cook but I’m not so sure she can cook that well. Maybe if she served us dinner like we were at a restaurant it would make her cooking taste better.

Basically, we have fallen off the deep-end and have hired out all our domestic duties. If we were all black and the Nanny was a man and we lived in California we would be the new season of “The Fresh Prince of Bellaire” and Will Smith is totally sleeping with men.

Let’s see how this arrangement works out before I decide to have a brain heart attack.