Someone tried to murder me last night. This is the second time that I know about

June 19, 2013
Someone tried to murder me last night. That isn’t even an exaggeration.

At about ten o’clock last night, I was standing in front of our kitchen window getting things wrapped up for the night, when BAM …the glass on the window shattered. If you remember, the bedroom window was shattered a few months ago which prompted us to find another place. We can’t move until three more weeks for reasons I will tell you in a few days. 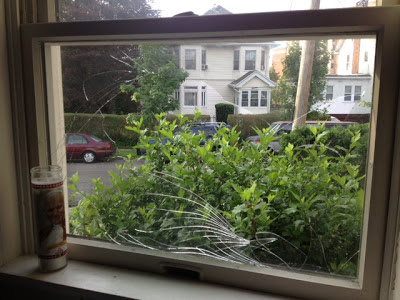 
This time though, I wasn’t asleep. Everyone else was in bed. I looked out the window but didn’t see anyone so I went out the front door to kick some ass bitches! I really have no idea what I would have done. I didn’t see anyone. I heard the neighbor next door standing on her porch talking to the police on her phone.
After she was off the phone with the police, she told me that she saw a guy hiding behind a tree across the street.  She suspected it was her neighbor who she has been having trouble with. Um, and why was she watching him? Because he’s been slashing the tires on her car and she can’t catch him in the act. WTF!

But, then she saw him run towards our house, throw something, and run up the street.


The police came and we all had a good laugh.   An officer asked me if I had any "enemies" that might do this. Have you read my blog? I probably have stalkers, nancy pants. I'm that famous.

This time our landlady and the tramp came to the house and spoke to the police. She had video cameras installed after the last incident so they were able to find this entire attempt on my life recorded.
The cameras have night vision but the guy had on a hood so we couldn't see much. He was light skinned and skinny. Does that sound like anybody you know? Email me if it does.

We know this has something to do with the landlord's, daughter's ex-boyfriend/drug dealer/gang banger or someone that has it in for the landlord or her daughter. They used to live in the house. Who does this at 10pm anyway? Aren't you supposed to vandalize property around 3am so no one sees you?


Oh, and one thing I did find out. Her cameras are hooked up to the internet so she can watch from her phone and she can see into the kitchen window.
Can’t wait to move and get back to being upper, upper, upper, upper middle class.
2013 new rochelle

Unknown said…
You missed some action in your old 'hood last week. It wasn't quite murder, but I found a man stealing the dry cleaning from my neighbor's car late at night.
June 19, 2013 at 3:22 PM

Unknown said…
With the camera and the lanlord's opportunistic viewing, maybe she knew you were standing there... In your skivvies...dancing to "Beat"It" and she wanted to shock you back into a NYC kind of reality...
Just say in'...
June 19, 2013 at 4:03 PM

Michelle Cooper said…
wha??? you should come stay with us and dan will feed us all popcorn and the kids can go nuts with toys until you move.
June 19, 2013 at 9:33 PM