It was my first father’s day last Sunday!

With babies so young, it’s really a lot harder to be the mother than the father. Nature curses mothers with these hormones that make them think at any minute their baby might explode. Dad's can relax, drink beer all day and let their babies crawl around in poo while they flick boogers on the wall. Men are awesome.

I don't know how or why people sleep with their babies in the bed. We did that for a week when the kids refused to sleep and it was awful. We started putting them in their own room for naps so we can transition them out of the cribs in our room.

When the dogs slept with us and got annoying we would just kick them out of bed...literally. I'd jab them in their little butts with my foot and they’d hop out. The kids are too small for that so I had to pick them up and toss them out. One time I totally missed their crib. Oops.

The nanny, Irena (say it the Polish way), started part-time this week so Anna could train her. She is fantastic. One day when I learn Polish or Irena learns English we'll have a conversation. Until then we communicate via an Etch-a-Sketch but it takes so long drawing pictures with those two stupid knobs. Another hiccup is she can't pronounce Xavier (that’s ‘Zavier’, with a 'Z' sound) to save her life. What she is going to call the little guy? I mean really, what is she going to call him.....The Boy Baby? Oh well, at least she can point at him.

Since Irena is a mother, grandmother and nanny she will totally be able to take over so Anna and I can play video games and go to our swinger parties. She even folded my work-out clothes 'cause I threw them in with the baby laundry! Next time I'm going to leave recipes around the house and see if she makes them. Is that wrong? Yes it is.

Anna had a photo shoot day, yesterday, and decided to put the kids in this thing call the "Bebe Pod". Our friends Christy and The Rodfather gave them to us. 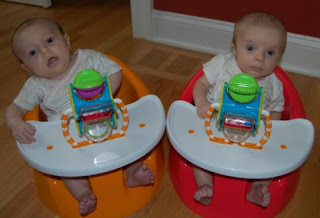 Stella needs more head control. I can't even imagine what Xavier is thinking. 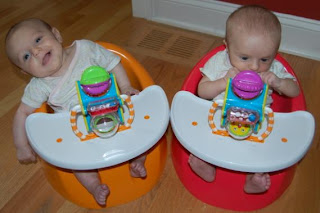 Xavier loves anything that moves or flashes lights. Stella is laughing at her mom taking the picture.

Stella, cute and smiling. Come on Xavier!!...look at mommy. 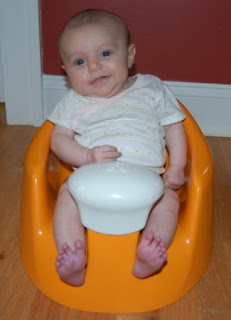 Something is just weird about this 'Bebe Pod' in my opinion. Come on Stella, sit up straight. You don't want bad posture. 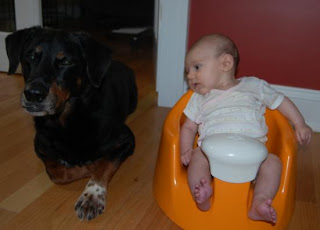 Anna is saying 'Stella, Stella.." trying to get her to smile. But, Bella, our dog always thinks we are calling for her. So she came over and lied down. We did not predict this name rhyming problem. Our dog must not be too bright. crap. 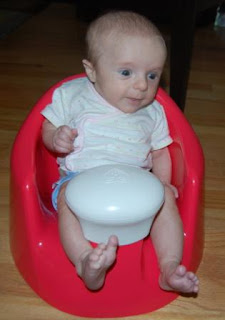 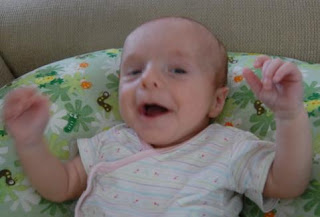 Yes, Xavier is wearing a girl shirt. We don't have time to sift through a pile of outfits. Who cares anyway? He's so damn cute who's gonna look at his shirt? :-)