So we went to my *fake cousin's wedding this weekend in Cleveland. This was the first road trip for the kids and they did not once ask us if we were there yet.

The car was so full I thought we were a garage sale. Each kid is about size of a cantaloupe so why do they need so much stuff? Because they're spoiled, I figure. They cry when they don't have a clean diaper or a clean shirt or food. Sometimes my diaper isn't clean and I don't cry.

One of the "issues" about traveling in a car with young babies is how to feed them. Some "rule" says you can't have two babies in your lap while driving. Hence Anna can't nurse in a "moving" car. She could but it would be "illegal". I'm over using double quotes... I know that.

Anna got this handy dandy car adapter for the breast pump. She just puts on her hands free pumping bra, plugs the breast pump into the cigarette lighter and fills up two bottles with wholesome mom milk while I drive. Some truck driver might have a picture so keep a lookout on the internet. Anna then jumped in the backseat and fed the kids via bottle.

If you're asking, "Why not give them formula or pre-pumped milk?" Well smarty pants, when nursing you have to empty full breasts every few hours or they will pop....so I'm told.

The wedding was our first outing without the kids. Anna's sister Aunt Duda watched them. I don't know how she did it. When I'm alone with them for more than an hour I get drunk and pass out so I don't have to do anything. She did a really great job. They came back unharmed. She even took these pictures to prove that they were well taken care of. 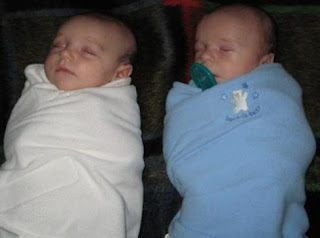 Aunt Duda puts Stella and Xavier to sleep. We are the parents so of course we think they are cute but come on? Aren't they the cutest babies ever? :-) 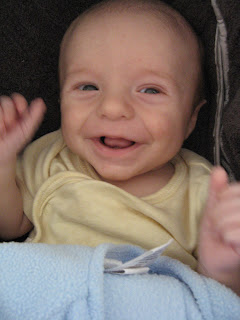 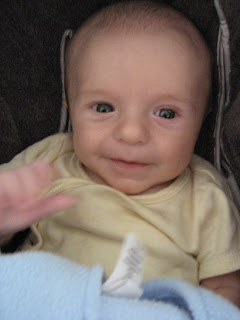 We always have a hard time capturing a good picture of Xavier, but these do it. He is such a silly,silly little man. 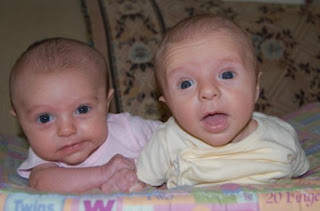 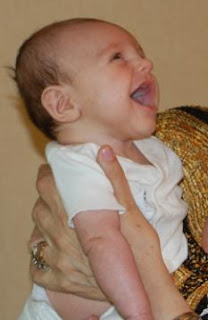 Stella laughing while Yaya holds her.

Anonymous said…
1st comment yay!!!! i'm a stalker. those are uber cute pictures, and congrats on your successful first road trip with the babes =)
June 9, 2008 at 3:41 PM

Kerry Lynn said…
You, my friend, are funny. I'm sure you don't need a random person to tell you that but I thought I would anyway.