So, some big houses are/were on the market here in Chicago.

Rosie O'Donnell moved here six months ago from New York City to host a new show on the Oprah Winfrey Network. In the process, she bought a $2.25 million, four bedroom house, a few miles south of us.  Her show had a large studio audience at first. Then, after a few weeks the producers trimmed the audience to 100 people. Then, they got rid of the audience altogether. Then, her house went on the market.  Rosie claimed she put the house on the market because her kids only came in on the weekends so the backyard wasn't getting used. Ok, makes sense, NOT. 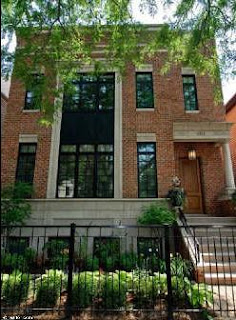 Every new construction, million dollar house in Chicago looks like this.
It was determined that after each show she ate the audience. I'm sorry, that was low. It won't happen again. Let's wobble on.  The good thing is,  she was able to sell the house only five hours after it went on the market for even more money; $2.5million!! I smell a rat. You all know Oprah bought it. Anyhow, it's since been revealed that Rosie is moving back to New York to film the show.


Now, an even bigger house.  Michael Jordan (the same one as the sneakers) is selling his house for $29million. It's the highest priced listing in Chicago. Look at the outside. 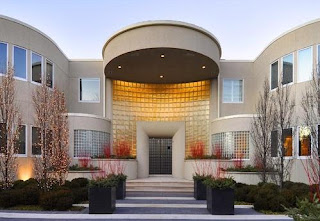 This house looks like such a piece of crap. What is that glass block barf in the middle? I am not even going to go see it. Can you imagine inviting people over to your new house and them being all, "Where is your house? All I see is this college dormitory that's trying too hard."

Maybe if he wasn't spending all his free time banging groupies he could have taken two seconds to look at the drawings before construction started.