It's been hot has Haiti; that place no one remembers had a massive earthquake some time in the past

The weather here in has been amazingly warm, at least 80 degrees Fahrenheit or that’s 26.6666 Celsius for people living in every other country that uses a normal system of measuring.

Last year at this same time, we had a massive blizzard that killed some people. This year, we took the kids to the beach. 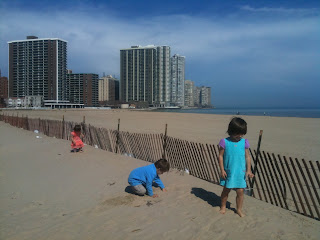 That wood fence is put up in the winter for some reason. I think it's to keep people from accidently walking into the lake when there's snow on the ground. Every year there's like five people that fall into the lake and drown.  These aren't people The Mob are trying to kill. These are real people.

I forget how nice we have it with these beaches minus the closings during high bacteria days. 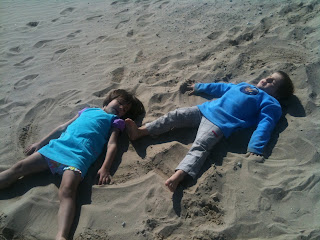 The twins made sand angels.  Yes, Xavier has on a sweatshirt. He didn't believe us when we said it wasn't cold outside.

After the beach we went home for naps. While opening our front gate, carloads of Jehovah witnesses emptied onto our street. They’re always very nice but boy were there a lot of them. They had maps of the blocks to make sure they hit all the houses. We finally had to put up a “NO SOLICITING SIGN” in the door. It actually says, “Don’t go way mad, just go away”.

It gets too be too much trying to get kids dressed, fed, ..etc..and some random person rings the doorbell. Anyhow, we got the kids down for naps, Anna dozed off and I sat on the sofa and ended up dozing off for two seconds when someone starting knocking at the door.

The dogs started barking and I was sooooooo pissed.

I ran to the door and opened it in a fit of rage. I saw a guy with a clipboard and he gets out of his mouth, "Are you registered..." Then I'm all, "God...fucking...what the helll, no! Argh, I just got the kids to sleep" And slammed the door.

I would have been nicer if I had my wits to me.  Later  I realized the guy might have been our neighbor that lives two house down volunteering for the election.

Once the kids were up from naps we took them to the park and then this Thai restaurant that is always empty at 5:30pm. An empty restaurant is the only restaurant we bring our kids to. They LOVE broccoli from Thai restaurants.  The server was surprised when the kids cheered at the site of a  plate of broccoli binging brought out.

While I was paying the bill, the kids grabbed some free flyers by the door and waved them around from the wagon on the way home. Once we got home, Anna read the flyer to me. 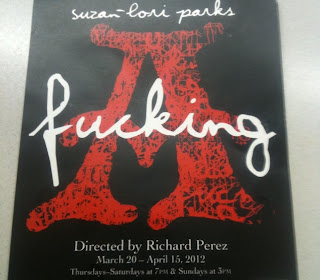