The Avengers, NATO and a Squirrel

Anna and I got a baby sitter and went to see the avengers Saturday night. For the record, Anna said it was, “the most boring movie she has ever scene”, even though we all know that is not true.

Two half brothers from another galaxy find there way to Earth. One brother agrees to find a lost energy cube in return for an army that will enslave humans while the other brother teams up with super heroes to fight them. Sounds way better than The Great Gatsby.

NATO was in town this past weekend planning on how to keep poor countries poor. The city was on lock down. We couldn’t park in my work parking spot to see the movie but we were lucky enough to find an open space on the street. The cop said the car would be fine because they weren’t enforcing parking on that side of the street.

Well, Betsy, when we came out of the movie our car was gone.
This secret service woman was standing there like a South American hooker.

I thought it was towed to the pound, which would have meant taking a cab to the lot and then paying $150 to get it out. I went into my “I will be breaking some heads" voice before even waiting for her to explain. It's a deeper voice with a strong attack and short decay. It can also be used on children.

She was all, “Sir, sir, we moved all the cars down the street”.

Ok, well then, I used up my angry voice for nothing. The car was towed a block away and it took us like one minute to get it. But that's a minute I'll never get back!! 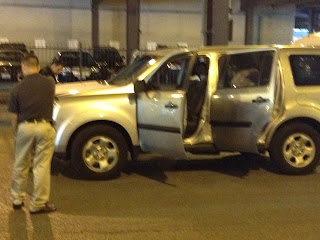 The following Monday, my car was searched by the secret service before I could pull into the parking garage. The garage is attached to the hotel with dignitaries. Did you hear me? Dignitaries!!! They are so cute.
On a lighter note. That night, the kids went out to play while I put dinner on the table. When I turned around a squirrel had walked in the house. I took this picture before doing anything because I realized that other bloggers take pictures of stuff before they do anything. Oh look, a tiger is mauling someone…snap snap. It doesn't matter, they were already ugly. 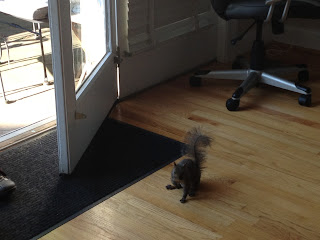 The kids were so surprised at the sight of a squirrel in the house that they wouldn’t move away from the deck so that the squirrel would run back out. It got scared and jumped up to the window sill and looked back out the window at the kids. Finally, it left on it’s on reconnaissance.