February 07, 2012
I got my first of five acupuncture procedures today. I couldn’t wait to be poked with some wood.

The acupuncture clinic is located downtown in a nice building next to a steak house. Is every new restaurant these days a steak house?

I went up to the 21st floor because that’s where the clinic was and was greeted by a Yamaka wearing Jewish receptionist wearing his Detroit sweatshirt over is Tzitzis. I don’t think he was Chinese. I also don’t think he realizes that Detroit is a shit hole. No offense people but come on already.

The waiting room was very doctor office-ish with all kinds of people; young and old, ugly and uglier. I filled out a standard patient form after which I was greeted by the acupuncturist and brought to a patient room. The acupuncturist was also not Chinese.

Where is this Oriental medicine school finding all these white people is beyond me but I better see some Chinese people soon. 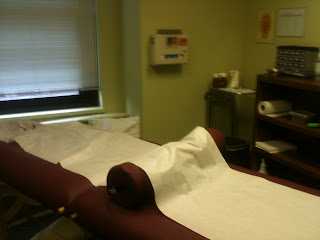 The room again was very doctor office like. She did a patient history, took my blood pressure and then explained what she would be doing. “I’m going to stick small needles in you. You will have no idea what I am doing. It is an ancient Chinese secret”.

She asked that I take my shirt off and lie stomach down on the table. I don’t have any pictures of this part but I looked good. Trust me.

Needles were inserted in the back of my neck, the outer right arm, my ankles, both wrists and my calves. The only one that hurt a little was the one close to the elbow. In fact, it still aches. She told me it would before sticking me so at least she knew something.

She dimmed the lights, turned on a heat lamp and asked that I lay still for the next 15 minutes. 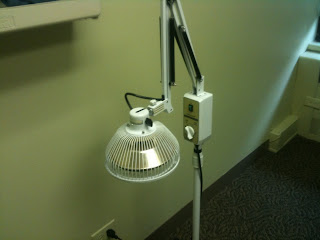 This is the heat lamp. It make heat.
I kinda dozed off during those fifteen minutes and was awoken when she came back.

When I was checking out this girl, sorry woman, in front of me was buying a pile of herbs. They gave her the bill and she was like, “I should sign over my financial aid money to you.” Um, or you could not buy everything you see psycho.

Then, out of seemingly nowhere the other room, a male Chinese acupuncturist walked into the waiting area while I was leaving a said, “Hi.” I could have peed my pants.